The Manchester United star said he would keep "trying to give children the things I didn't have when I was a kid". 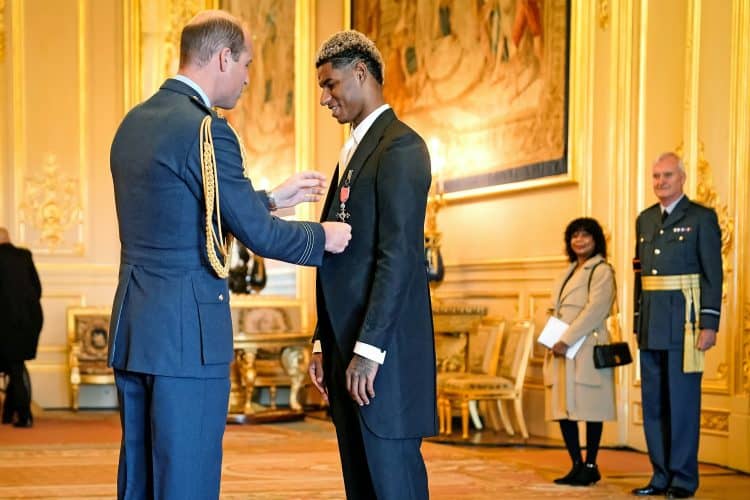 Footballer Marcus Rashford is made an MBE (Member of the Order of the British Empire) by the Duke of Cambridge during an investiture ceremony at Windsor Castle. Picture date: Tuesday November 9, 2021.

Football star Marcus Rashford dedicated his MBE to his mother as he vowed there is more to come in his campaign to help disadvantaged children.

The England and Manchester United striker said his motivation was to give the nation’s youngsters the things he did not have when growing up and stressed every child deserves an “opportunity”.

Rashford waged a high-profile campaign last year to persuade the Government to provide free meals to vulnerable youngsters in England throughout the school holidays during the coronavirus pandemic, forcing Prime Minister Boris Johnson into a U-turn.

Speaking after a Windsor Castle investiture ceremony, the striker said he would be giving his MBE to his mother Melanie who raised him and his four brothers and sisters.

He said: “It seems like there’s a lot going on but for me to put it in the simplest way – I’m trying to give children the things I didn’t have when I was a kid. If I did have, I would have been much better off and had many more options in my life.

“I’m just giving them the opportunity and I think they deserve the opportunity what child doesn’t. For me it’s a punishment for them not to be getting things like meals or supplies of books.

“And if we can all come together to make these small change – they are small changes but they become big changes once you see the rewards of it – I see a generation that’s coming after me as a very special generation. They just need a bit of guidance and pointing in the right direction and what I’m doing is giving them that.”

Accolades have already been bestowed on the footballer, with the striker becoming the youngest recipient of an honorary doctorate from the University of Manchester, which he received last month in recognition of his campaign against child poverty.

Rashford will also be honoured with a special award at the Sports Personality of the Year ceremony on December 20, after the judging panel unanimously agreed his work off the pitch should be commended.

Related: Guess who else eyed up a consultancy gig? Sir Keir Starmer