German festival mocks Boris Johnson and Brexit in a carnival in Dusseldorf. 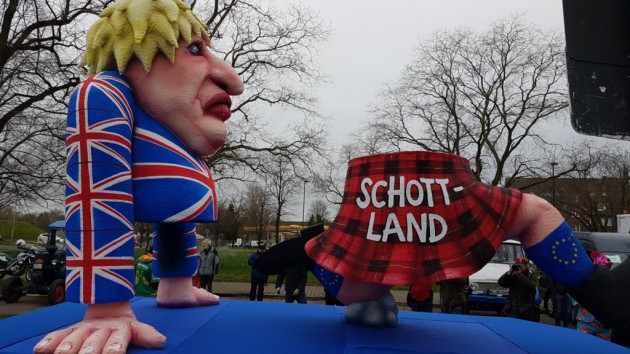 He keeps his designs a closely guarded secret each year until they are unveiled at the famous carnival in Dusseldorf, an annual event that coincides with parades held in towns and cities across Germany to mark the end of ‘carnival season’ which runs from November 11 until Ash Wednesday.

One of the main centrepieces depicts Boris Johnson in a union flag top with Little England on the back – and a kilt with Scotland on it and legs with EU socks marching away from him.

Another depicted US President Donald Trump snuggling up with Iran’s Ayatollah Sayyid Ali Hosseini Khamenei with the slogan: ‘Make love, not war.’

He told The Times: ‘The Germans have only just learnt that criticism is a crucial part of forging public opinion. That’s new and it’s only happened in the past few decades.

‘The Brits have always been ahead of us there. I try to go in the direction of British humour to bring in a hardness, an uncompromising quality, a courage that you hardly ever get here. Things are always a bit tamer in Germany.’

Battle lines have been drawn as ministers on both sides of the Channel prepare to sign-off on their Brexit negotiation red lines.

The EU General Affairs Council is set to meet on Tuesday morning in Brussels to approve the bloc’s mandate for trade talks with the UK, which are gearing up to start next month.

The announcement on Brussels’ agreed terms, which could be controversial after earlier drafts contained what Downing Street read as a veiled reference to the Elgin Marbles, is expected in the afternoon.

In Westminster, the Brexit inner cabinet will also meet at Number 10 to discuss the UK’s negotiation stance.