A horrific image conjured by the Scottish comedian.

by Charlie Herbert
in Entertainment, Politics 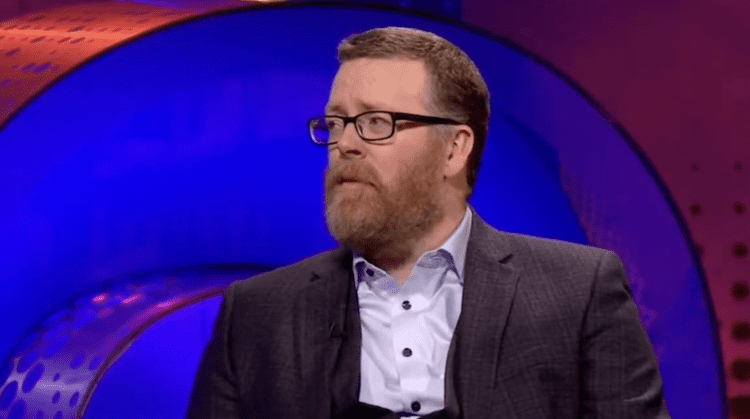 Appearing on Channel 4 show The Last Leg, Boyle was asked for his opinion on Sunak and Liz Truss, the two people looking to take over from Boris Johnson as the next prime minister and leader of the Conservative Party.

And it was his description of Sunak that stuck with most people.

In a clip shared on Twitter on Monday, Boyle said the former chancellor’s “greatest desire in life is to be pegged by Thatcher’s ghost.”

The line got a roaring response of laughter from those in the studio, with Alex Brooker keeling over in fits of laughter.

The often controversial Scottish comedian then said that Liz Truss could become the first Prime Minister to “forget to breathe and just die.”

But most seemed to be still getting over the Sunak gag at this point.

Sat next to Boyle was Tory peer Baroness Warsi, who admitted she was “trying really hard not to applaud or laugh.”

On the same show, Boyle said that outgoing prime minister Boris Johnson should be “dragged screaming into hell.”

Speaking about the PM’s final Prime Minister’s Questions, in which Johnson signed off by quoting the Terminator line “Hasta la vista, baby,” Boyle said: “You finished with a quote from The Terminator. The Terminator! After you killed 150,000 fucking people during the pandemic.

“I don’t want to sound like I’ve got a grudge or anything, but I hope a vent opens up in the ground and clawed hands drag you screaming into hell.”

This prompted 11 viewers to complain to Ofcom.

However the broadcast regulator confirmed last week that it would not be taking any action over the comments.

Sunak and Truss are both currently involved in the Tory leadership battle, and have been taking part in hustings across the country as Tory members prepare to vote on who the country’s next prime minister should be.

At the moment Truss is the heavy favourite to win, with the result of the ballot set to be announced on September 5.