Flashback: To when a Tory government went from an outright majority to having just 2 seats

Having taking charge of the party in June, Kim Campbell of Canada's Progressive Conservatives lost the election and her own seat in October. 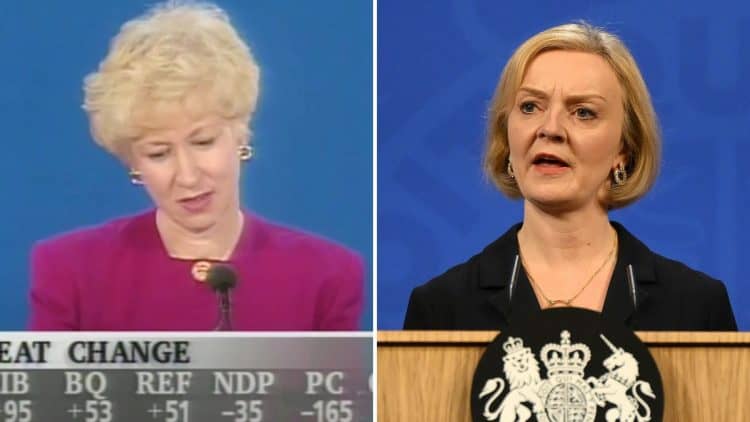 Prime Minister Liz Truss vowed to see through her low-tax agenda as she announced a major U-turn after sacking Kwasi Kwarteng as Chancellor.

The Prime Minister said her mission remains the pursuit of a “low-tax, high-wage, high-growth economy” but accepted parts of the mini-budget last month went “further and faster” than markets had expected.

Admitting she had to change course, she reversed a key policy to scrap the planned rise in corporation tax from 19 per cent to 25 per cent.

Speaking at a hastily-arranged Downing Street press conference, she said: “It is clear that parts of our mini-budget went further and faster than markets were expecting so the way we are delivering our mission right now has to change.”

Shortly before the announcement, PeoplePolling research for TV channel GB News gave Labour a 53 per cent share of the national vote compared to just 19 per cent for the Tories.

The poll is the worst yet to hit beleaguered Liz Truss, giving Keir Starmer’s Labour a remarkable 34-point lead.

It also found that just 9 per cent of voters – fewer than one in 10 – have a favourable view of the prime minister, against 65 per cent – almost two-thirds – who regard her unfavourably.

A result on these lines would deliver Labour a landslide three-figure majority in the House of Commons and threaten near-wipeout for Tories.

According to user-defined predictions from Electoral Calculus, it could leave them with as few as four seats – making the SNP the official party of opposition.

Such an outcome would be extraordinary, but it wouldn’t be without precedent.

In 1993, the Tories in Canada came away with just two seats, taking them from a party with consecutive majorities in government to having no status at all.

Kim Campbell took charge of the party in June 1993 after Bill Mulroney resigned in the wake of declining popularity.

In the federal election in October of that year, the Progressive Conservatives were decimated, losing all but two seats from a previous majority, with Campbell losing her own.

Her 132-day premiership is the third-shortest in Canadian history.

Ten years later, the membership voted to dissolve the party and merge with the Canadian Alliance to form a new party altogether.

Related: Odds on Liz Truss to leave this year are plummeting