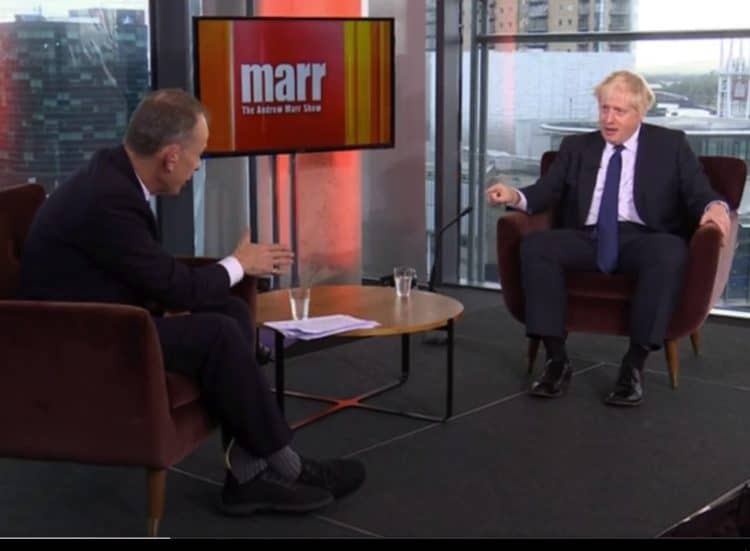 Boris Johnson was finally called out for spreading untruths on the Andrew Marr show this morning.

Speaking ahead of the Conservative Party Conference in Manchester, the prime minister claimed that we are finally seeing growth in wages.

He said: “After more than ten years of flatlining what you are seeing is people on low incomes being paid more.”

But Marr was in no mood to let his questionable assertion slide. Interrupting the PM he said:

“The Office of National Statistics, your own body, said in the last reporting period wages are not keeping pace with inflation.

“So in other words, in real terms wages have gone down not up.”

The prime minister has been called out for ‘truth twisting’ on several occasions over his tenure in high office.

LawyerPeter Stefanovic told TLE that the PM has “driven a cart and horses through the ministerial code and put democracy “at risk” by “telling barefaced lies”, with a film documenting his untruths surpassing 35 million views.

“That was the whole point of my film,” Stefanovic said. “Not just to show that Boris Johnson has, week after week, been giving inaccurate information to MPs – and then refusing to come back and correct the record. He’s broken the ministerial code every week.

“Why are we concentrating on speculation over whether Johnson broke the code over the flat refurbishment? He’s already broken it. So what are we going to do about it?”

Dawn Butler also urged people to call on their MP to help stop politicians from lying in the House of Commons.

The Brent Central MP tabled an Early Day Motion calling for MPs to have power over the Ministerial Code, which holds ministers to account and prevents them from lying in Parliament.