"Peace in Northern Ireland is threatened, there are shortages in the shops and crops rotting in the fields. It's time to say loud and clear, Brexit is not working." 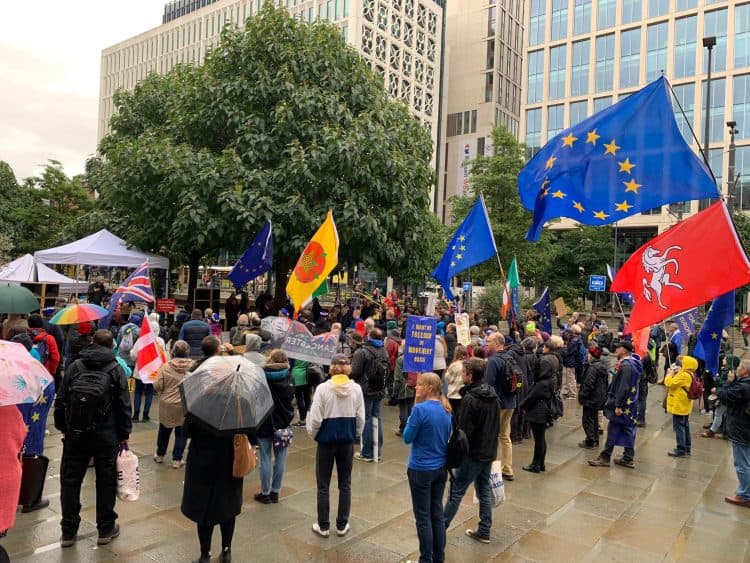 Protesters gathered outside the Conservative Party Conference this weekend demanding a better deal with the European Union as Brexit continues to wreak havoc on the country.

Manchester for Europe along with a coalition of allied national and local campaigns met outside theconference centre and Midland Hotel, saying there is now popular demand for action to tackle our growing national crisis and set a new direction.

“The Tories’ ruinous Brexit deal is trashing the country,” the protesters said.

“Peace in Northern Ireland is threatened, there are shortages in the shops and crops rotting in the fields.

“Small businesses are being crushed by Brexit red tape, whole industries are threatened, some are trashed.

“It’s time to say loud and clear, Brexit is not working.”

They also called for the Policing Bill to be scrapped, saying it introduces “sweeping and unnecessary powers which even the police don’t want.”

The organisers say: “Now the Tories have pushed through a divisive and ruinous Brexit deal and been elected on a pack of lies they have set about dismantling democracy.

“They’ve taken back control for themselves and they aim to make this advantage permanent.

“They’re bringing in a kind of Trumpian voter suppression, they are shutting down challenges in parliament and they seek to end judicial review for government matters.

“With the Policing Bill and Snoopers Charter they aim to stifle all forms of dissent.

“Our fragile democracy based on the ‘good chaps’ principle is being smashed by a small cabal of crooks who have taken over the Tory party.”