The Brexit Party launched its election campaign in London on Friday. 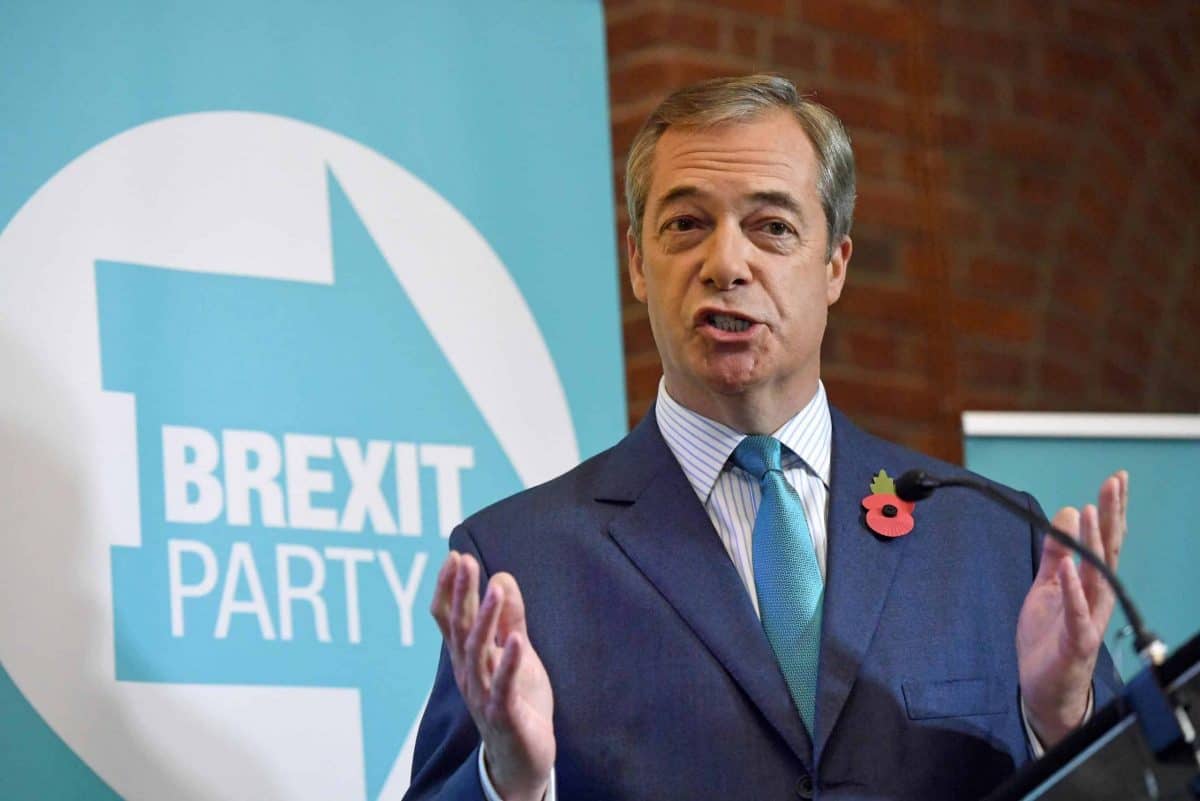 Nigel Farage has thrown down a General Election gauntlet to Boris Johnson, calling on him to ditch his Brexit deal and form a “Leave alliance”.

The Brexit Party leader said he will field a candidate in every seat in Britain if the Prime Minister does not drop his EU Withdrawal Agreement and get together in what he said could be a “non-aggression pact”.

Launching the party’s General Election campaign in Westminster, Mr Farage said the PM’s deal did not represent Brexit and described his “very big, generous offer” as a “one-off opportunity” that would secure Brexit and win the election with a “big stonking majority”.

Mr Farage said if the Tories did not agree to an alliance and abandoning the deal he would make sure every household in the country was made aware it was a “sell out” of Brexit.

Addressing a hall packed with journalists, Mr Farage said if Mr Johnson did not agree to his terms his party “will contest every single seat in England, Scotland and Wales”, adding: “I say to Boris Johnson – drop the deal.”

Mr Farage said: “Of course, I’m open and flexible to local exceptions and already we are in communication with a number of MPs who are prepared to renounce the Withdrawal Agreement, to renounce the deal, and they themselves to stand on a ticket of a genuine free trade agreement or leave on WTO terms.

“And of course in those cases where MPs say this, we will view them as our friends and not as our enemies.

“But that is not the real deal. The real deal is a Leave alliance that wins a big majority in Parliament.

“The real deal is a Leave alliance that delivers a genuine Brexit.”

It is thought Mr Farage’s party may try to persuade staunch Tory Brexiteers to do a U-turn on their support for Mr Johnson’s Withdrawal Agreement and his party could then leave those Tory candidates to run in their constituency without opposition from the Brexit Party.

“In particular, old Labour seats that have never ever been Conservative, never ever will be Conservative, where there were Leave majorities in the referendum but they’re represented by Remain MPs.

“And they, for us, are our number one target.”

When asked if he would consider no longer supporting the Withdrawal Agreement to avoid a challenge from the Brexit Party, Eurosceptic Mark Francois told PA: “No. I voted for Boris’s deal and I’m sticking with it because it takes us out of the EU.”

Steve Baker, chairman of the European Research Group of Tory Brexiteers, said he was “at a loss” to know what Mr Farage wants to achieve, adding: “I am no more willing to be bullied by Nigel Farage than anyone else into acting against my best understanding of the national interest.”

Mr Baker told PA: “The reason every Conservative Eurosceptic MP backed the deal is that it can deliver a Brexit worth having.

“But Boris will only negotiate a great future for the UK if he has a good majority of resolute Conservative MPs. Nigel now risks that and our future.

“It is completely inconceivable that the Conservative Party would now go for no-deal and a pact.

“Is Nigel a statesman or a campaigner? We are about to find out.”

Mr Farage said Mr Johnson’s deal is “simply not Brexit”, adding: “So what I’m saying is – it’s a General Election, it’s a chance to press the reset button, drop the deal and let’s move forward and let’s form some kind of Brexit alliance and win the election.”

US President Donald Trump appeared to call for an electoral pact between Mr Farage and Mr Johnson in a call to LBC.

He said the pair could become an “unstoppable force”, as well as saying it would be difficult to trade with the UK under Mr Johnson’s Brexit deal.

Mr Farage, asked about how pleased he was that Mr Trump criticised the PM’s deal, said: “Well I’d known for some time that members of the American administration were very, very worried about what had been signed up to.

“And Trump made it clear that basically if we go along with the terms of this there’ll never be a trade deal with the USA.”

A Number 10 spokesman said the PM had not spoken to the US president about his Brexit deal, which was “agreed after they were last in touch”.

“The PM’s deal takes back control of our money, laws and border and allows us to do trade deals with any country we chose – including the US,” he said.

Conservative Party chairman James Cleverly said a vote for Mr Farage “risks letting Jeremy Corbyn into Downing Street via the back door – and the country spending 2020 having two referendums on Brexit and Scottish independence”.