by April Curtin
in Politics 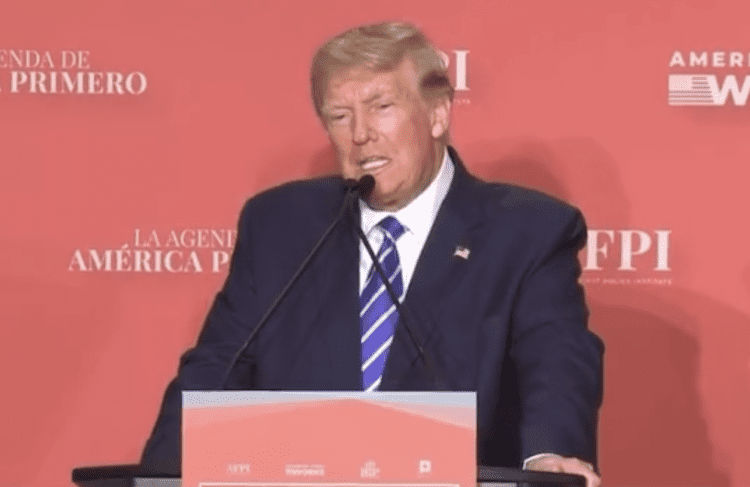 Donald Trump made multiple claims at the Hispanic Leadership Conference in Miami on Wednesday (Image: RSBN)

One-time president Donald Trump has claimed a pollster told him he would beat George Washington an Abraham Lincoln “by 40 per cent” if they teamed up as President and Vice President.

The former US president, 76, made the comments in a speech at the Hispanic Leadership Conference in Miami, Florida on Wednesday.

Trump claimed that a “very famous pollster”, John McLaughlin, told him just before the pandemic that “if George Washington and Abraham Lincoln came alive from the dead and formed a president-vice president team, you would beat them by 40 per cent”.

The National Archive and Records Administration (NARA) has previously debunked these claims, which Trump has made before, stating that it “assumed exclusive legal and physical custody of Obama Presidential records” when he left office in 2017.

Meanwhile, Trump himself condemned federal agencies who have been looking into his handling of sensitive government records, while demanding to know whether the handing of documents by the George Bush and Bill Clinton administrations had been investigated.

He also took a dig at Hilary Clinton, stating that she “should have perhaps been charged”, but not elaborating on what he meant.

Speaking about the FBI’s search of his Mar-a-Lago estate in August, the ex-president said: “The document hoax is just that. It’s a hoax and a charade and I am being unjustly, illegally, and unconstitutionally being targeted. It is a violation of the 4th amendment, you know.”

Related link – WATCH: President Joe Biden caught on mic saying ‘no one f**ks with a Biden’