In a story written about Kwasi Kwarteng, the Daily Mirror made the mother of all mistakes - by publishing an image of someone else. 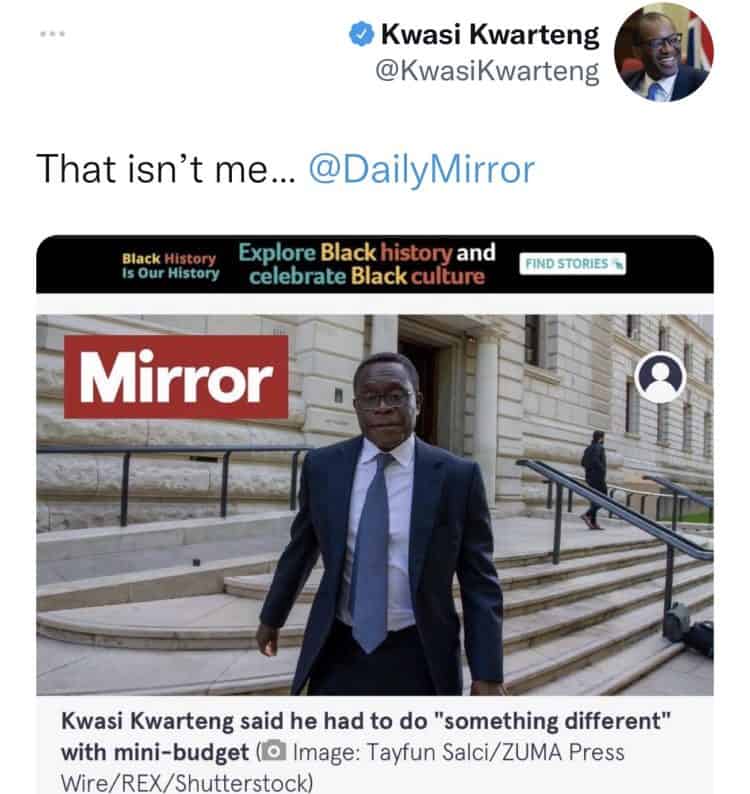 The Daily Mirror has been left red-faced on Saturday, after it printed the wrong image in a story about Chancellor Kwasi Kwarteng. In the banner photo, someone completely different appears – but it is captioned as if it were the senior Conservative official.

The embarrassing episode has forced an apology from the red-top publisher, who have now vowed to ‘redouble their efforts’ to work against racism and discrimination. A spokesperson for the media outlet has lamented the ‘terrible error’:

“This morning a picture in a story about Kwasi Kwarteng was wrongly captioned on the Mirror website. This was a terrible error and we apologise to Mr Kwarteng and all our readers.”

“The Mirror has a long history of working against racism and we will redouble our efforts on this.” | Daily Mirror

Who was Kwasi Kwarteng mistaken for?

The Mirror has drawn a lot of negative attention from their slip-up, given that October marks the start of Black History Month. There could have barely been a worst start to the commemorations than this, however.

The image featured actually depicts Mr. Bernard Mensah, the Bank of America President. He is highly regarded in economic circles, making the confusion with Kwarteng all the more difficult to understand.

The story itself concerns the Chancellor’s controversial mini-budget, which sent the markets into freefall over the past week or so. The plans were largely beneficial for the richest Britons, and didn’t do much to help the working classes. It ended up sending The Pound into freefall.

Chancellor sticks the boot in after ‘Mirror image’ scandal

However, Kwarteng has argued that he needed to do ‘something different’ in order to stimulate growth in the UK. The Pound has since recovered from its midweek lows, but that’s largely down to intervention from the Bank of Engalnd.

Either way, The Mirror isn’t being allowed to live this one down. Even Kwasi Kwarteng himself decided to get involved, chastising the press institution for their glaring mistake. The Chancellor posted this three-word response to the fiasco: