Campaigners will take to the streets today to promote the genuine offer that they hope the PM will take up. 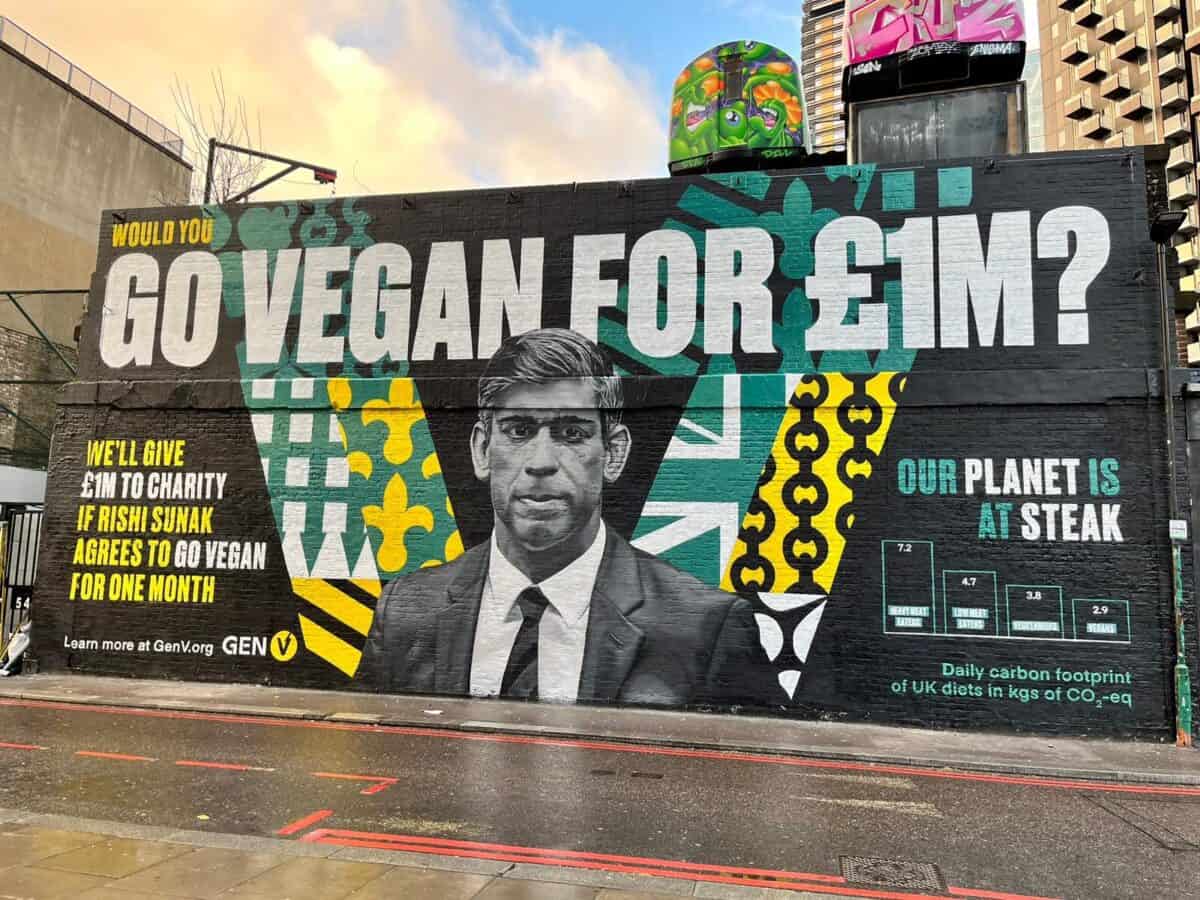 Vegan campaigners will drive tractors around Parliament Square and past Downing Street today in a bid to persuade the prime minister to accept their £1 million charity donation in return for him being vegan for one month.

Attached to the tractors are giant inflatables of a globe, a million-pound coin, a cow, and Rishi Sunak himself.

Simultaneously, there will be a prominent banner drop, a carnival-style procession to Downing Street, and the distribution of hundreds of free vegan meals – all coordinated by international NGO Generation Vegan (GenV). Over the weekend, a 25-feet high mural was painted in Shoreditch.

The event comes ten days after Rishi Sunak was offered £1 million for a charity of his choice if he tries vegan for one month.

To date, the PM has made no response.

The same offer was previously made to Pope Francis, who gave the campaigners his blessing and later encouraged young people to reduce their consumption of meat.

A subsequent offer was made to former president Donald Trump who famously said he would not accept it as he said it could mess with his brain. “And if I lose even one brain cell, “he said, “we’re f***ed.”

GenV’s high-profile campaigns seek to highlight the impact of animal agriculture on the climate, pollution, deforestation, biodiversity loss, pandemic potential, antibiotic-resistance, public health, and the lives of billions of animals – both farmed and wild.

Says GenV’s CEO Naomi Hallum: “Prime minister Sunak has pledged to protect the future of our planet and has spoken more than once about the importance of showing compassion.

“Now, we ask him to follow his words with actions, and adopt a plant-based diet for at least one month.

“Our hope is that he will accept our genuine million-pound offer and we have come to London to urge him in person: take the challenge, donate the money, and show the world how compassionate, healthy, environmentally friendly, and delicious a plant-based diet can be.”

Since the start of the year, when the offer was first put to the prime minister, Generation Vegan has put up more than 5,000 posters around London, including a Westminster underground station takeover.

The group has also published an open letter to Sunak in four major newspapers. That letter states:

Animal agriculture accounts for up to 85 per cent of farmland yet provides only 32 per cent of our calories and less than half of our protein.

To feed the same number of people on a plant-based diet would require just one-sixth of the land, leaving 14.5 million hectares available for nature restoration, rewilding, and carbon sequestration.

Animal agriculture is responsible for at least 16.5 per cent of all man-made GHG emissions.

If we all ate plant-based, our food-related GHG emissions would drop by 70 per cent.

Adopting a plant-based diet is associated with decreased risk of cardiovascular disease mortality and incidence.

A new study found that plant-based diets reduced the risk of postmenopausal breast cancer by 18 per cent, prostate cancer by 31 per cent, colorectal cancer in men by 43 per cent, and of developing any type of cancer by 14 per cent.

In a recent survey, 64 per cent of farmers said they would consider transitioning out of animal agriculture entirely provided financial support was in place.