The feisty interview has been making the rounds on social media this morning. 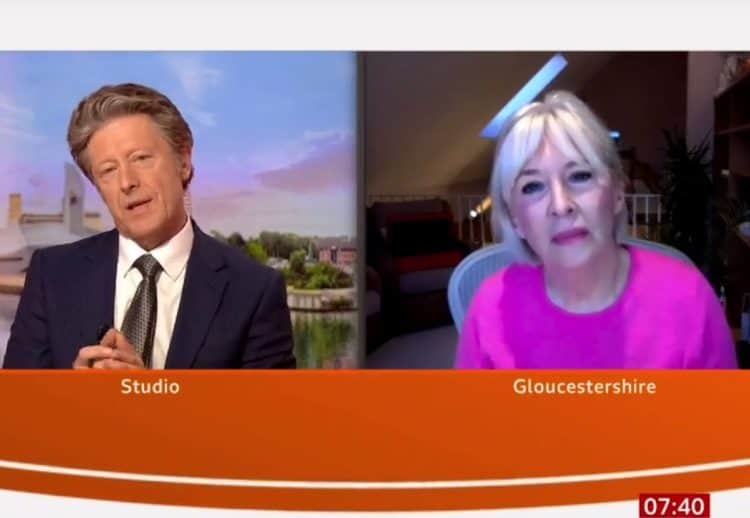 Nadine Dorries, the culture secretary and one of the last remaining supporters of Boris Johnson, didn’t disappoint during the media rounds this morning.

Following a series of car crash interviews last week the MP for Mid Bedfordshire appeared on BBC Breakfast for an interview with Charlie Stayt, which couldn’t have got off to a more surreal start.

Asked whether she has spoken to the PM recently, Dorries seemed puzzled by the question and initially refused to answer before saying:

She then insisted that the prime minister’s mood was good and that nothing had changed, before backtracking and saying that a “huge amount of change is underway at present” in response to Stayt’s “open-ended” question.

Ambushed by a beer

The prime minister has come under fresh scrutiny today after it emerged that police have been handed a photograph of him drinking a beer at a lockdown party in June 2020.

Johnson is pictured standing next to chancellor Rishi Sunak, who is holding a coke, in No10’s Cabinet Room.

Sources said he appeared to be raising his can of Estrella beer towards the camera in a toast.

The bombshell image was thought to have been taken by Mr Johnson’s official taxpayer-funded photographer who was documenting the event.

It is thought to be among 300 pictures submitted to the Metropolitan Police as evidence of rule-busting gatherings by senior civil servant Sue Gray.

Barrister Adam Wagner, an expert in Covid laws, said: “The legal question for the Prime Minister is whether he participated in the gathering.

“The fact that he was photographed holding a beer strongly suggest he did and therefore committed a criminal offence of the regulations”.

The picture shows the two senior politicians surrounded by No 10 aides in the Cabinet Room but no birthday cake, sources said.

Mrs Johnson led up top 30 staff in a chorus of happy birthday before tucking into picnic food from M&S, it has been claimed.

The Chancellor is understood to have attended the event as he turned up for a Covid meeting, but had not been invited in advance.

Another Tory MP has called on Boris Johnson to resign following the reports.

Mr Gibb, who is reported to have submitted a no-confidence letter to Sir Graham Brady, brings the number of Tory MPs who have now publicly called for Mr Johnson to resign to 15.

Privately, the number is expected to be higher.

Writing in The Telegraph, the MP for Bognor Regis and Littlehampton said that the Conservative Party must face the “hard truths”, and added: “To restore trust, we need to change the Prime Minister.”