The president will have face-to-face talks with Boris Johnson on Thursday in Cornwall. 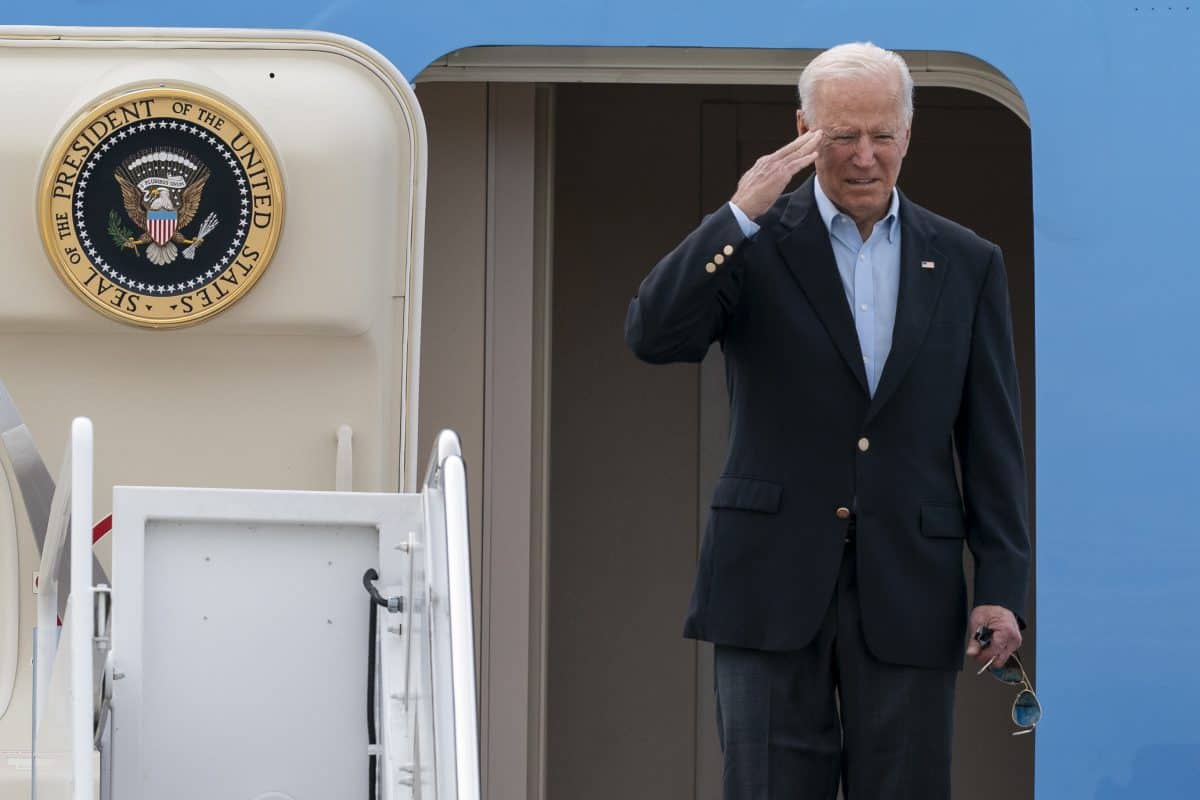 President Joe Biden salutes as he boards Air Force One upon departure, Wednesday, June 9, 2021, at Andrews Air Force Base, Md. Biden is embarking on the first overseas trip of his term, and is eager to reassert the United States on the world stage, steadying European allies deeply shaken by his predecessor and pushing democracy as the only bulwark to the rising forces of authoritarianism. (AP Photo/Alex Brandon)

Joe Biden will warn Boris Johnson and the European Union not to “imperil” the Northern Ireland peace process, the US president’s national security adviser said, as they struggle to resolve a trade row.

Jake Sullivan warned that Mr Biden harbours “very deep” concerns on the issue provoked by Brexit, before he on Wednesday left for the UK, where he will attend the G7 Summit.

Aboard Air Force One, Donald Trump’s successor headed from Joint Base Andrews near Washington towards RAF Mildenhall in Suffolk, ahead of a meeting with the Prime Minister on Thursday.

Mr Sullivan said the president believes the post-Brexit Northern Ireland Protocol is “critical” to ensuring that the Good Friday Agreement is protected, as Britain and the EU try to resolve the issue of checks in the Irish Sea.

The adviser told the BBC that both sides must continue with negotiations, adding: “But whatever way they find to proceed must, at its core, fundamentally protect the gains of the Good Friday Agreement and not imperil that.

“And that is the message that President Biden will send when he is in Cornwall.”

In his first overseas trip as US president, Mr Biden and his wife Jill will kick off the eight-day trip to Europe by meeting US personnel stationed at the base in Suffolk.

The president will then have face-to-face talks with the Prime Minister on Thursday in Cornwall, with the summit beginning in Carbis Bay the following day.

Having succeeded Mr Trump after his single fractious term in the White House, Mr Biden said the trip is about “realising America’s renewed commitment to our allies and partners” in an article for the Washington Post.

Mr Biden also said he would meet the Prime Minister to “affirm the special relationship between our nations”.

However, this week it emerged Mr Johnson is not a fan of the expression, after an American magazine reported he told aides he does not like the seemingly “needy and weak” term.

Downing Street said he “prefers not to use the phrase” and is instead intent on fostering a “close relationship” with Washington.

Part of that, Mr Johnson hopes, is a trade deal with the US. However, the national security adviser’s remarks were the latest in a string of warnings about Brexit’s impact on Northern Ireland.

The Prime Minister plans to use the summit of leading economies to urge the members – also including Canada, Japan, France, Germany and Italy – to “defeat” Covid-19 by helping to vaccinate the world by the end of next year.

After the summit ends, the president and first lady will meet the Queen at Windsor Castle. Mr Biden will then depart for Brussels and later Geneva in Switzerland.