"Cards on the table. I think the fact that we haven't heard from them today is an utter dereliction of duty." 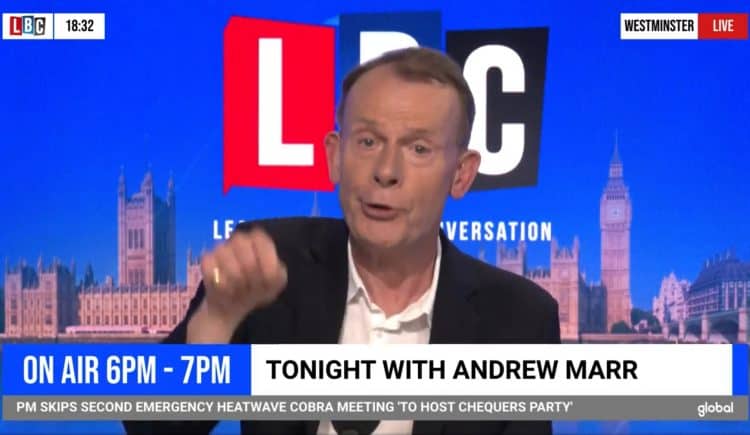 Andrew Marr has dubbed Liz Truss and Kwasi Kwarteng “cowardly and shameful” after they went into hiding on the back of their so-called ‘mini-budget’.

With the markets in turmoil and the Bank of England having to step in to prevent mass insolvencies of pension funds, the PM has only just come out to defend her policies, appearing on local radio stations across the country.

Summarising what has been an eventful start to her premiership, Marr’s blistering monologue tore into Truss and Kwarteng for their “utter dereliction of duty”.

“Today the Bank of England began to print money to prop up the British government, warning that if the markets went on like this there’d be a material risk to Britain’s financial stability.

“With the pound down to $1.05; interest rates on the way up; pension funds on the edge, a stinging rebuke from the IMF, mortgage deals being suspended; predictions of dramatic falls in house prices, this is as close to a perfect economic storm as we’ve seen since the banking crisis of 2008.

“One senior Conservative MP Simon Hoare argue that this was a crisis created inside Government, adding “this inept madness cannot go on.”

“Some say that if the Chancellor won’t U-turn on his tax cuts – and the Treasury said today he won’t – he must go.

“Opposition leaders Keir Starmer and Ed Davey are demanding an emergency recall of Parliament. The questions go on: will the Tories even press ahead with their conference at the end of this week?

“Plenty of senior Conservatives are boycotting what was meant to be a triumphal progress for a new leader; but now the chance of a political bloodbath in Birmingham is real.

“Among many others, Rishi Sunak isn’t going. He’ll be walking in Yorkshire. One of his allies said he wanted to give Liz Truss all the space she needs to own the moment. I think this is what young people call gaslighting.

“In truth, there is very little the Conservative Party can now do. If Truss and Kwarteng reversed their unfunded tax cuts now they’d be discredited – politically over, finished.

“But getting rid of Truss is I think impossible. It could take many months, at the very time when the markets are already jittery about the stability of this country – and that, party politics aside, would be a further national disaster.

“As one former cabinet minister put it to me, there just isn’t time, and anyway it would mean three different Tory leaders in three years: so the public would demand, quite rightly, a general election.

“The only thing the Prime Minister and Chancellor could possibly do to of this right now is to get out there right now, and start to make the argument for their policies. Instead they are sitting tight, crossing their fingers and they’re hoping it will all blow over.

“Cards on the table. I think the fact that we haven’t heard from them today is an utter dereliction of duty.

“I wanted to give the new team a chance, to lean over backwards to be fair. But this is cowardly and shameful.”