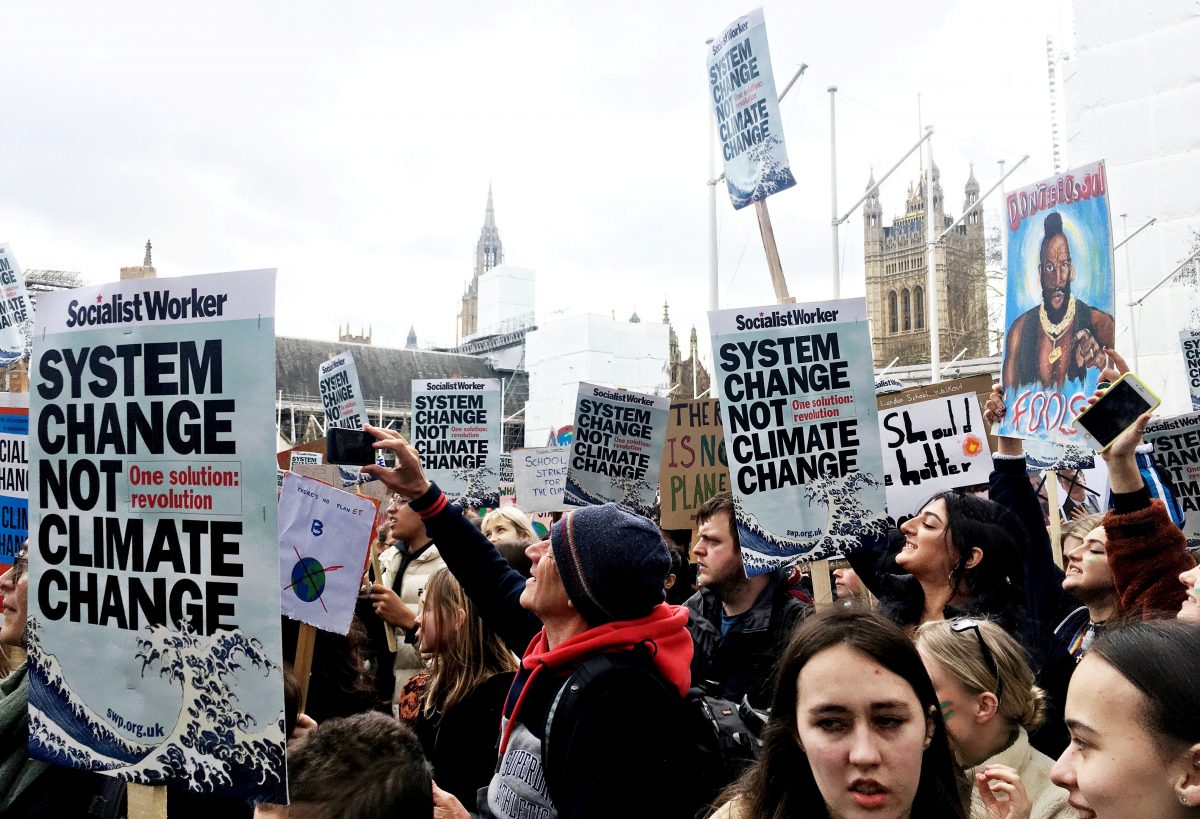 Storm Ciara recently battered much of Europe, including the UK, causing power cuts, tidal surges, travel disruptions, and even death. Costs have not yet been calculated but will include clean up, rescue, repair, replacement, insurance payouts, and premium increases. Climate-driven variations now cause jet stream-powered winds to “sweep across the Northern Hemisphere in massive waves.” No sooner had Ciara passed than Storm Dennis arrived.

With a Prime Minister and government part-funded by climate change deniers, now is a good time to ask how much global warming hurts the economy. The numbers are coming in, so let’s examine 2019: one of the wettest and warmest on record.

The Met Office says that climate change means drier summers and “heavier bursts.” Floods affected the UK in seven of the 12 months of 2019. In February and March, storms Erik, Freya and Gareth flooded parts of England and Wales and brought snow to Scotland. The most severe downpours occurred in late-July when torrential rain affected parts of Manchester, the Pennines, and North Yorkshire.

Fifteen-hundred people were evacuated from Whaley Bridge, Derbyshire, over fears that the Toddbrook Dam could break and submerge the town. Estimated repairs could take years and the costs are predicted to run into the “hundreds of millions.” Clean up and rescue operations cost Derbyshire County Council £700,000. The Telegraph claims that the government will make available £5m in compensation funds. Businesses were offered £100,000 and under the Ministry for Housing’s Bellwin scheme, the High Peak Borough Council offered an additional £150,000.

Small-and-medium-size businesses like Goyt Wines and Adeva hairdressing lost thousands of pounds due to the evacuation, but because no flood damage occurred they cannot claim compensation from their insurance companies. Others, like the Phoenix Takeaway, did not claim in case of premium increases. Via the National Environment Research Council, the government awarded universities and the Environment Agency £1.2m to study prevention through blocking Peak District gullies and planting water-absorbent moss and trees.

Mohammad Khan of PwC estimates that the floods in the North alone could cost insurance companies £80m, hence the growing burden for customers: Between 2016 and 2019, home insurance premiums increased by 25 percent due to increasingly severe weather. In just the last quarter of 2019, they rose by 2.7 percent.

Already nearly half a million Britons are affected by sea level-linked soil erosion. As the Arctic melts and sea levels rise, battered coasts, drainage overflows and road, property and field flooding jeopardise the 11.5 million people who live near estuaries. Sea level rises disproportionately affect coastal towns, cities, and villages, and those at or below sea level. Using a low-CO2 emissions estimate, the Met Office predicts that regional levels could rise by around half a metre during the next 80 years.

Hundreds of millions of pounds are being spent in preparation.

The Tory-Liberal coalition government’s (2010-15) Growth and Infrastructure Act allowed greedy developers to build in high-risk areas and evade council and community oversight. Since 2013, 30,500 houses in England and Wales have been built in high flood risk areas (Scotland’s devolved authority is better regulated).

In that year, the highest tide ever recorded forced 9,000 people to evacuate their Great Yarmouth coastal homes. In May 2019, Norfolk County Council announced a £40.3m upgrade package for River Yare Tidal Defences, which protect 4,500 homes and business. The upgrade will include 4kms of wall and cost central government £32m. In September, the government announced an additional £62m to boost defences in 13 (mostly northern) regions: from Kendal (Cumbria) on the northwest coast to the inland Sowerby Bridge (Yorkshire), where the Calder River is prone to flooding.

The UK Office of Science and Technology notes that “livestock are vulnerable to the migration of diseases with climate change” and that “the 2018 UK heatwave led to low yields of most UK crops.” Crops failed again in 2019. Like the shifting of insurance costs to consumers, farmers, suppliers, and retailers raised food prices to compensate. Extreme weather in 2018 increased 2019’s food prices (from 1.6% to 2.5%) to the highest levels since 2013.

In warmer years, typical European economies lose 2 percent of their annual output. Normally working to full productive capacity in three out of the five working days, office workers lose half a day in productivity in high temperatures. During the summer heatwave 2019, some businesses closed while others instructed staff to work from home. Underfunded NHS services were overwhelmed, as accident and emergency attendances increased by 4 percent compared to July 2018’s heatwave.

Road surfaces melted in the 2019 summer heat, forcing closure of the A11 in Norfolk. Numbers for 2019 are not in yet, but melting roads in the heatwave of 2006 cost £3.6m to repair. The UK’s rail infrastructure also buckled, as overhead cables fried and lines cracked. The estimated cost of climate-related delays and cancellations to the overall travel and commute economy is £15m per annum.

So, what’s our government doing to reduce emissions?

In 2016, Tory PM Theresa May scrapped the Department of Energy and Climate Change. A few years later, she scratched around for a “legacy” project and announced plans to strengthen the UK’s 2050 climate emissions target. Threatening to take more money from chronically underfunded hospitals, police, and schools, Chancellor Philip Hammond urged May not to pursue the policy because, he claimed, doing so would cost £1tr and make the UK “economically uncompetitive.”

In 2007-08, Sir Michael Hintze donated to current PM Boris Johnson’s mayoral campaign. Hintze is a hedge fund manager, Brexiteer, and financial backer of the climate denial think tank, the Global Warming Policy Foundation (GWPF). As Mayor of London, Johnson scrapped taxes for gas-guzzling cars before pedalling climate scepticism (the subtler form of denial), writing: “The Sun is incomparably vaster and more powerful than any work of man.” (For the science of solar vs. greenhouse warming, see NASA.) In December 2015 just after the international UN Climate Change Conference, Johnson wrote that the mild winter had “nothing to do with global warming.”

During the general election campaign (Nov.-Dec. 2019) that ended with a huge Tory majority, 94 percent of the big money from groups and individuals linked to climate change denial went to the Tories. Johnson’s campaign received money indirectly from businessman Terence Mordaunt, then-director of the GWPF. After Johnson’s electoral victory, GWPF director Benny Peiser congratulated Johnson and hoped that Britain’s climate policy would “no longer be driven by London’s metropolitan eco-bubble.”

With a weakened Labour Party not likely to return to power for at least five years, opposition to Johnson’s deregulatory agenda will be hard, but inaction will see worsening weather crises.