To read some of the coverage of the limited air and missile strikes against Syrian military targets on Friday April 13 2018 one might have deduced that this was Iraq War II the sequel. On the one hand May and Trump were busy congratulating themselves on their “tough” military response to the Syrian regime’s […] 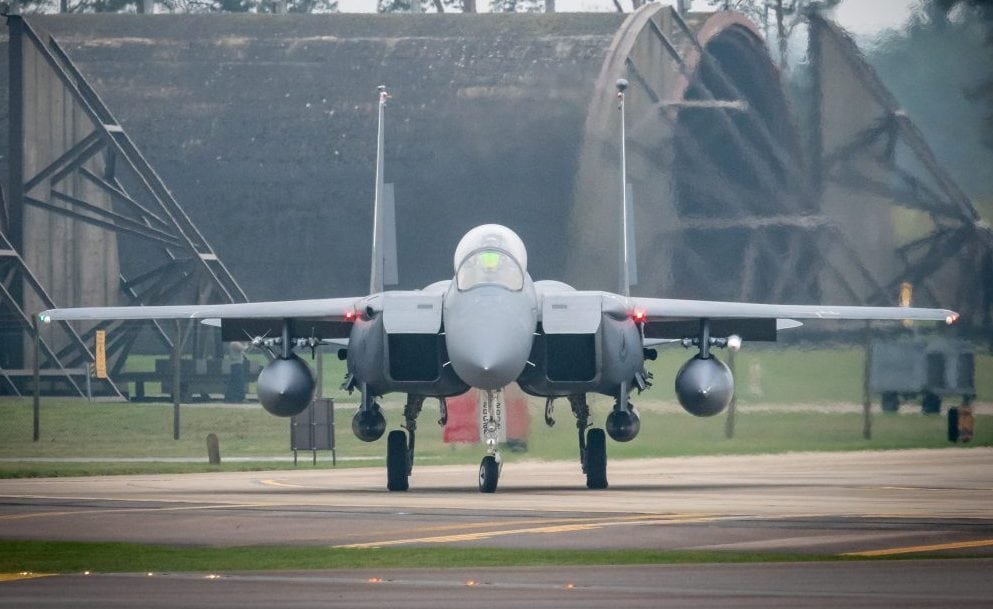 To read some of the coverage of the limited air and missile strikes against Syrian military targets on Friday April 13 2018 one might have deduced that this was Iraq War II the sequel.

On the one hand May and Trump were busy congratulating themselves on their “tough” military response to the Syrian regime’s murderous use of chemical weapons against civilian targets in Douma.

On the other, elements of a Stalinized Left who are reluctant to recognise the threat posed by Putin, and who have secretly supported the Assad regime’s atrocities for a while, seized upon talk of a “war” to openly defend the dictator and the Russian leader supporting him as victims of Imperialist aggression.

What nobody seems actually to be asking, however, is why this highly limited action, which will not lead to a significant military escalation or any real change in Damascus.

The last time Trump launched a missile strike against a Syrian airbase was roughly a year ago, in response to a similar chemical weapons attack in Khan Shaykhum in Idlib.  Here, the Assad regime had been emboldened as Trump had made it plain that the US was no longer interested in regime change in Damascus.

After the Assad regime used chemical weapons the US had to be seen to do something.  It also provided Trump with an opportunity to seemingly distance himself from Putin, which a surprisingly large amount of the media bought into at face value.  However, it was all smoke and mirrors and the same Syrian airbase was up and running again in 24 hours.

The Assad regime did stop using chemical weapons, for a while, but the carnage waged by barrel bombs, particularly in Aleppo, continued, as did the targeting of hospitals and the so called “kill zone” strategy refined by Putin in his own genocide against the Chechens in Grozny.

On Saturday morning, during a 70 minute offensive, 120 missiles were fired at three chemical weapons facilities near Damascus and Homs.

The attacks began at 4 am Syrian time on April 13 which was 2 am GMT.

But French Defence Minister Florence Parley has already revealed that the Kremlin had prior warning of the attacks in which Russian targets were studiously avoided.  This includes the Russian mercenaries routinely ferried into Syria from Rostov-on-Don.

Sadly much of the Left, have misinterpreted the situation in Syria and are now casting Assad and Putin as victims of Western aggression.

This replicates the situation in Bosnia, in the early 1990s, where elements of the Left offered cover to Milosevic by blaming the genocide in Bosnia on EU recognition of Croat independence.  Instead of demanding a lifting of the UN arms embargo against the Bosnian BiH forces much of the Left looked for reasons to support Milosevic and his Serbian fascists.

Later, the Left and even the Labour leadership opposed military action that was being demanded by democratic forces on the ground during Syria’s Arab Spring, during early massacres by Assad’s forces.

By stupidly confusing the situation in Syria with Iraq, where no forces on the ground were advocating western military intervention, they enabled Putin to take the initiative and save the Assad regime from being overthrown in a civil war that escalated over the next seven years.

Indeed, those who opposed military intervention in Syria are as guilty as Tony Blair, and the architects of the illegal Iraq War, in the creation of ISIS, almost in equal measure.

When Putin talks of consequences for the non-event that is cosmetic and highly limited western military action in Syria this is for domestic consumption, although it will be interesting to see how and if Trump continues to justify hosting Putin at the White House later this year.

Much more disturbing is the evidence that, after the US attacks, the Kremlin has further consolidated its agreement with the Erdogan regime in Turkey, itself a hitherto supporter of ISIS in Syria (his son was smuggling oil on their behalf), to partition the country into spheres of influence, giving Turkish forces a free hand to massacre the Kurds east of the Euphrates.

Already, Trump’s betrayal of the Kurds, who played a leading role in the defeat of ISIS, proves that the recent military action in Syria counts for nothing.