The Ukraine crisis shows how important it is to learn the lessons of the Kindertransport, which saved thousands of Jewish children from the Holocaust. 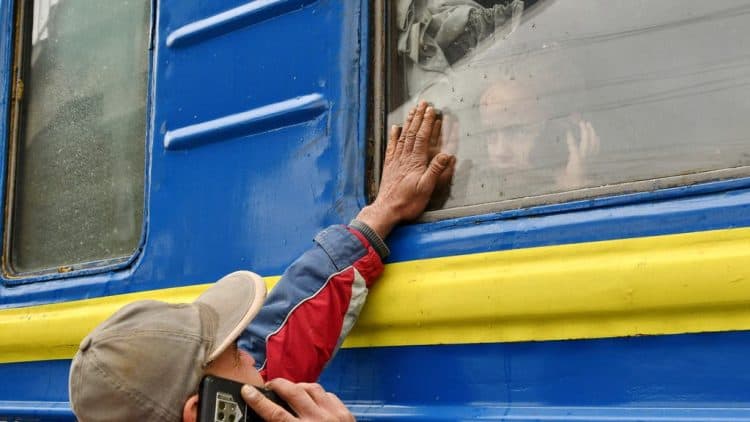 A researcher who revealed the heroic efforts of ordinary British people in saving Jewish children from the Nazis has spoken out about why the government should trust citizens in a humanitarian emergency like Russia’s invasion of Ukraine – and waive visas.

Mike Levy spent years investigating how the famous Kindertransport was organised by mostly non-Jewish families in the UK between 1938 and 1940, rescuing 10,000 children.

The 72-year-old, who was born in Leeds but has roots in Lithuania through his grandparents, who came from Tsarist Russia, said his Jewish community has this week launched an initiative called ‘Ukrainetransport’. Rabbi Jonathan Romain from Maidenhead is hoping to use the Kindertransport model to encourage Brits to take Ukrainian children into their homes.

But the success of the project would depend on the British government moving towards a sponsorship scheme that would rely on community effort rather than state control, according to Levy.

Levy said there are lessons to be learned from Kindertransport, the largest rescue mission of the entire Holocaust era, during which the UK government waived visa regulations for children up to the age of 17.

But they were not allowed to come with their family or parents and the government “did nothing else” to help, he said – so unaccompanied children were saved by thousands of volunteers who financed, supported and ran the scheme across the UK.

Levy, who wrote a book on the topic, told The London Economic: “The government stepped back and said ‘look, refugees are not our business. You as volunteers have to do all the work. All we will do is make sure they don’t have to get a passport and a visa’. So it was a huge voluntary effort.

“There was no limit on child refugees but it was different for adults, who had to fulfil much tougher criteria. They had to have a sponsor and a job to be able to come to Britain, and there were very limited types of jobs they were allowed to come and do, like domestic servants or farm workers.”

When the war came, the children were quickly sent away from London, across the whole of the UK.

“Almost every town and village in Britain would have had a Kindertransport child somewhere nearby”, Levy explained. “Strangers had to look after them. Volunteer committees were set up around the country to house them, feed them, get them to schools, provide healthcare as it was before the NHS was invented.”

He estimates there were about 200 local communities from the north of Scotland and Northern Ireland all the way to Cornwall, Wales and the south of England, which were formed to take in children from Germany, Austria and Czechoslovakia.

“There are some lovely stories about children who were taken into foster families by complete strangers and became lifelong members of the family because their own families have been murdered,” he said.

He mentions a number of striking cases of rescuers going to extraordinary lengths to get children out of the Nazis’ way.

One example was Rabbi Solomon Schonfeld, an English man who lived in London and organised his own, one-man Kindertransport which brought hundreds of children to Britain – many from Vienna, Austria.

“He was an Orthodox Rabbi and was very much welcomed by the Home Office because he had perfect English, went to public school and played cricket, the epitome of that perfect English gentleman,” Levy said.

So Schonfeld was very successful in convincing the Home Office at the time that there was a shortage of people who could make prayer shawls.

There wasn’t. But Levy said it was a “funny and sad trick” to get visas for parents of children too. “They gave him 200 visas which meant 200 adults saved from Nazi murder, on top of the 669 children he saved.”

Some 10,000 children arrived in Britain within eight months, with the first Kindertransport seeing the arrival of around 1,500 children in just two weeks.

But he thinks this was only possible because of volunteers being allowed by the government to use their initiative, without too much paperwork required.

This has so far not been the case during Russia’s invasion of Ukraine. The Home Office is facing a significant backlash because of its refusal to waive visa requirements and simplify the process through which Ukrainians fleeing the brutal conflict can seek asylum in Britain.

Levy thinks the government is “trying to treat refugees as migrants” and looking at the humanitarian crisis from a “bureaucratic” point of view.

He said: “One conclusion one could make is if the government today trusted well-organised, local volunteers to do the right thing for the children, to find them homes, to find them schooling and to help them as parents would, then many more would come in much more quickly.

“I think the voluntary spirit is there, I think there is no difference between people’s reaction to helping children in danger then, as there is now.

“I think there are potentially thousands and thousands of volunteers who would open their homes and schools whenever, particularly to child refugees or those in the most danger. So it is a question of the state control that we have that we didn’t have then, which requires more hoops to go through.

“In an emergency, maybe one has to rely more on the voluntary sector.”