Ms Dorries – who froze the BBC licence fee in January – likened the broadcaster to a “polar bear on a shrinking ice cap”. 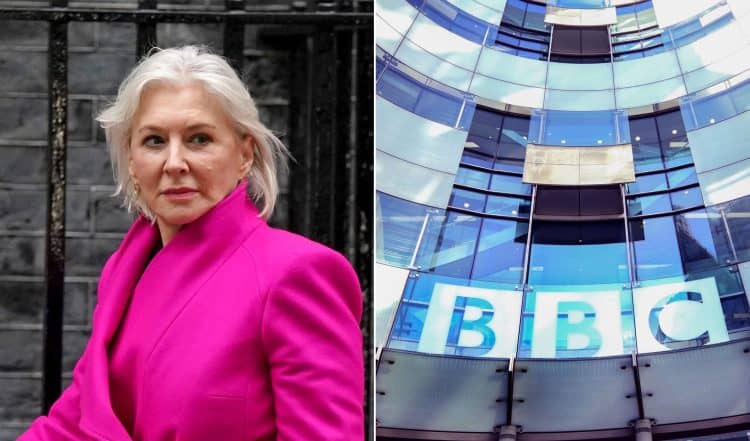 Culture Secretary Nadine Dorries has said the BBC has a problem with “groupthink” and needs saving from itself.

But after numerous gaffs who will save Nadine?

Ms Dorries – who froze the BBC licence fee in January – likened the broadcaster to a “polar bear on a shrinking ice cap”.

Speaking to the Sunday Times, she said: “There is a problem with groupthink within the BBC, and I don’t think those people think they are left or they are right.

“I think they just believe they are absolutely right about everything. And they have a world view and a view of the UK, which is, I think, sometimes very wrong.

“Our responsibility is to save the BBC from itself, because it is that polar bear on a shrinking ice cap.”

She said she thought the BBC’s funding model would not exist “into the future” regardless of her actions as Secretary because “it will hit the buffers as more people refuse to pay the licence fee”.

Ms Dorries also commented on her loyalty to the Prime Minister amid tensions within the Tory party in the wake of partygate.

She said: “I’m old-school politics. The prime minister gave me my job as a secretary of state, and for that I owe him my absolute undying loyalty.”

In response Brendan May tweeted: “The Sunday Times magazine is trailing their fascinating profile of Nadine Dorries by saying she’s one of our most interesting politicians, far more so than you’d know from Twitter, with tantalising snippets which are all, without exception, things she constantly says on Twitter.”

Someone also mentioned the piece comes at the same time she has allowed the Times and Sunday Times to merge.

Only recently Nadine Dorries was been mocked for wrongly claiming that Tony Blair and Gordon Brown had it easier than Boris Johnson because they ran the country at a time before rolling news and social media, basically claiming the internet was only a decade old.

She also had another awkward exchange during a morning media round, appearing reluctant to speak about her most recent contact with Boris Johnson.

The Cabinet minister challenged BBC Breakfast presenter Charlie Stayt as to why he was asking her if she had spoken to the Prime Minister in the past 24 hours.

There were also three car crash interviews in succession, where many people felt she was a bit unsteady, to put it mildly.

How about when she was reported over tweet about councillor’s manhood?

The litany of embarrassing moments for Dorries is seemingly endless.

She might be trying to save the BCC from itself but someone needs to do the same to her.