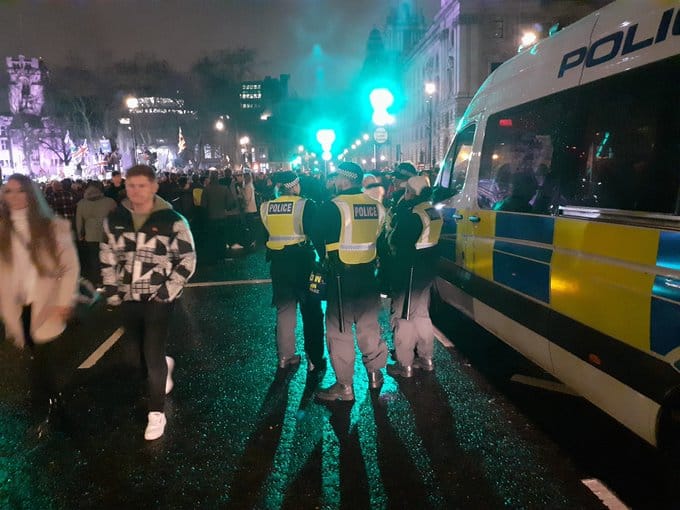 It didn’t start well: I’d just paid my respects at the Keith Palmer memorial outside Parliament and couldn’t help noticing a bespectacled male standing just yards away, draped in an EU flag. He was engaged in a civilised conversation when he was approached by an individual who could have stepped straight out of a scene from Green Street.

“This is our f*cling night you c*nt. Now f*ck off before I fill you in.”

Not a great start to our new Brexit dawn and as I trekked across Westminster Bridge to the Premier Inn hotel, which I decided was a better option than the vagaries of the night tube. I couldn’t help but notice the police carriers parked on towards the southern end complete with officers ‘kitted out’ in what would be normally termed ‘riot gear’ albeit minus the helmets.

A wise precaution, I thought, given the fact that those of the far right could be expected to attend the imminent celebrations and any event involving the far right normally results in abuse of and attacks on police. Quite why uniform London officers should face foul mouthed abuse and chants of ‘paedophile protectors’ for the failings of detectives in Rotherham and Rochdale remains a mystery to me.

After check-in, a return to Parliament Square saw groups dotted around the perimeter, many of whom were sporting Union Jack flags. The actual grassed area, which had been roped off since the summer to permit some sort of recovery, was already suffering with more brown muddied areas than green.

A disco lorry at the bottom of Parliament Street had drawn a crowd of around 200 and was playing some good retro music. Close-by the iconic Red Lion had decided discretion was the better part of valour and closed for the day. St Stephens Tavern around the corner, was operating some sort of door policy which was to result in lengthy queues.

Familiar faces and ladies on stilts.

A stroll up to the Trafalgar Square end of Whitehall seemed to bring on the rain while, as predicted, the Lord Moon on the Mall was again the gathering point of familiar faces who had previously attended Tommy Robinson, Yellow Vest and Football Lads Alliance protests.

And so, it was back to Parliament Square; By eight, the numbers had increased and more spectators were on the muddied area, albeit treading gingerly to avoid slipping over. A Liberty Bell stand was constantly ringing and a drum was beating while an EU flag was being trampled upon in a muddy puddle by a child cheered on by a small crowd.

Ladies on stilts were giving out ‘Brexit party’ badges while at the rear of the square, the world’s press were assembled as were a number of police officers. The atmosphere had begun to resemble that of a celebration.

By nine o’clock, a walk back up Whitehall saw considerable crowds making there was down to Parliament Square. I obliged a cheery family bedecked in Union Jacks by taking their photo and the atmosphere was purposeful and jovial. Back at the Lord Moon and its adjacent hostelries, the familiar faces, somewhat the worse for wear, were attempting to organise their walk down Whitehall.

A return to Parliament Square saw a dramatic change. Traffic had now ceased to move in the roads around the square which were occupied by thousands. A large screen effectively showed proceedings for those, including myself, far away while the loudspeaker system enabled us to hear the speeches. Nigel Farage was predictably given a hero’s welcome while the music that broke up the speeches gave proceedings a ‘Last Night of the Proms’ feel. ‘Hey Jude,’ I suspect, could be heard from miles away.

11pm was greeted with predictable rapture and then, rather surprisingly, after the National Anthem, it was all over. Even as an observer rather than a participant, I was rather hoping for a bit more music.

Dispersal of a large crowd is always a challenge, with the BTP posting themselves at the Westminster Underground Station entrances while four mounted officers were deployed at the bottom of Parliament Street which leads into Whitehall.

Someone on Parliament Square itself, decided to let off fireworks. These were of the ‘exploding rocket’ variety and clearly spooked the police horses. This, of course, is unusual due to their training and occurred on four occasions. Whilst I know absolutely nothing about horses, it seemed as if the fear of one horse communicated itself to the others although the skilled riders quickly brought them under control.

The crowds looked suitably concerned as they passed, but on the final occasion, the passing crowd now consisted of those with little regard for police and began jeering and shouting.

Whilst most of those who attended dispersed, crowds still remained on the green which was now looking extremely sorry for itself, being both a mud bath and strewn with litter.

Just after midnight, police mercifully decided that the constant noise produced by the Liberty Bell and the drum would have to end. This caused mainly good-natured booing amongst those surrounding it although one elderly man became quite agitated demanding the details of the sergeant in charge with a view to making a complaint. In many parts of the world he would have been carried off to jail but PC 853MD took him to one side and managed to mollify him. The PC in question is, I understand, very highly regarded.

That was just about that. The following day, twitter footage showed a presenter from the Irish TV station being ‘photo-bombed’ by those who could best be described as yobs with one yelling ‘f*ck the Pope.’ It was less than edifying but duly condemned by both Leavers and Remainers.

Despite minor incidents, the thousands were enthusiastic and well behaved thus effectively smothering the small numbers who had previously caused problems. Police in their ‘riot’ gear were not needed.

So, it was back to the Premier Inn and a well-deserved couple of beers plus praise from my Fitbit for walking more than 10 miles. The next morning at their excellent breakfast, it was clear that some of the guests had been present at the celebration the previous night. I couldn’t help feeling that it was slightly incongruous that the majority of the excellent staff were east European and ending freedom of Movement is one of the cornerstones of Brexit and indeed, by default, the previous night’s celebration.