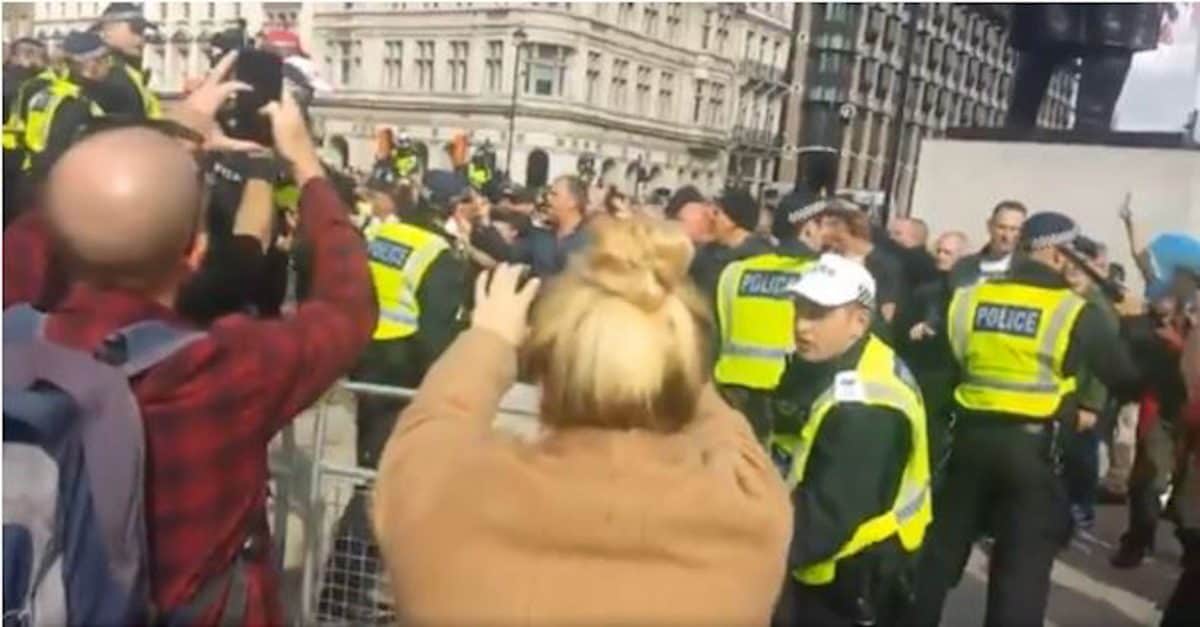 Former Trident police officer Chris Hobbs describes the attacks on police and peaceful protestors he witnessed around Westminster this weekend and asks will Boris Johnson condemn his fans from the Democratic Football Lads Alliance?

The song could be heard repeatedly throughout the afternoon; “We love you Boris, we do,” they chanted to the original tune “We love you Beatles” made famous by the Carefrees back in the ‘fab fours’ heyday.

This time however, our Prime Minister, Boris Johnson, was being feted by the so-called “patriots” of the Democratic Football Lads Alliance, during their pro-Brexit “Leave Now” protest in Parliament Square.

It wasn’t an auspicious beginning; social media suggested that thousands would attend but by the appointed meeting time of 12 noon, about 200 had assembled in one corner of Parliament Square watched by intrigued tourists.

Their numbers were to increase but only by around a hundred; however they kept their spirits high by virtue of singing the “Boris song,” the “Tommy Robinson song” intermingled with “We want Brexit Now,” “Bye bye EU,” and “You can stick the f*cking EU up your arse.”

On the opposite side of Parliament Square, again as advertised on social media was a stage-lorry where a small group of activists were setting up for a People’s Vote rally scheduled for a start time of 2pm.

It wasn’t long before activity around the stage-lorry drew the attention of small groups of DFLA attendees who came across and began hurling insults at those who were going about their business. Police had to step in but it was a worrying indication of what was to come.

Suddenly there were sounds of a disturbance coming from the lorry-stage, where Remainers were still setting up. A group of DFLA had decided to storm the stage area and some could be seen cavorting on their newly won territory. Mounted officers were quick to respond and the stage was restored to its vital occupants.

A short time later, about 30 DFLA attempted to ‘storm’ the stage area again but were again repulsed by mounted units. This inevitably attracted the attention of those in the main body of the DFLA who began predictably chanting “Who are ya?” in their direction, a chant much favoured by football fans.

The atmosphere duly soured which prompted the police to place a cordon around the DFLA protestors in an attempt to restrict the majority to their adopted corner of Parliament Square underneath the watchful gaze of Winston Churchill.

Torn between pubs and heckling

As tensions appeared to subside, a group of officers began running in formation, up Whitehall towards Trafalgar Square. At the top of Whitehall, the reason for police concern became clear. It was a group of about 50 DFLA who had left the Lord Moon on the Mall public house and noisily made their way to Trafalgar Square.

Now escorted by the same officers, the group returned back into Whitehall where, after about 100 yards they yielded to temptation and entered the Clarence Pub.

A crowd of about 100 had gathered close to the Downing Street lorry-stage and these were clearly pro-Brexit, thus there were two pro-Brexit gatherings within a five- minute walk of each other. The Parliament Square People’s Vote meeting, underway on my return, had attracted a surprisingly large crowd of Remainers complete with flags and anti-Boris placards. Their speaker system was effective and speeches could be heard across the square in the DFLA enclave.

Small groups of DFLA and Leave supporters scattered around the edges of the People’s Vote gathering engaged in chanting and heckling. Police moved in and placed themselves between the small Leave groups and Remainers.

The numbers of DFLA in their enclave were briefly increased by the arrival of those who’d been swelling the coffers of the Clarence. Gradually however those numbers decreased as the attractions of the local hostelries, including the celebrated Red Lion, proved more attractive.

Suddenly, as events seemed to be drawing to a close, those in the enclave, at the behest of kindred spirits in the nearby road, decided to rush surprised police who were standing behind barriers on the footway that bordered Parliament Square. Those officers, in their standard uniforms, drew batons and other kitted out officers inside Parliament Square rushed to assist.

At one stage both officers and DFLA protestors became crushed against, and began toppling over, a small wall before common sense prevailed.

The confrontations continued before those DFLA supporters standing on the crossroads outside the enclave began running away from Parliament Square towards Whitehall, beckoning others to follow. Their intention appeared to be to attack the other pro-Remain meeting opposite Downing Street.

Met and British Transport Police officers around Parliament Square realised what was happening and began chasing the mob with the intention of cutting them off before they reached the other meeting. Drivers of four empty police carriers parked along Whitehall realised what was occurring and frantically drove their carriers forward and then across the road attempting to form a barrier.

The mob however, simply ran between the gaps. The few officers on duty at the Downing Street meeting realised what was happening and rushed forward as those rushing up from Parliament Square managed to overtake the mob and form a cordon thus protecting the Remain meeting.

Shown on social media were confrontations as DFLA protestors still attempted to bypass the hastily established police cordon. Footage showing some trashing poppy wreaths placed around the cenotaph has been widely circulated on social media.

Frustrated and realising that more officers were coming up behind them, the mob turned back and returned in the direction of Parliament Square. Running clashes occurred between police and protestors as more police attempted form a second cordon.

Dozens of tourists (and me) became trapped between the two cordons as police took control of the situation.

As I had a previous engagement, (DJing at an 84thbirthday party) it was time to leave however footage posted on social media showed further violent clashes between police and DFLA protestors. Voice of America broadcast scenes where metal barriers were hurled at police officers.

Will Boris Johnson condemn his fans?

Doubtless Boris’s team will also be pouring over the electoral implications in relation to those who now sing and chant his name. They’ll be asking whether this indicates a wholesale defection of what has been dubbed the white working class, to the Tories and more specifically to an old Etonian, wealthy, establishment Tory?

Indications from Saturday however, are that those deemed to be on the ‘far right’ of the political spectrum have a new hero in addition to Tommy Robinson: the British Prime Minister, Boris Johnson.