Sorry, but we're not buying it. 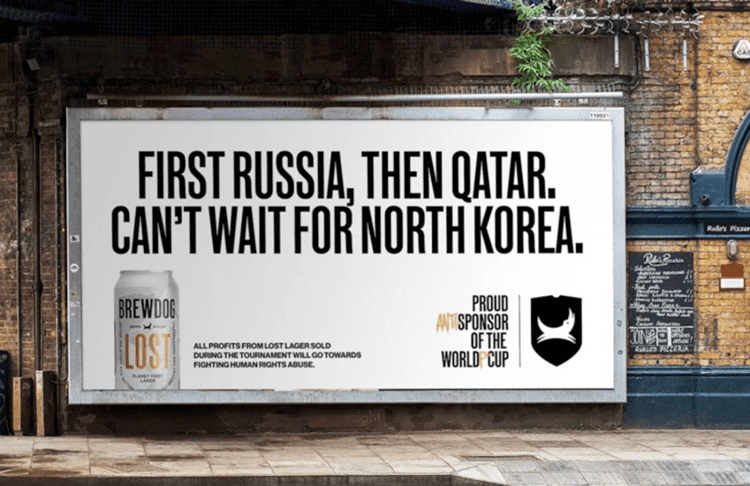 Scottish craft beer company BrewDog has launched an ‘anti-sponsorship’ campaign for the Qatar World Cup, saying it will donate profits from all Lost Lagers sold during the tournament to charities fighting human rights abuses.

On the surface, the move appears to be admirable and, in typical BrewDog fashion, has been backed up by a pithy marketing slogan mocking the decision to host successive tournaments in countries with dubious track records on civil liberties.

That point is certainly beyond debate.

This week a Qatar ambassador described homosexuality as ‘damage in the mind’, while the country’s ill-treatment of construction workers in the build-up to the tournament has been well documented.

But for BrewDog to take a punchy position on staff welfare is ballsy to say the least, given that only last year it was forced to apologise for creating a culture of fear in the business.

In an open letter signed by over 100 staff, past and present employees wrote that “being treated like a human being was sadly not always a given for those working at BrewDog”.

The letter said working at the company led staff to become mentally ill and accused the brewery of “vanity project” PR campaigns, such as when they pointed to the firm’s desire to “save the planet” while making use of a private jet.

While the craft brewers have promised to donate profits from sales of its Lost Lager, it makes no mention of the money they will make from the sale of other (often extortionately priced) beers that will be sold in its bars – largely thanks to the fact that it will be airing all World Cup games.

Once again, it would seem, the firm has become unstuck by a campaign so wrapped in self-interest it is almost absurd.

As CityAM noted in today’s editorial, in the world of modern business, consumers aren’t interested in ad campaigns and rhetoric, but in what you’re actually doing.