It is dishearteningly predictable that, the more powerful the Black Lives Matter message has become, the more it has been twisted and manipulated by those who oppose it.

by Henry Goodwin
in Opinion, Sport 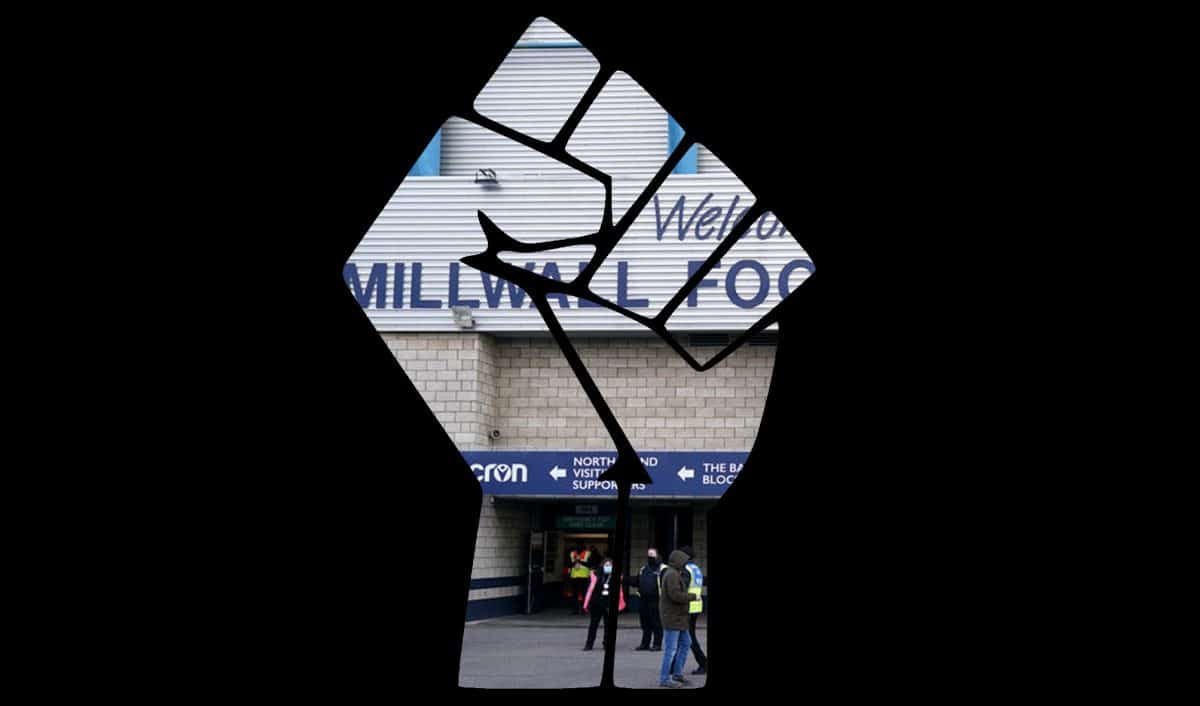 The terraces are no longer empty and – though much in the world has changed since they were occupied last – the ugliness that has stalked them for decades remains, undimmed and emboldened.

Before Saturday afternoon, the last time Millwall fans trudged down Ilderton Road towards The Den was February 29th – a little under three months before George Floyd was murdered by a Minneapolis police officer.

That awful day in May – and the convulsions it has sparked since – evidently did not pass that corner of southeast London by. And while it may have prompted introspection at the club, any newfound desire to be proactive in the face of racism clearly didn’t filter down to the fanbase. Quite the opposite.

This should have been an occasion punctuated by joy, as it was in Liverpool and across the Thames at Tottenham. Instead the first impulse of the 2,000 home fans permitted at The Den – season-ticket holders, the club’s core fanbase – was to boo.

More depressing still is the equivocation and moralising that has come since. Supporters have claimed that their actions were not racist, they were merely expressing their distaste for the “Marxist” politics of Black Lives Matter. Others leaping to their defence decried how a “single act of solidarity” has transformed into a “protracted moral lecture”.

From the outset it was dishearteningly predictable that, the more powerful the Black Lives Matter message became, the more it would be twisted and manipulated by those who oppose it.

Let’s leave aside for the moment the all-too-pervasive idea that we must ‘understand’ the grievances of racists, a media trope that does nothing but encourage phoney bothsidesism in the name of ‘balance’.

To dismiss Black Lives Matter because of its ‘politics’ – as George Eustice did on Sunday morning – is, at best, a risible example of intellectual laziness. At worst, it smacks of a wilful ignorance that makes the hope that progress is possible in Britain feel futile and naive.

“My personal view is that Black Lives Matter, capital B, L and M, is actually a political movement that is different to what most of us believe in, which is standing up for racial equality,” the environment secretary said.

It would have been fascinating to hear Eustice asked what he believes the politics of Black Lives Matter actually are. No doubt ‘Marxism’, ‘defund the police’ and ‘overthrow capitalism’ would have cropped up.

But, the thing is, that’s just not true. Black Lives Matter is a decentralised, global organisation. Its mission is “to eradicate white supremacy and build local power to intervene in violence inflicted on Black communities”.

The overwhelming majority of those who who march beneath its banner or take the knee in its name have no affiliation to it other than a profound desire to remake a systemically inequitable world. How profoundly insulting it is to suggest that they are not “standing up for racial equality”.

Ask Millwall defender Mahlon Romeo – a Black, London-born player who has represented Antigua and Barbuda – how he felt about what happened on Saturday afternoon. His own fans, he said, were “spreading hate”.

“What they’ve done is booed and condemned a peaceful gesture which was put in place to highlight, combat and stop any discriminatory behaviour and racism,” he said. “That’s it – that’s all that gesture is. But in society there is a problem – and that problem is racism.”

If that makes you feel ‘lectured at’ well, I would suggest that the problem is not the gesture – it’s you. Maybe this is one lecture worth listening to.

Related: Neville says political leaders are “out of their depth”