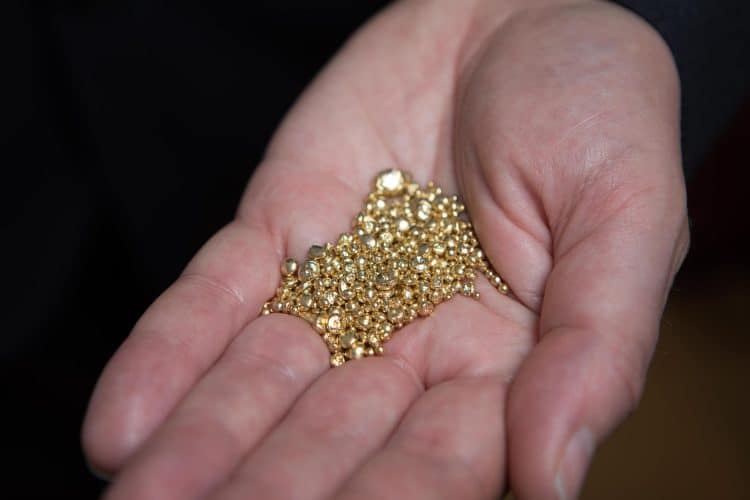 Residents opposed to a controversial gold mine in a scenic part of Northern Ireland said it is causing stress and sleepless nights for local people, as they protested in London.

The planning application for the Dalradian Gold Mine project at Greencastle, County Tyrone, was submitted in November 2017, and there have been more than 40,000 representations about the proposal.

Opposition to the mine in the Sperrin Mountains, an area of outstanding natural beauty, is focused on environmental concerns.

Fidelma O’Kane is among a dozen people in London who will hand a letter into 10 Downing Street for Prime Minister Boris Johnson on Friday, from the people of the Sperrins.

“We have come to London with a clear message: Our people do not want goldmining or Dalradian Gold.

“Thirty-eight thousand objections, a number never before recorded in Northern Ireland, have been received by the Department for Infrastructure to Dalradian Gold’s planning application for a mammoth gold mine and processing plant.”

Ms O’Kane, a retired lecturer in her 60s who lives in the area, said the long-running issue has caused people a lot of worry and stress.

She told the PA news agency: “It’s affected people’s mental health, a lot of people are having sleepless nights because they’re worried about what the future holds for their children.”

Ms O’Kane, a member of Save Our Sperrins, said people are wondering if there will still be a school in the area, and if their children will be able to live there.

“What is the future? The mining company at the consultation told us that they could relocate us.

“I mean, they don’t understand people’s attachment to the land and to the area.

Ms O’Kane said the gold mine has also caused friction within families.

Her husband, Cormac McAleer, said people need to be much more aware of the environmental implications of extractive industries.

Mr McAleer told the PA news agency: “We learned, if nothing else during the pandemic, that what we need is fresh air, clean water.

“As the old saying goes, you can’t eat money, at the end of the day.

“So we need to get our priorities straight.”

The group is calling on the Crown Estate to desist from awarding any further options to Dalradian Gold.

The Crown Estate does not grant mineral exploration rights, it grants an option to take a lease of the Mines Royal if a satisfactory planning permission is obtained for gold (or silver) extraction.

‘Mines Royal’ is the historic name for naturally occurring gold and silver, virtually all of which deposited in England, Wales and Northern Ireland is owned by The Crown Estate.

Those interested in mineral exploration and extraction must follow all statutory processes and procedures such as Town and Country Planning legislation and may require exploration licences from the Department for the Economy in Northern Ireland.

Exploration companies also need to enter into private contractual arrangements for access and other relevant factors with any relevant landowners.

Dalradian has said in the past that the mine would transform the economy of the area.

In September this year it was announced that Infrastructure Minister Nichola Mallon was to formally request that the Planning Appeals Commission hold a public inquiry into the Dalradian Gold Mine project.