X-Rays have revealed the source of the destructive power behind parrotfish teeth. Researchers have found an Interwoven crystal structure is the key to their coral-crunching ability. The hardy gnashers of the parrotfish allow it to chomp on coral all day long, ultimately chewing and grinding it up through digestion into fine sand. A single parrotfish […] 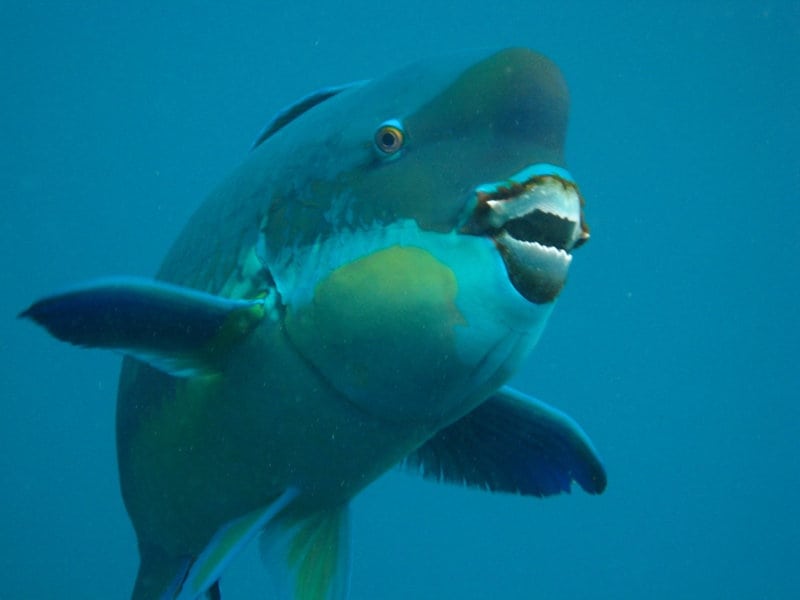 X-Rays have revealed the source of the destructive power behind parrotfish teeth.

Researchers have found an Interwoven crystal structure is the key to their coral-crunching ability.

The hardy gnashers of the parrotfish allow it to chomp on coral all day long, ultimately chewing and grinding it up through digestion into fine sand.

A single parrotfish can produce hundreds of pounds of sand each year.

Now, a study has revealed a chain mail-like woven microstructure that gives parrotfish teeth their remarkable bite and resilience.

Researchers say the natural structure also provides a blueprint for creating ultra-durable synthetic materials that could be useful for mechanical components in electronics, and in other devices that undergo repetitive movement and abrasion.

Study first author Doctor Matthew Marcus, of the US Department of Energy’s Lawrence Berkeley National Laboratory, became intrigued by parrotfish during a 2012 visit to the Great Barrier Reef off the coast of Australia.

A sea-life video he watched on a tour boat reminded him of the role of parrotfish in breaking down coral into fine sand.

They mainly feast on the polyps and algae that live on the surface of coral skeletons, and help to clean up reefs.

The hardness of parrotfish teeth measured near the biting surface is about 530 tons of pressure per square inch – equivalent to 88 African elephants compressed to a square inch of space.

Dr Marcus said: “I was reminded that this is a fish that crunches up coral all day, and is responsible for much of the white sand on beaches.

“But how can this fish eat coral and not lose its teeth?”

He asked Pupa Gilbert – a biophysicist and Professor at the University of Wisconsin-Madison who studies how living things produce minerals – if she was interested in studying the parrotfish teeth.

She led an international team in the study, receiving parrotfish beaks from collaborators in French Polynesia.

In PIC mapping, the polarisation of X-rays is rotated to enable the analysis and display of nanoscale crystal orientation in nacre and other biominerals.

Prof Gilbert said: “The ALS is the first place where PIC mapping was done.

“You can understand at a glance how every nanocrystal in a given image is oriented.”

She added: “If you are looking at a tooth, or a bone, or a mollusc shell, or a piece of coral, this is super-interesting.

“It tells you how nanocrystals are arranged with respect to one another. You can see these beautiful images that look better than abstract art, and learn how biominerals form and function.”

In the new study, the researchers wanted to see how the fine crystal structure of parrotfish teeth contribute to their incredible strength.

They were able to visualise the orientation of individual crystals, which showed their intricately woven structure.

The bundles decrease in average diameter from about five microns to about two microns toward the tip of each tooth.

While tooth enamel from many different species of animals can appear similar to conventional microscopes, Prof Gilbert noted that these images can overlook the unique orientation of crystals in the enamel structure of teeth.

And the crystal orientation, she said, “tells a big story about how different teeth are specialised for different functions.”

In the case of parrotfish, the continuously growing rows of teeth, which form a beaklike structure that constantly replaces older, worn teeth with new teeth, are also integral to their specialised feeding behaviour.

Prof Gilbert said: “Parrotfish teeth are the coolest biominerals of all.

“They are the stiffest, among the hardest, and the most resistant to fracture and to abrasion ever measured.”

She said parrotfish have about 1,000 teeth situated in about 15 rows, and each tooth is cemented to all of the others and surrounded by bone to form a solid beak – shark’s teeth, by contrast, are not interconnected in the same way.

The mechanical measurements for the study, which focused on teeth samples from a steephead parrotfish, found that the hardness and stiffness increases toward the tip of each tooth.

The PIC mapping experiments revealed that as the hardness and stiffness increases, the diameter of the crystal bundles narrows.

Prof Gilbert added: “The interwoven characteristic and the crystal orientations are completely open to be explored for the production of synthetic material.

“Weaving is one of the oldest things that people have learned how to do. You could think of actually weaving crystals, as crystals become flexible when they are very thin.”

The findings were published online by the journal ACS Nano.