“Today the people have obtained justice. We have reversed authoritarianism," she said. 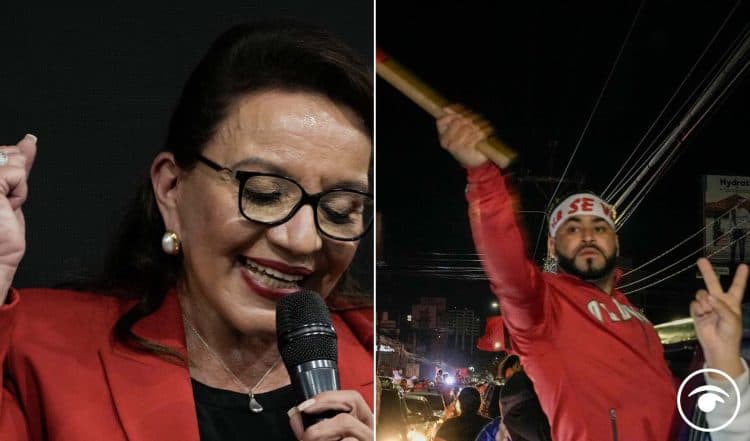 Ms Castro declared herself the winner despite orders from the National Electoral Council to political parties to await official results.

“We win! We win!” announced Ms Castro, Honduras’s former first lady – who is making her third presidential run – to cheering Liberty and Refoundation (Libre) Party supporters when only a fraction of the ballots had been tallied. “Today the people have obtained justice. We have reversed authoritarianism.”

The National Party also quickly declared victory for Nasry Asfura, its own candidate and mayor of the capital, Tegucigalpa, but the early returns were not promising.

By early on Monday, Ms Castro’s wide early lead was holding up. With 45% of the polling station tallies in, she had 53% of the votes and Mr Asfura 33%, according to the National Electoral Council preliminary count. The council said turnout was more than 68%.

Anticipating vandalism, some businesses along the boulevard had covered their windows with wood or metal sheeting, but the celebration appeared peaceful.

In 2017, after a protracted election filled with irregularities, protesters filled the streets and the government imposed a curfew. Three weeks later the now-outgoing President Juan Orlando Hernandez was declared the winner despite the Organisation of American States’ observation mission calling for an election re-run. At least 23 people were killed.

Late on Sunday, Ms Castro promised a permanent dialogue with the Honduran people and said she wanted to open conversations with all sectors of society and international organisations to seek solutions for the Central American country, which is recovering from two major hurricanes, troubled by gangs and enduring corruption and high levels of poverty.

Her husband, a former president who was ousted by a military coup in 2009, did not appear on stage with her, but her son and daughter were there.

Ms Castro received a late surge of support when Salvador Nasralla, who lost to Hernandez in 2017, ended his own candidacy and joined her alliance in October. The move took a three-way race that could have favoured Mr Asfura to just two.

Ms Castro rode a wave of dissatisfaction with the National Party’s rule. President Hernandez became a national embarrassment, with US federal prosecutors in New York accusing him of running a narco state and fuelling his own political rise with drug money. He has denied it all and has not been formally charged, but that could change once he leaves office.

In addition to a new president, Hondurans on Sunday chose a new congress, new representatives to the Central American Parliament, and voted in a slew of local races.

The Organisation of American States’ observation mission said in a statement late on Sunday that the voting had appeared to be “appropriate and peaceful”.