The Palestinian Red Crescent emergency service said it treated 152 people, many of them wounded by rubber-coated bullets or stun grenades, or beaten with batons. 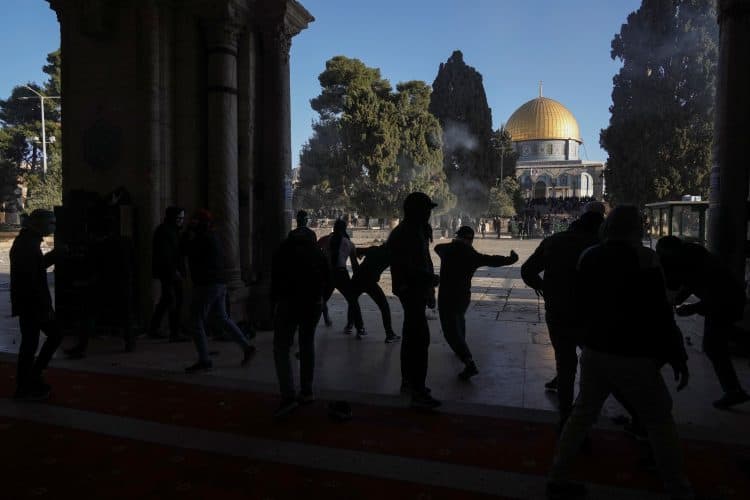 Clashes between Israeli police and Palestinians at a major holy site in Jerusalem have wounded at least 152 Palestinians, according to medics.

Israel said its forces had come to the Al-Aqsa mosque compound to remove rocks and stones that had been gathered in anticipation of violence. The holy site, which is sacred to Jews and Muslims, has often been the centre of waves of Israeli-Palestinian unrest.

Videos circulating online showed Palestinians hurling rocks and police firing tear gas and stun grenades on the sprawling esplanade surrounding the mosque. Others showed worshippers barricading themselves inside the mosque itself amid what appeared to be clouds of tear gas.

Hours after the clashes began, police said they had put an end to the violence and arrested “hundreds” of suspects.

They said the mosque was reopened and that Friday’s midday prayers would take place as usual. Tens of thousands of people were expected.

Israeli authorities said they had earlier held negotiations with Muslim leaders to ensure calm and allow the prayers to take place, but that Palestinian youths hurled stones at the Mughrabi Gate, which leads to the Western Wall, triggering the violence.

The Palestinian Red Crescent emergency service said it treated 152 people, many of them wounded by rubber-coated bullets or stun grenades, or beaten with batons.

Israeli police said three officers were wounded from “massive stone-throwing”, with two evacuated from the scene for treatment.

“Police were forced to enter the grounds to disperse the crowd and remove the stones and rocks, in order to prevent further violence,” it tweeted.

The police said in a statement they waited until prayers were over and the crowds started to disperse. It said crowds started hurling rocks in the direction of the Western Wall, a nearby Jewish holy site, forcing them to act. They said they did not enter the mosque itself.

Palestinians view any large deployment of police at Al-Aqsa as a major provocation.

Israeli Prime Minister Naftali Bennett, speaking at a holiday gathering with security officials, said authorities “are working to calm things on the Temple Mount and throughout Israel. At the same time, we are prepared for any scenario”.

The mosque is the third holiest site in Islam. It is built on a hilltop that is the most sacred site for Jews, who refer to it as the Temple Mount.

Tensions have soared in recent weeks following a series of attacks by Palestinians that killed 14 people inside Israel. Israel has carried out a wave of arrests and military operations across the occupied West Bank, setting off clashes with Palestinians.