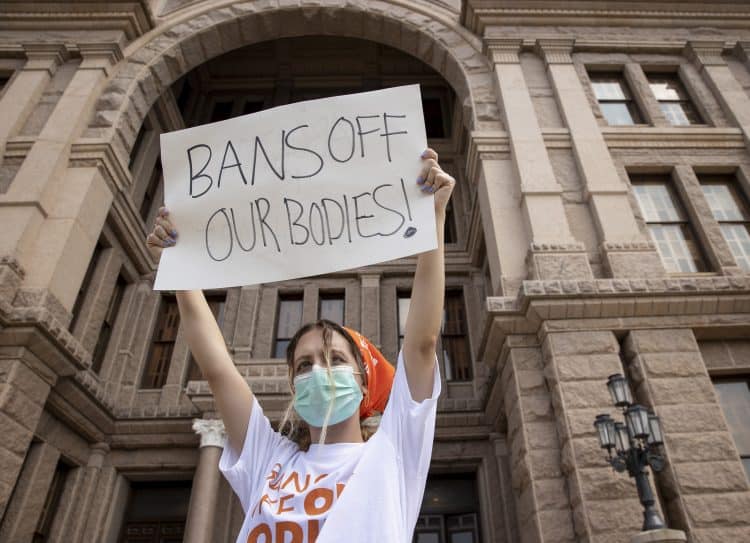 A law banning most abortions has come into effect in the US state of Texas.

The law represents the most dramatic restriction on abortion rights in America since the high court’s landmark Roe v Wade decision legalised abortion across the country in 1973.

The Supreme Court has yet to act on an emergency appeal to put the Texas law – which would prohibit abortions once a foetal heartbeat can be detected, usually at around six weeks and before most women know they are pregnant – on hold.

In a statement issued after the law took effect, US president Joe Biden said it “blatantly violates the constitutional right established under Roe v Wade and upheld as precedent for nearly half-a-century”.

And he said the law “outrageously” gives private citizens the power “to bring lawsuits against anyone who they believe has helped another person get an abortion”.

Marc Hearron, a lawyer for the Centre for Reproductive Rights, told reporters that “as of now, most abortion is banned in Texas”.

Mr Hearron said his group and the abortion providers it represented were still hoping to hear from the Supreme Court.

Abortion providers who are asking the Supreme Court to step in said the law – signed by Republican Governor Greg Abbott in May – would rule out 85% of abortions in Texas and force many clinics to close.

Planned Parenthood is among the abortion providers that have stopped scheduling abortions beyond six weeks from conception.

Abortion rights advocates say the Texas law will force many women to travel out-of-state for abortions, if they can afford to do so and also navigate issues including childcare and taking time off work. It is also expected to increase the number of women seeking to self-induce abortions using pills obtained by post.

At least 12 other states have enacted bans on abortion early in pregnancy, but all have been blocked from taking effect.

What makes the Texas law different is its unusual enforcement scheme. Rather than making officials responsible for enforcing the law, private citizens are authorised to sue abortion providers and anyone involved in facilitating abortions.

One example would be anyone driving a woman to a clinic to get an abortion.

Under the law, anyone who successfully sues another person would be entitled to at least 10,000 US dollars (£7,270).

Abortion opponents who wrote the law also made it difficult to challenge in court, in part because it is hard to know who to sue.

Texas has long had some of the nation’s toughest abortion restrictions, including a sweeping law passed in 2013 that the Supreme Court eventually struck down but not before more than half of the state’s 40-plus abortion clinics closed.

Politicians are also moving forward in an ongoing special session in Texas with proposed new restrictions on medication abortion, a method using pills that accounts for roughly 40% of abortions in the US.

Related: ‘We stand with women in Poland’ as country delays implementing abortion ruling amid nationwide protests