In addition to serving food and non-alcoholic drinks and offering the warmth of indoors, the restaurant provides its bathrooms for the homeless to wash in. 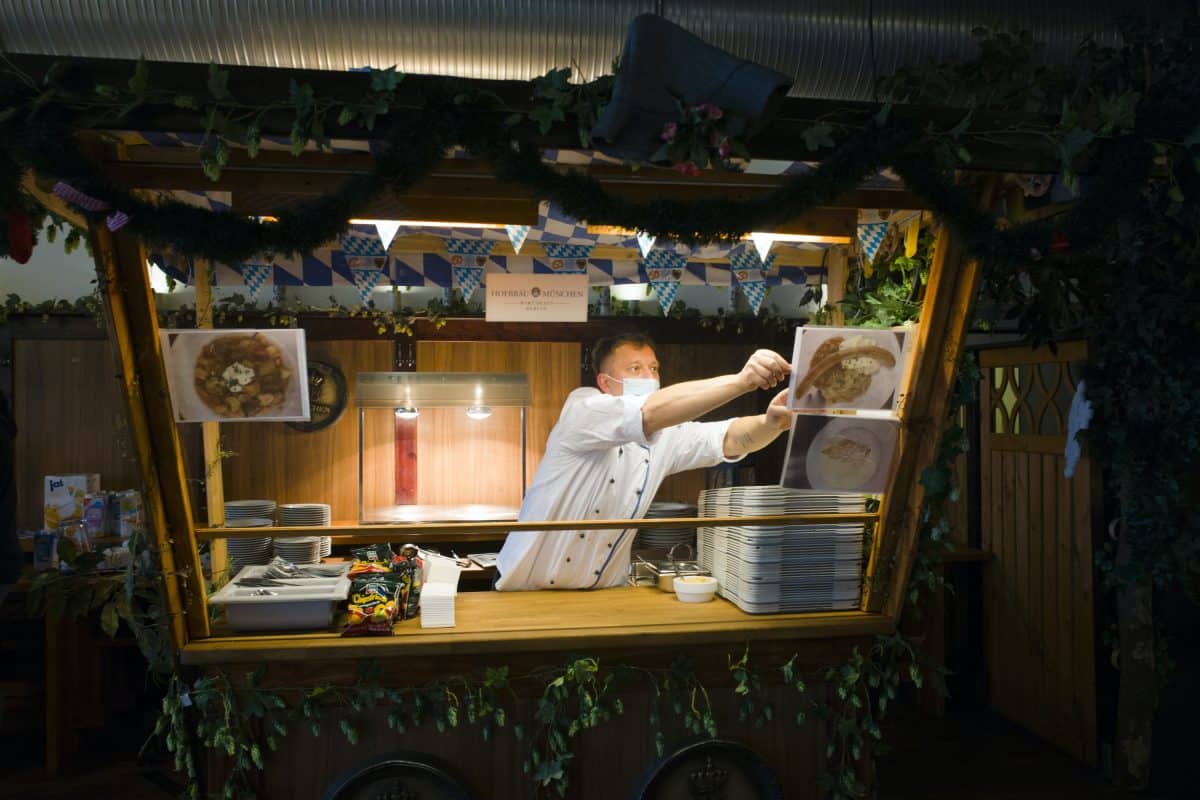 The coronavirus pandemic has not made life on the streets of Berlin any easier for Kaspars Breidaks.

For three months, the 43-year-old Latvian has faced homeless shelters operating at reduced capacity so that people can be kept at a safe distance from one another.

And with fewer Berliners going outdoors, it is much harder to raise money by begging or collecting bottles to sell for recycling.

But on a chilly winter morning this week Mr Breidaks found himself with a free hot meal and a place to warm up, after the German capital’s biggest restaurant, the Hofbrau Berlin – itself closed down due to coronavirus lockdown restrictions – shifted gear to help the homeless.

“Other homeless people at the train station told me about this place,” Mr Breidaks said, removing a furry black hat with long ear flaps as he sat on a bench in the warm, spacious beer hall near Berlin’s landmark Alexanderplatz square.

“I came here for hot soup.”

It was a restaurant employee who volunteers at a shelter who proposed opening up the shuttered Bavarian-style beer hall, patterned after the famous Munich establishment of the same name, to the homeless.

As well as helping out the homeless during tough times the city-funded project also gives needed work to employees and provides the restaurant with welcome income.

In co-operation with the city and two welfare organisations, the restaurant quickly developed a concept to take in up to 150 homeless people in two shifts every day until the end of the winter, and started serving meals on Tuesday.

It is only a small number compared with the 3,000 restaurant guests, primarily tourists, who would pack the establishment during good times.

But the spacious halls have proved perfectly suited to bring in the homeless and give them each plenty of space to avoid infections.

“Normally, during Christmas time, we would have many groups here for Christmas parties and then we’d serve pork knuckles, half a duck or goose … but not at the moment,” said Mr Schwarz.

“We’re still doing delivery, but obviously that’s only a drop in the bucket.”

In addition to serving food and non-alcoholic drinks and offering the warmth of indoors, the restaurant provides its bathrooms for the homeless to wash in, and relief groups have workers on hand to provide counselling and new clothes, if needed.

For its new customers, the restaurant opened a second-floor, wooden-decorated hall and put up 40 long tables.“We’ll offer them something different from the regular soup kitchen food – real dishes on porcelain plates, with different sides, we’ll try to offer Christmas-style dishes with lot of flavours,” Mr Schwarz said.

Mr Breidaks went to Germany three months ago looking for work. But he says a promised meat factory job never materialised and he ended up on the streets of Berlin begging for the money needed to replace a stolen passport and buy a bus ticket back home.

He is one of an estimated 2,000 to 12,000 people who remain homeless in the city of 3.6 million, even after another 34,000 were put up in community shelters, hostels and apartments by social services and private welfare groups.

“They don’t have enough to eat and when it’s cold they must have places to warm up,” Ms Breitenbach added.

On Thursday, the first shivering group that entered the Hofbrau along with Mr Breidaks were served either Thuringia-style bratwurst with mashed potatoes, sauerkraut and onion sauce, or a vegetarian stew with potatoes, courgette, bell pepper and carrots. For dessert there was apple strudel with vanilla sauce.

For Mr Breidaks, that was more than he had expected after spending a night in sub-zero temperatures huddled up next to the walls of a big department store on Alexanderplatz.

Related: ‘Died without the dignity of a stable home’ as homeless deaths rise for fifth year in row