The newly-re-elected Israeli Prime Minister Biyamin Netanyahu vowed today to name a settlement in the Golan Heights after Donald Trump.  The move by newly elected Netanyahu is to thank Trump for flouting international law and recognising Israeli sovereignty over the lands just before the Israeli elections. Israel captured the region to its North along the […] 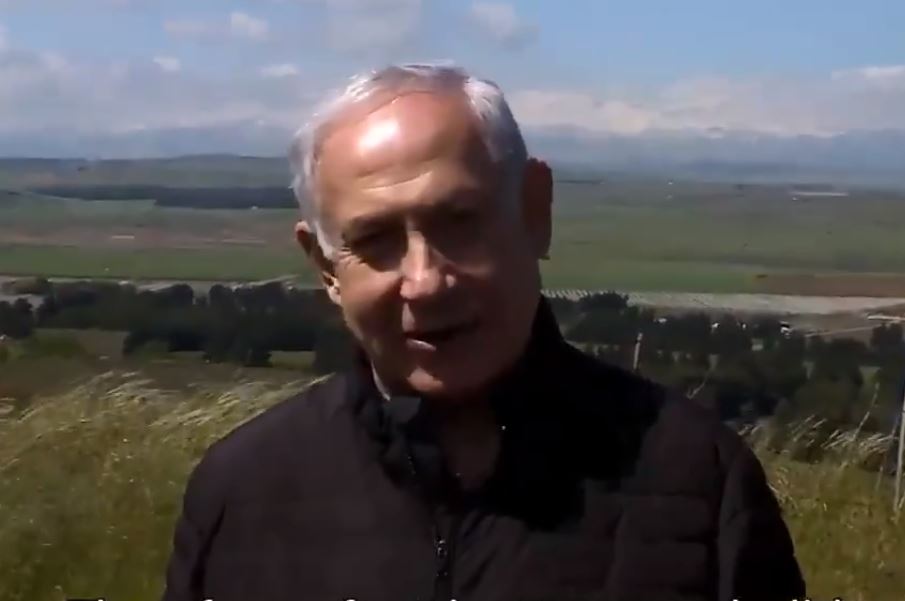 The newly-re-elected Israeli Prime Minister Biyamin Netanyahu vowed today to name a settlement in the Golan Heights after Donald Trump.

The move by newly elected Netanyahu is to thank Trump for flouting international law and recognising Israeli sovereignty over the lands just before the Israeli elections.

Israel captured the region to its North along the Syrian border during the Six Day War in 1967 and it has been occupied ever since despite UN resolutions against Israel’s annexation of the strategic mountain region.

Yet last month the US unilaterally recognised the disputed region as part of Israel, and on Tuesday last week the Trump administration was already publishing maps showing the Golan Heights as Israel.

PM Netanyahu will present to the government a resolution calling for naming a new community in the Golan Heights after @POTUS Donald Trump, as a token of appreciation for his recognition of Israel's eternal sovereignty over the Golan. pic.twitter.com/buGR93lAob

“All Israelis were deeply moved when President Trump made his historic decision,” said the Israeli PM in a video statement made in the region, where he is travelling with his family following his election victory, vowing to “bring to the government a resolution calling for a new community on the Golan Heights named after President Donald J. Trump.”

The Jewish settlement may be named Kiryat Trump in honour of the President who made the controversial move to recognise Israel’s claim over the Golan Heights.

This followed another controversial move by Trump to flout international opinion and move the US embassy in Israel to Jerusalem as the Israeli capital, breaking decades of US policy over the ancient city claimed as a Palestinian capital too.

Netanyahu was elected to a record fifth term as Israeli PM after a controversial heightened race-fuelled campaign in which his party activists filmed Israeli Arabs voting and accused opposition parties of forming coalitions with Palestinians.

He also made much of his relationship with Donald Trump, and the US President’s controversial moves over Jerusalem and the Golan Heights.

In a move many felt was choreographed, Donald Trump recognised Israeli sovereignty over the Golan Heights in late March, just two weeks before the April 9 elections.

Israel captured the Golan from Syria in the 1967 Six Days War. Israeli and US sources much of the local population of 100,000 fled as a result of the war, whereas the Syrian government stated that a large proportion of it was expelled.

In the 52 years that followed, Israel has not allowed former residents to return, citing security grounds, and Israeli settlements in the region soon followed.

The international community has not recognised the annexation until now.

UN Resolution 242 clearly calls for the “withdrawal of Israeli armed forces” from territories occupied in the Six-Day War: meaning the Sinai Peninsula, West Bank and the Golan Heights. UN Resolution 497 goes further, highlighting the illegality of the Israeli occupation: “The Israeli decision to impose its laws, jurisdiction and administration in the occupied Syrian Golan Heights is null and void and without international legal effect.”

All 28 EU members have unanimously refused to recognise Israeli sovereignty over the Golan Heights, in line with UN Security Council resolutions 242 and 497.