Bristol punks keep their relentless tour rolling through the capital. 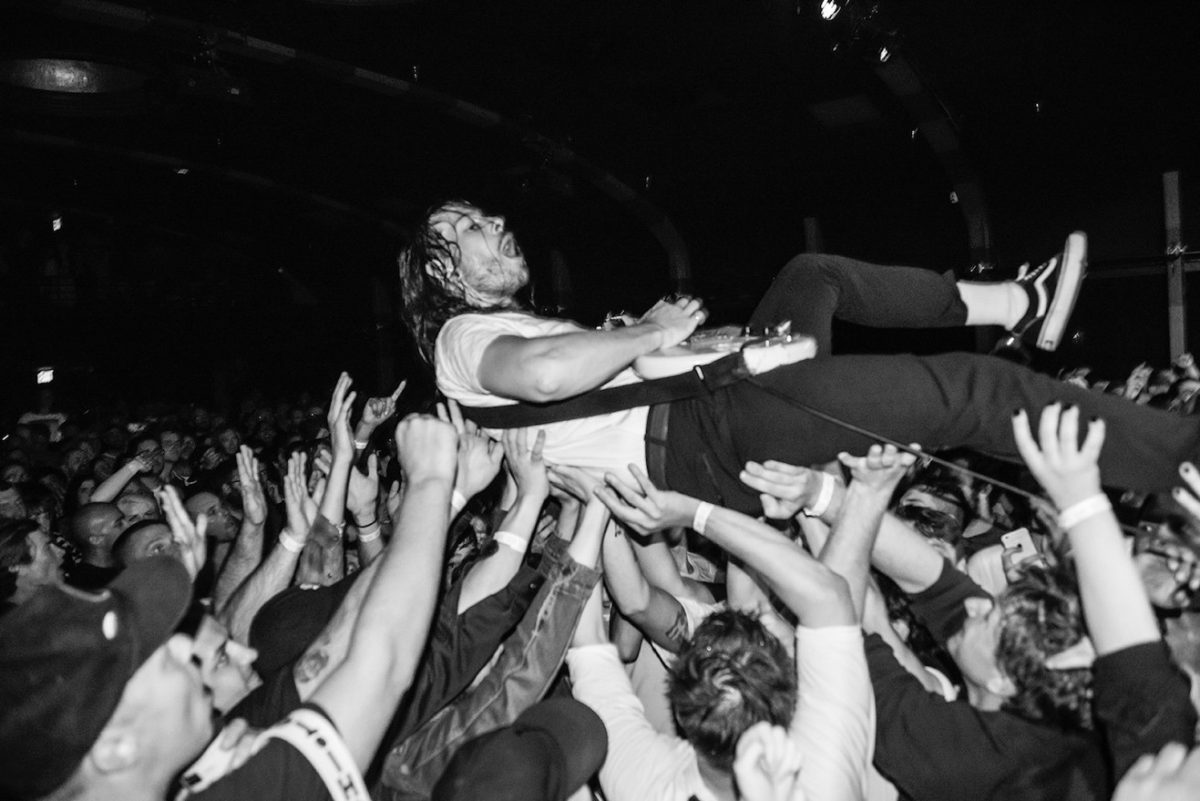 Bristol punks Idles are having a boom year. On the back of 2018’s Joy As An Act of Resistance, proving debut proper Brutalism was no fluke, the band have found their brand of wide eyed, all-inclusive message rock carried by audiences across the country and over the pond to the US. The AF outlook has proved universal in troubling socio-political times, potent enough to fill Camden’s Electric Ballroom for three nights on the bounce.

Openers LIFE are a more straightforward garage racket. The Hull quartet deliver their wiry post punk with the directness of an open palm across the cheek, weaving danceable rhythms around atonal vocals. They wear their wry anarchism right down their drainpipes, with the chorus of ‘Popular Music’ arriving in gouts of spit, shot through with a spiny backbone live which is lost on the glossy studio release.

Comparatively, Idles are enigmatic punks, imbued with an edgier darkness in the flesh. Even from the confines of your headphones Joy As An Act of Resistance is a tough listen. Frontman Joe picks at wounds, personal, national and existential, and the results are rarely clean or conclusive across its runtime. Laid out on the stage, exposed from beneath any softening production, their music bites even harder. ‘Colossus’ as an opener is a spiralling dirge about binge drinking and the cracks and stains left by living to bitter excess, before the brainless catharsis of its conclusion. Catharsis which carries through to the comparatively jovial ‘Never Fight A Man With A Perm’, which is both gloriously juvenile and ridiculously catchy.

Similarly raucous choruses from ‘I’m Scum’ and ‘Rottweiler’ are precision engineered to squeeze bodies in the pit and shred voiceboxes. As a crowd experience it’s a joy of a display – if Idles have achieved one thing most firmly it’s in resonating with their fans through a clear ethos of community. People are passionate about Idles. Turning eyes to the stage, it’s uncertain if, tonight, Joe shares in their passion. Fronting the band looks to be at once the most affirming and draining thing he could be doing. Undeniably, Idles are giving everything they have – and have been doing so as far back as day one of the tour. It is a relentlessly positive, exhausting place to be – wonderful to dip into as a spectator to wheel some limbs – but on this, their second night of three at the Electric Ballroom, Joe looks and sounds between tracks like he might want a lie down.

Not to discredit the energy Idles output. The show is utterly kinetic, from the glib punch-drunk stomp of ‘Love Song’ to the caustic bark of ‘Mother’, the mid-set lull never threatens, only the looming melodic carnage of ‘Danny Nedelko’ and ‘Well Done’; tracks who’s presence hang over the night in a haze of anticipation. And when the chorus of the former arrives, it is bedlam. As an anthem of acceptance and inclusivity in a multi-cultural society currently tonguing at its fissures, ‘Danny Nedelko’ is an unparalleled banger in the Idles catalogue, and there are moments in its runtime where the room at large struggles to articulate the distilled outpouring of communal pride. The result is equal parts jubilance and sweat. For four minutes, hundreds of people sing in a cynicism-free vacuum of deafening positivity, which is as irrational as it is important. It also feels like an unsustainable level to operate at. It’s an excellent spectacle to watch the wheels almost come off, in the way punk music has always excelled, but pushing so hard might have its limits on the minds and bodies of Idles, laying it out on stage like this, in the long run.