The Prime Minister was facing criticism for his silence while on holiday in the Caribbean during the escalating crisis. Foreign Secretary Dominic Raab defended Johnson, saying he has been in “constant contact” with the PM who remained “in charge” throughout his holiday. 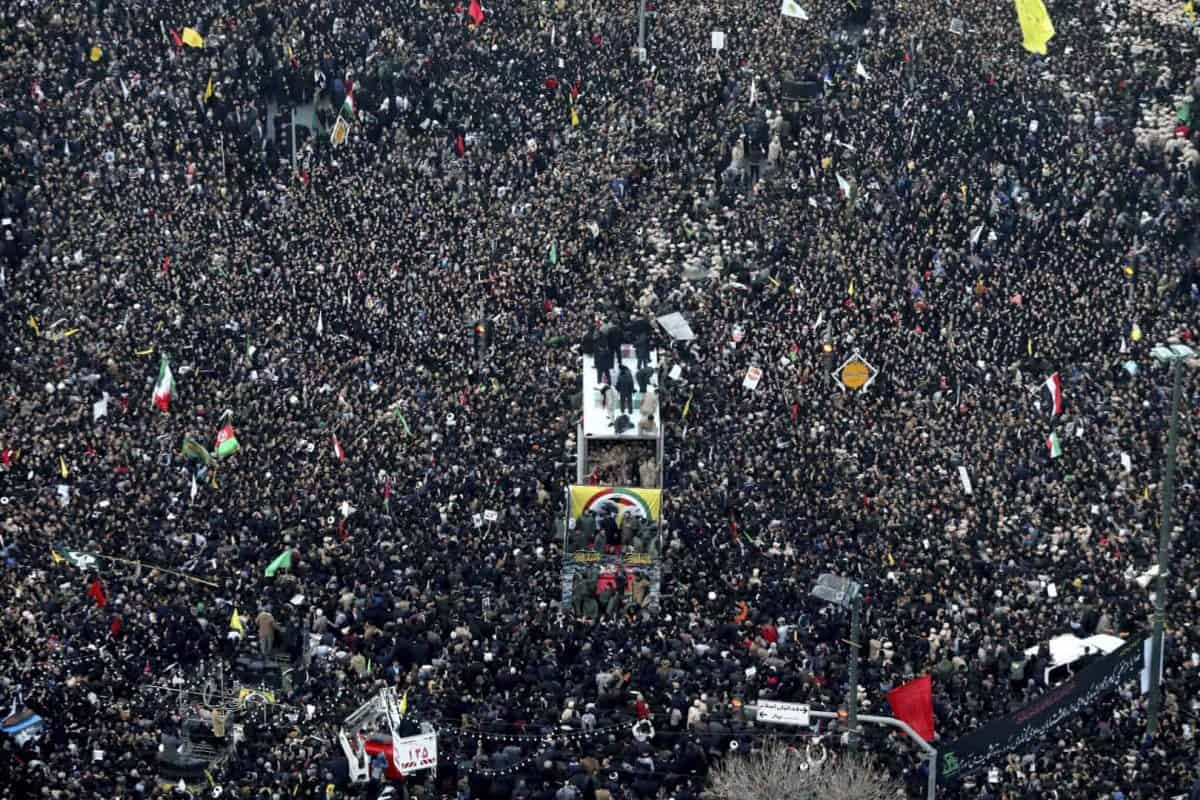 Iran has said it will no longer abide by any of the limits of its unravelling 2015 nuclear deal with world powers after a US air strike killed a top Iranian general in Baghdad.

It ends an accord that blocked Tehran from having enough material to build an atomic weapon.

The announcement came on Sunday night after another Iranian official said it would consider taking even harsher steps over the US killing of General Qassem Soleimani on Friday.

Hundreds of thousands of people flooded the streets in Iran on Sunday to walk alongside a casket carrying the remains of General Soleimani, the former leader of its expeditionary Quds Force that organises Tehran’s proxy forces in the wider Mideast.

Israeli cities could be targeted by Iran

The leader of one such proxy, Lebanon’s Hezbollah, said General Soleimani’s killing made US military bases, warships and service members spread across the region fair targets for attacks.

A former Revolutionary Guard leader suggested the Israeli city of Haifa and “centres” like Tel Aviv could be targeted.

Iran’s state TV cited a statement by President Hassan Rouhani’s administration saying the country will not observe limitations on its enrichment, the amount of stockpiled enriched uranium as well as research and development in its nuclear activities.

The International Atomic Energy Agency, the United Nations watchdog observing Iran’s programme, did not immediately respond to a request for comment.

Iran said its co-operation with the IAEA “will continue as before”.

Iraq votes to kick US troops out

Meanwhile, Iraq’s Parliament voted in favour of a resolution calling for an end of the foreign military presence in their nation, an effort aimed at expelling the 5,000 US troops stationed there over the war against the so-called Islamic State.

General Soleimani’s killing has escalated the crisis between Tehran and Washington after months of trading attacks and threats that have put the wider Middle East on edge.

The conflict is rooted in US President Donald Trump pulling out of Iran’s atomic accord and imposing sanctions that have crippled Iran’s economy.

Iran has promised “harsh revenge” for the US attack, which shocked Iranians across all political lines.

After thousands in Baghdad on Saturday mourned General Soleimani and others killed in the strike, authorities flew the general’s body to the south-western Iranian city of Ahvaz.

An honour guard stood by early on Sunday as mourners carried the flag-draped coffins of Gen Soleimani and other Guard members off the Tarmac.

The caskets then moved slowly through streets choked with mourners wearing black, beating their chests and carrying posters with Gen Soleimani’s portrait.

Demonstrators also carried red Shi’ite flags, which traditionally both symbolise the spilled blood of someone unjustly killed and call for their deaths to be avenged.

Assassination compared to US downing of Iranian passenger plane

Officials brought Gen Soleimani’s body to Ahvaz, a city that was a focus of fighting during the bloody 1980-88 war between Iraq and Iran, in which he slowly grew to prominence.

His remains will go to Tehran and Qom on Monday for public mourning processions, followed by his hometown of Kerman for burial on Tuesday.

Gen Soleimani will lie in state at Tehran’s Musalla mosque on Monday.

Iranian officials planned to meet on Sunday night to discuss taking a fifth step away from its 2015 nuclear deal with world powers, one that could be even greater than planned, Foreign Ministry spokesman Abbas Mousavi told journalists.

“In the world of politics, all developments are interconnected,” Mr Mousavi said.

Iran previously has broken limits of its enrichment, its stockpiles and its centrifuges, as well as restarted enrichment at an underground facility.

The Iranian Parliament on Sunday opened with politicians in unison chanting: “Death to America!”

Parliament speaker Ali Larijani compared General Soleimani’s killing to the 1953 CIA-backed coup that cemented the shah’s power and to the US Navy’s shooting of an Iranian passenger plane in 1988 that killed 290 people.

He also described American officials as following “the law of the jungle”.

Boris Johnson accused General Qassem Soleimani of being “a threat to all our interests” and said “we will not lament his death” but he also called for de-escalation from all sides.

The Prime Minister was facing criticism for his silence while on holiday in the Caribbean during the escalating crisis. The Foreign Secretary defended Johnson, saying he has been in “constant contact” with the PM who remained “in charge” throughout his holiday.

Dominic Raab also defended Donald Trump’s decision to launch the drone strike, accusing hardliners in Tehran of “nefarious behaviour” and saying the US has the “right of self defence”.

But he called for the pursuit of a diplomatic route to bring Tehran “in from the international cold” as Iran accused the US president of breaching international law.

“The US will take their own operational judgment call but they’ve got the right of self defence,” Mr Raab told Sky’s Sophy Ridge on Sunday as he defended the PM not responding to the crisis while on holiday.

“So we understand the position the US were in and I don’t think we should be naive about the Iranian Revolutionary Guard or indeed General Soleimani.”