Border Force intercepted what is thought to be the highest number of migrants in a single day amid warnings the closure of French camps could prompt a spike in Channel crossings. 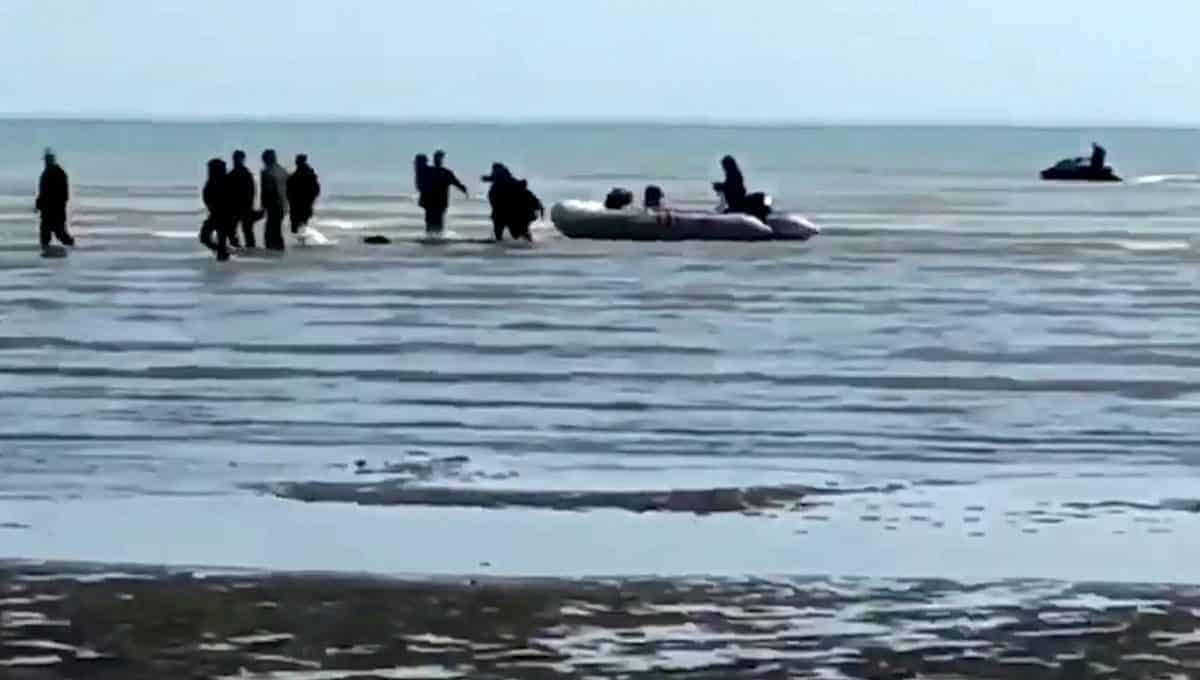 Yesterday we revealed that French authorities intend to evict and disperse hundreds of homeless refugees in Northern France amid warning of the chaos that would cause.

The actions may be the result of a political need to “take action” following Priti Patel’s visit to France last week to meet with her French counterpart.

As hundreds of people in these camps panic about their future, the news has emerged that 86 men, women and children attempted the dangerous journey across the English Channel in small boats on Tuesday.

Border Force intercepted what is thought to be the highest number of migrants in a single day amid warnings the closure of a French camp could prompt a spike in Channel crossings.

It is thought to be the most intercepted by UK authorities alone on a single day so far, with some managing to land on beaches before being detained.

The news comes as a charity warned the imminent closure of a gym in Dunkirk where up to 1,000 migrants are living is likely to prompt a spike in crossing attempts.

Refugee charity Care4Calais expects French authorities to conduct forced evictions at Dunkirk and Calais this week, with hundreds of migrants displaced as a result.

Charity founder Clare Moseley said the charity has been told the gym is to be closed following a failed court appeal and she expects this to lead to rise in attempts to cross the Channel to the UK.

Many of those living at the Espace Jeunes du Moulin gym are families with young children, some of whom have fled the Islamic State conflict in Iraq.

She said: “There has been a bit of uncertainty as to when it’s going ahead.

“The latest we have heard is it’s likely to be Thursday. We think the Calais one is probably going to be tomorrow.”

“At the end of the day they are trying to get their families to safety.”

Mrs Moseley said the French government will offer evicted migrants alternative accommodation, but predicts a significant number will return to the coast based on previous instances.

Asked if the closure of the gym will lead to an increase in attempted crossings, Mrs Moseley said: “Absolutely, yes.

“It’s not that they are not trying to cross now, because they are, but it can only make it worse.

“At the end of the day they are trying to get their families to safety.”

“This strategy of continual forced evictions has been followed for many years now – certainly enough to clearly demonstrate it is a pointless exercise,” the founder of Care4Calais told The London Economic.

“Evictions have no effect on the underlying issues that cause people to risk their lives on dangerous journeys to the UK. Even the major destruction of the Calais Jungle in October 2016 did not change this.

“With these major evictions the need for sleeping bags and tents will be higher than ever before,” Mrs Moseley added.

The charity is pleading for urgent help in the wake of the evictions. For more information: www.care4calais.org, www.facebook.com/care4calais/ or for nearest drop off point for clothes and sleeping bags: https://care4calais.org/thedropoffmap/.

Last month, Home Secretary Priti Patel said urgent action was needed to put a stop to the wave of crossings, after she met French interior minister Christophe Castaner in Paris.

The Home Office declared the matter a major incident under former home secretary Sajid Javid and pledged millions of pounds to tackle the crossings, dispatching the three Border Force cutters.

A plan drawn up in January included a £6 million investment in security equipment, CCTV coverage of beaches and ports and a mutual commitment to return migrants under international and domestic laws, the department said.

But the number of migrants taken in by UK authorities so far this year is thought to have already passed 1,000.

Border Force ships intercepted four boats on the busiest day for crossings this year – but missed two others that landed on the south coast. The 92 men, women and children are being processed by Border Force officers at a makeshift centre in Dover, Kent.

Early on Tuesday, two small vessels carrying a total of 23 people were intercepted by a Border Force cutter before being taken to immigration officials for questioning.

They said they were Iranians, Afghans, Pakistanis and Filipinos, the Home Office said.

At about midday, a boat carrying 18 people near Dungeness, Kent, was taken to Dover by the Border Force, with 14 people from Iranian, three Iraqis, and one Vietnamese.

Around the same time, a boat carrying 23 people was also intercepted in the Channel, with those on board saying they were both Iranian and Ethiopian, the department added.

Two separate groups, who said they were from Iran, Iraq and Turkey, made it to beaches in East Sussex without being detected at sea, but were later detained and transferred to immigration officials.

A Home Office spokesman said: “We are working closely at all levels with the French authorities to tackle this dangerous and illegal activity.”

Yet a flotilla of dinghies carrying almost 100 migrants made it to British waters yesterday, including one small boat that landed with 19 people on board.

At Greatstone beach, in Littlestone, Kent, the Border Force detained 19 people who managed to land after crossing the Channel.

Holiday park worker Stewart Ide spotted the refugees landing at the beach just before 11am yesterday.

He rang police as he ran to meet the boat, which contained people who said they were Kurds coming from Iran, Iraq and Turkey.

The dad-of-three spotted the dinghy from his beach-side office and ran nearly a mile to the beach to assist them with a colleague.

“I called the police as I ran down to the beach and found them freezing, scared and hungry.

“I hugged one man and said ‘welcome to England.’”

Stewart said he saw a navy vessel yesterday morning and was shocked it did not spot their arrival.

A further nine people who landed on Pett Level Beach, near Winchelsea, East Sussex, were medically assessed and interviewed, said the Home Office.