Hundreds of people face immediate evictions in Calais and Dunkirk. 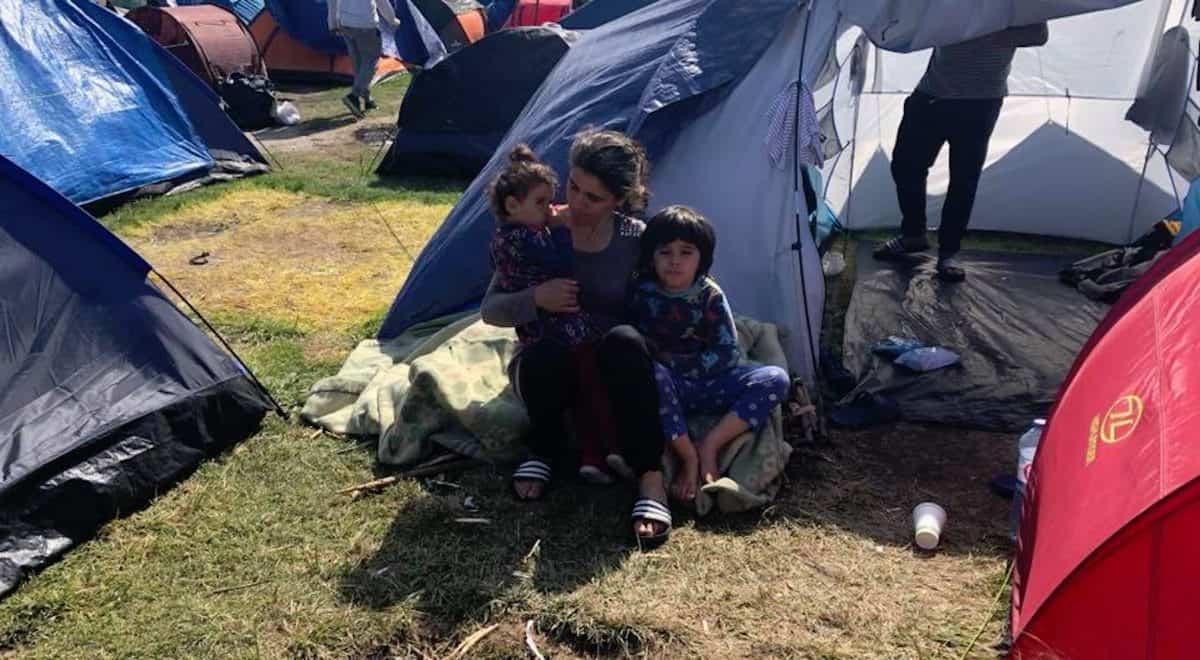 We have just been alerted that French authorities intend to evict and disperse hundreds of refugees in Northern France. I will explain what that will mean.

We can only surmise that these actions are the result of a political need to “take action” following Priti Patel’s visit to France last week to meet with her French counterpart. Our government believes the UK is facing a national “crisis” – 1000 migrants have crossed the Channel in boats this year.

On Thursday, the French authorities are expected to shut the gym (main picture and below) in Dunkirk where approximately 600 people, including many families, have been living for the last eight months. People will be put on buses for reception centres around France but, as with every similar event before, they will shortly return to sleep rough in the surrounding area.

This gym was not designed to provide sleeping for 200 people inside and 400 outside, or toilets and showers for 600 people in total. But it’s still a lot better than the alternative of just sleeping rough.

We have also been told to expect a major clearance in Calais tomorrow, with the biggest site in Calais expected to be fenced off, 500 people arrested and/or bussed out and tents and possessions confiscated or destroyed.

This strategy of continual forced evictions has been followed for many years now – certainly enough to clearly demonstrate it is a pointless exercise.

Evictions have no effect on the underlying issues that cause people to risk their lives on dangerous journeys to the UK. Even the major destruction of the Calais Jungle in October 2016 did not change this.

What WILL happen is that some of the most vulnerable people in society – people who are already severely traumatised, who don’t have the protection of the law, people who have done nothing wrong but are desperate to protect their families and have the audacity to ask for our help – will be further abused and sacrificed so that a bureaucrat can say they have done their job.

They think this will solve the refugee “problem” in Calais – but they have been doing the same thing for ten years now and nothing has changed.

This week we talked to the people who live there. I met a group of young boys, all around 17 to 21 years of age. They were pretty new to the jungle so they had heard of the possible clearance but were unsure what to do or where they could possibly go.

They were sat around a small fire drying their clothes from the recent rainfall. They greeted us warmly and apologised for not being able to offer us tea. They just didn’t have any. There little area was spotlessly clean and tidy.

The boys were from Sudan, from Darfur, they listened to what we had to say and thanked us.

”We will just wait here, we will be ok”

We didn’t want to frighten the boys but they needed to know the police were serious about dismantling the settlement and making it difficult for people to return. Their faces turned sombre and worried eyes were cast down. Feet shuffled in the dirt. A twig was twisted in the sand.

Four young boys sat around a tiny fire, struggling to find food and stay dry. Now I had told them their home was likely to be destroyed in the morning. Despair was almost tangible.

What they have suffered so far to get here I didn’t ask.

They were having enough trouble holding it together.

We sat with them in silence for some minutes. Then one stood up and started to dismantle his shelter.

We left them silently packing up their worldly possessions for an unpredictable night outside and a very uncertain future.

Four 17 year old boys – if you had sons that age how would you feel if this was them?

With these major evictions the need for sleeping bags and tents will be higher than ever before. If you can collect or donate these please do get in touch with www.care4calais.org, www.facebook.com/care4calais/ for updates, or take them to your nearest drop off point: https://care4calais.org/thedropoffmap/. If you can help by donating please do so here: https://bit.ly/2NI79r3.