US President Donald Trump visited a church to pose for photos while holding a bible. 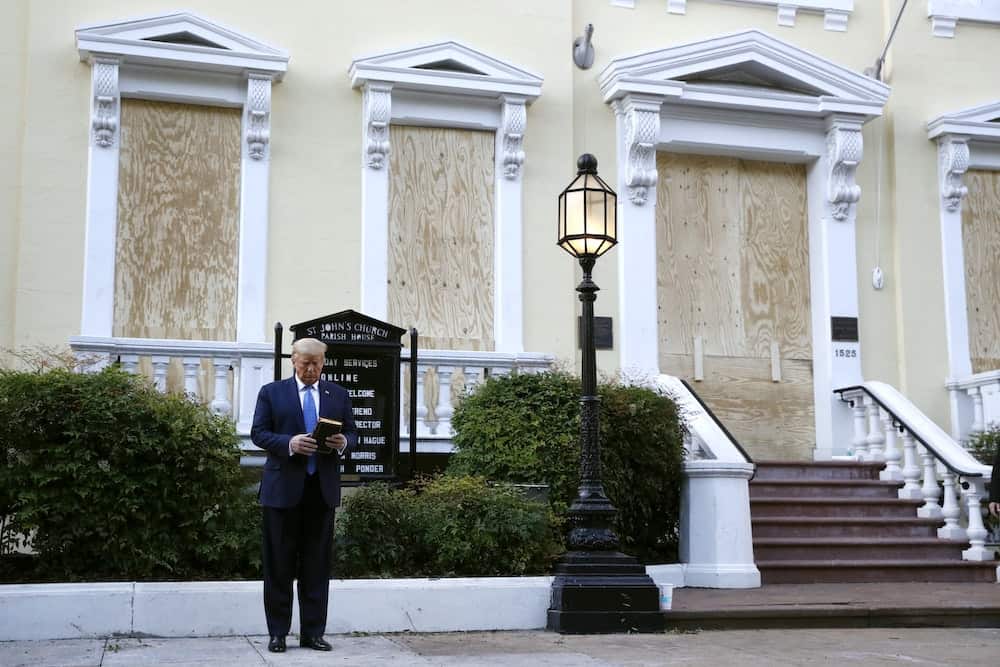 A bishop in the US has said she is “outraged” after tear gas was used to clear protesters ahead of President Donald Trump visiting a church to pose for photos while holding a bible.

Thousands of protesters had gathered at Lafayette Park by the White House in Washington DC on Monday as part of demonstrations over the death of African American George Floyd in police custody.

Shortly before Mr Trump made an address to the nation, police officers dispersed the peaceful crowd, firing tear gas and using flash bangs.

After the president had used his speech to threaten to deploy the military if US state governors did not stop ongoing protests across the country, he walked from the White House to the nearby St John’s Episcopal Church.

At the church, which had been damaged by protesters on Sunday night, Mr Trump held up a bible and gathered a group of advisers to pose for photos.

He did not comment on Mr Floyd, the church or the clearing of the protesters.

The Rt Rev Mariann Budde, bishop of the Episcopal Diocese of Washington, to which St John’s belongs, said she was “outraged” by Mr Trump’s actions and said the president did not pray during his visit.

She said: “He took the symbols sacred to our tradition and stood in front of a house of prayer in full expectation that would be a celebratory moment.”

The bishop added: “There was nothing I could do but speak out against that.”

Speaking to American broadcaster CNN, she also said: “Let me be clear, the president just used a bible, and one of the churches of my diocese, without permission, as a backdrop for a message antithetical to the teachings of Jesus and everything that our churches stand for.”

She added: “He sanctioned the use of tear gas by police officers in riot gear to clear the churchyard. I am outraged.”

The US has been hit by six days of unrest following the death of Mr Floyd in Minneapolis, with curfews now imposed in New York City and Los Angeles as people protest over the police killings of black people.

The director of strategic communications for Mr Trump’s 2020 re-election campaign defended the clearing of the protesters so the president could visit the church and accused the BBC of bias.

Asked on BBC Radio 4’s Today programme if it was right protesters were forcibly cleared so the president could hold up a bible as a prop, Marc Lotter said: “I understand that’s the liberal point of view, that’s your biased point of view.

“But what I’ll tell you is that the very night before that, people standing in that exact same park set a historic church on fire – that was not a peaceful protest.

“And so it’s absolutely the appropriate act of the United States Secret Service and the police to create a perimeter around the White House to make sure that there’s security, that we’re not having our national historic sites set on fire.”

Mr Lotter said that as a curfew was being imposed on Washington DC, the protesters were being moved further away.

He added: “It’s not unusual to move protesters or to move groups of folks away from our elected leaders even in times where we’re not facing these kinds of things.

“So that was the appropriate move to start to dissipate those crowds to start to reduce the likelihood that there was going to be further damage, violence, rioters.”

Archbishop of York Dr John Sentamu said he would like to join protests over the death of Mr Floyd and criticised Mr Lotter.

Dr Sentamu told Today: “I’m at the moment self-shielding. I certainly would want to join but the moment that turns into violence I won’t be there because I don’t believe violence is the same as going out and protesting.”

Asked about Mr Lotter’s earlier words and the president’s threat to deploy the army, Dr Sentamu said: “I listened to his campaign manager earlier on and it just left me cold, people somehow think that because you’ve got the power and authority, you can abuse that authority.

“Hate cannot drive out hate, only love can do that. And the problem is America has not been listening to the real problems of African Americans and any what they call people of colour.”

Downing Street repeated its call for peaceful protests to be allowed.

Asked whether Boris Johnson thought the solution might be sending in the army, the spokesman said: “Those sorts of questions are obviously a matter for the authorities in the US.

“The scenes which we are seeing are very alarming and people must be allowed to protest peacefully.”