★★★★☆ There is such a thing as too famous. Elvis Presley, king of rock ‘n’ roll, was too famous. In Baz Luhrmann’s excellent new film, the life of the 20th century icon of American culture and music is viewed through the eyes of unreliable narrator, the so-called “Colonel” Tom Parker (Tom Hanks). A former conman […] 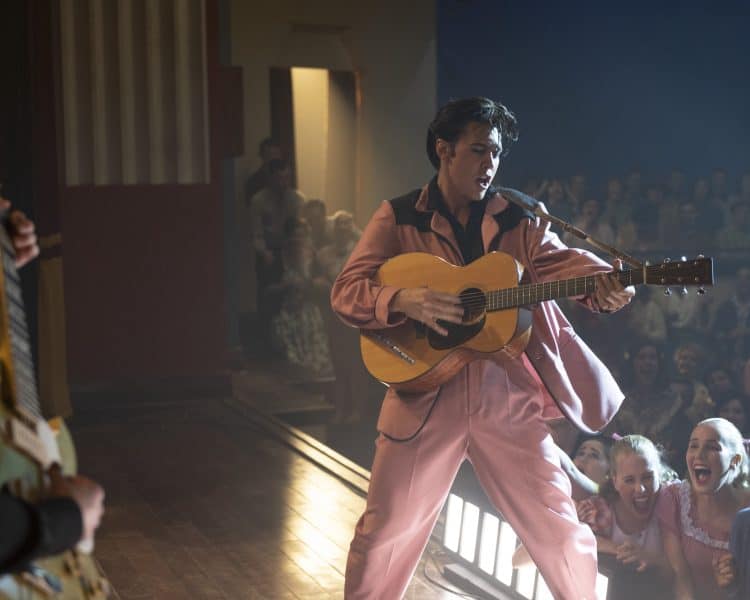 There is such a thing as too famous. Elvis Presley, king of rock ‘n’ roll, was too famous. In Baz Luhrmann’s excellent new film, the life of the 20th century icon of American culture and music is viewed through the eyes of unreliable narrator, the so-called “Colonel” Tom Parker (Tom Hanks). A former conman and freak show operator turned music promoter, this thoroughly mysterious chap singlehandedly turned the unknown Elvis into the biggest music star on the planet.

Elvis (2022) is everything you expect from a Baz Luhrmann picture. The cinematography is gorgeous, the production design sumptuous and immersive, the editing all fizzy pop energy. Elvis is brash, often thunderously loud, always busy, emphatically anachronistic in its use of modern tunes, melodramatic and glorious every step of the way. The Australian auteur knows how to put on a show, Elvis’ life resembling the structure of one long epic party. There’s sex, booze and drugs, the feeling you don’t want the night to end. But after the run of euphoria is the dissociative comedown and the broken bottles to clean up. Elvis becomes so tired, he can no longer stand when performing. Bloated, drug-addled, depressed, he’s given up and tells Priscilla, his long-suffering wife: “I’m all out of dreams.”

Austin Butler is electrifying as Elvis. If Luhrmann chose to forgo hiring an actor with a vague similarity to Presley, Butler certainly does a commendable job capturing the legend’s energy during live performances and his quintessential southern charm and charisma. From his early days creating a moral panic due to his sexualised hip swaying to his final years as a sad and overweight mess, Butler brilliantly evokes what made Elvis a captivating presence. The recreation of the Suspicious Minds number, during his Vegas residency years, is a standout sequence, Butler sweating and gyrating and punching the air, disappearing so deeply into character the hairs on your neck will stand up.

Tom Hanks too is no slouch. Under heavy prosthetics, sporting a false nose and peculiar European accent, his role as Tom Parker is easily the most singular performance the avuncular American star has ever delivered. Parker was neither a colonel nor American, but a Netherlands-born fraudster who ripped off Elvis for millions. Their relationship, which Luhrmann has described as symbiotic, forms the heart of the picture. The thesis the director presents is this: they needed each other as much as they didn’t like each other. Hanks depicts Parker as controlling, manipulative and vampire-like in some scenes, bleeding Elvis dry, making backroom deals to benefit himself and less so the man who made him his millions. Elvis wasn’t thick, but he was too trusting, Parker an expert grifter.

Luhrmann’s film hits the right notes all the way. It shows the man behind the myth, the fragile person in the sequined jumpsuit and cape. A lonely soul who never got over the death of his beloved mother, when he’s not on stage he’s a living ghost, a man who doesn’t seem to know what to do with himself. There is such a thing as too famous.