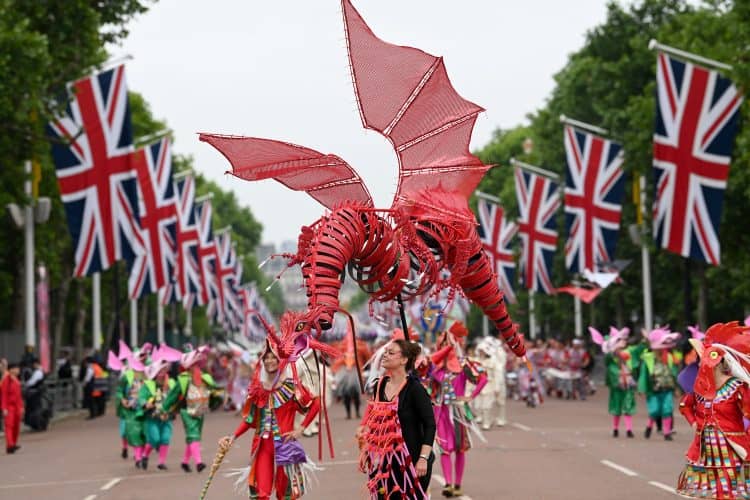 The organisers of the Platinum Jubilee Pageant have scrambled to issue an apology after viewers spied a symbol associated with Nazis on a display during Sunday’s parade.

A float supposed to represent the Northern Soul movement of the 1960s featured an image of the ‘Black Sun’ symbol – a black and silver wheel with a dozen jagged lines.

The logo was reportedly used by the SS in Nazi Germany – and has since been employed by neo-Nazis in place of the Swastika.

Unsurprisingly, social media users spotted the symbol’s odd inclusion – and questioned how it ended up being used to represent Northern Soul.

One person asked: “Why the f**k is the Black Sun, a nazi symbol, on a Jubilee float?”

Another said: “Absolutely nothing at all to see here, just a Nazi symbol on the side of one of the Jubilee parade buses…”

A third added: “Can some please explain to me why there was a Nazi symbol (black sun) on a float in the jubilee.”

And in a statement given to The Mirror, The Platinum Jubilee Pageant Company apologised. It said: “This is a genuine mistake and we apologise for the offence caused. The act intended to represent the Twisted Wheel Club associated with Northern Soul music from 60s and 70s, and the symbol was unfortunately mislabeled on search engines.

“This is an error with no malicious intent. Anyone who has seen the Pageant will know that the Pageant is all about inclusivity, tolerance and unity and this symbol does not correlate with anything it stands for.”