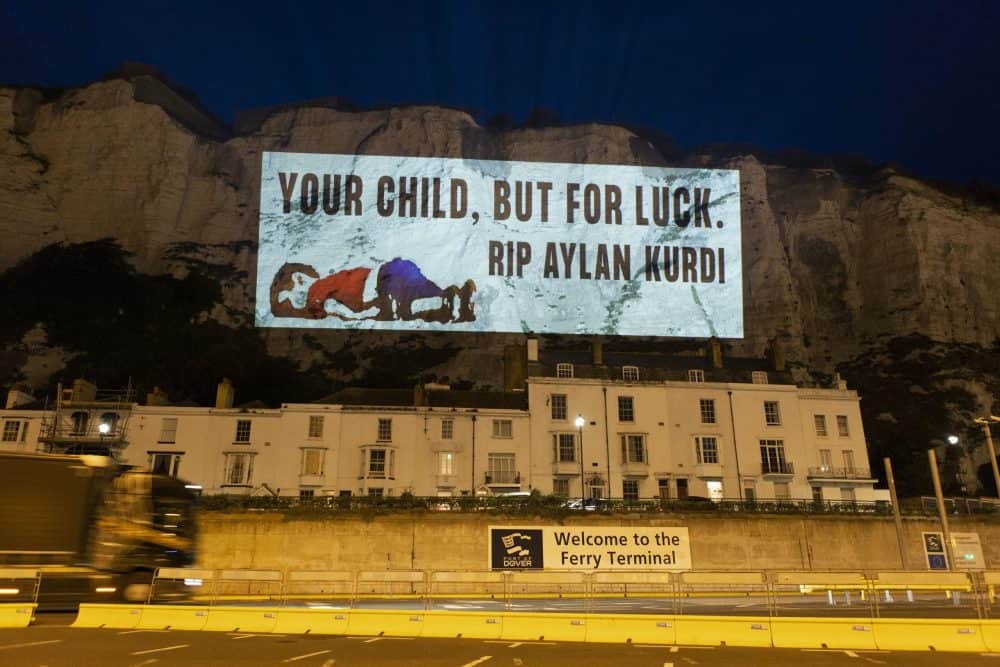 The words “Rise above fear. Refugees welcome” have been beamed onto the White Cliffs of Dover ahead of planned protests on Saturday.

The iconic Kent landmark was lit up with a series of massive projections in support of migrant welfare.

The messages included “These cliffs mean hope” and tributes to Syrian boy Alan Kurdi on the fifth anniversary of his tragic death.

The spectacle lit up the cliffside on Friday night and was organised by humanitarian charity Freedom From Torture.

Sonya Sceats, Chief Executive of Freedom from Torture, said: “The government thinks that by stoking fear about the Channel crossings it can distract us from its political blunders and get away with plans to dismantle our civil liberties.

“But the hatred it has fomented for political ends is getting out of control.”

A heavy police presence in the town is anticipated given the levels of disorder in the past.

Both pro and anti-immigration activists have announced their intention to gather in the Kent port, despite a plea from local MP Natalie Elphicke to “stay away”.

Meanwhile, a demonstrator who goes by the name The Little Veteran on social media is calling on people to “shut the port down for days” in protest against migrant crossings.

In a video posted on YouTube, he called for a peaceful demonstration, asking people to drive slowly along roads and block harbour entrances with boats.

Anti-racist group Hope Not Hate has raised concerns there will be violence and that splintered elements of the British far-right may also travel to Dover.