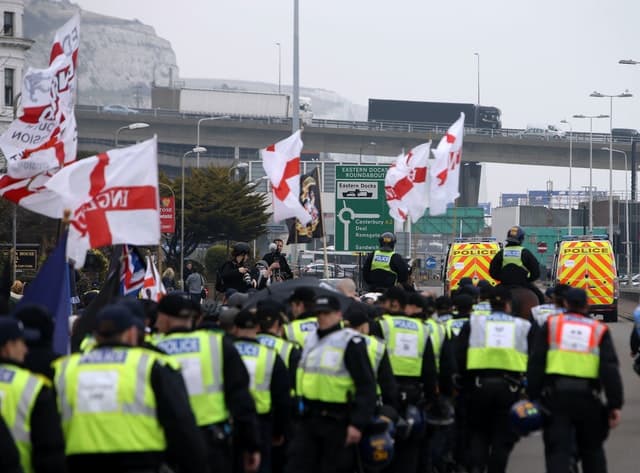 Police officers march with far-right protesters though Dover in Kent as they demonstrate against the arrival of immigrants in 2016 Credit;PA

There are fears of violence in Dover as rival groups are expected to assemble to demonstrate over migrant crossings.

Protesters are set to gather in the town on Saturday amid a heavy police presence.

Both pro- and anti-immigration activists have announced their intention to gather in the Kent port, despite a plea from local MP Natalie Elphicke to “stay away”.

Anti-racist group Hope Not Hate has raised concerns there will be violence and that splintered elements of the British far-right may travel to Dover.

The Kent town saw ugly clashes in 2016 when rival protest groups assembled to demonstrate over immigration.

The group said: “Kent Anti Racism Network is a collective of people from all political and organising backgrounds with one common goal: to combat racism and racists in our community.

“This weekend symbolises this struggle, and we encourage all good people in the local community to come down and stand with us in support of those arriving on our shores, in the way that Kent did so proudly when welcoming refugees after World War 2.”

Meanwhile a demonstrator who goes by the name The Little Veteran on social media is calling on people to “shut the port down for days” in protest against migrant crossings.

In a video posted on YouTube, he distanced himself from other groups who may come to the port and called for a peaceful demonstration.

Instead he called on people to drive slowly along roads and block harbour entrances with boats.

Concerns have been raised by anti-racist group Hope Not Hate that far-right groups will make the trip to Dover on Saturday.

Dr Joe Mulhall, head of research at Hope Not Hate, said there had been a build-up of anger among the far-right as migrant crossings have continued.

He said: “It’s one that has a potential for popular support so a lot of the grifters on the far-right are not going to let an opportunity like this go by.

“There’s a danger that there will be violence, Dover has a history of that.”

Protests in the town in 2016 were marred by violence while two coaches at a nearby service station had swastikas painted on them in blood.

Dr Mulhall said the anti-racist protest in Market Square could be a “possible flashpoint” for tensions.

However he says Hope Not Hate are “less fearful” than they were a few days ago, with some far-right elements not expected to make the trip.

Police are still trying to establish how many people are going to be involved in protests and have announced a “significantly increased” police presence will be in place.

“Anyone planning to visit Dover with the intention of committing offences should be aware they are not welcome here and that we will seek to prosecute anyone who breaks the law.

“The public should be assured that we have a great deal of experience dealing with protests and will use officers specially trained to deal with events of this nature.”

Dover MP Natalie Elphicke has urged people to stay away from the protests given the backdrop of the Covid-19 pandemic.

She said: “People are rightly angry about the number of people breaking into Britain in small boats. It is completely unacceptable.

“But a protest in Dover in the middle of a pandemic is not a sensible or responsible thing to do. We cannot risk a second wave – protesters should stay away from Dover this weekend.