“Complete devastation, courtesy of the Environment Agency. Scorched earth work the Russian Army would be proud of! 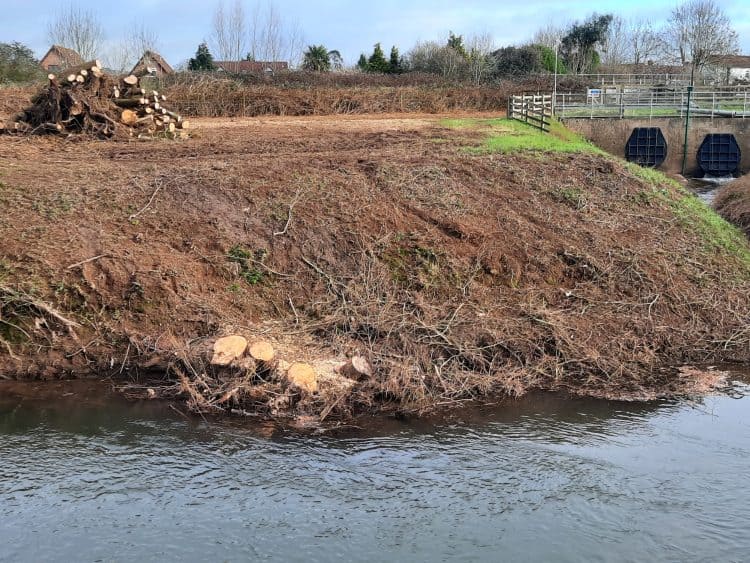 Anglers are “heartbroken” after a 250-metre stretch of the River Tone in Somerset was stripped of trees by the Environment Agency as part of flood management measures.

The semi-wild section of river running through Taunton was a favourite spot for anglers and famous for its wildlife, particularly kingfishers.

But after work in the last week, the banks of the river are now just bare earth, with the majority of trees felled.

Dominic Garnett, 42, an angling guide and coach, has fished the stretch of the river for the past 20 years and has been visiting it since childhood.

“It was a semi-wild stretch of river and they have channelised it,” he told the PA news agency.

“It is absolutely heartbreaking to see the destruction of the places you love – you go there to be with nature and to get away and it’s all just been ripped away. We are just smashing it all up.”

The length of the river ran through marshland until the 1990s, when the surrounding land was tarmacked to make way for a leisure and shopping complex and for housing.

Mr Garnett said the area is prone to flooding.

Woodland planting is often touted as a key flood mitigation strategy, but Mr Garnett said representatives of the Environment Agency had told him the trees had been felled “because they make the water back up”.

He added: “It is like they have taken an old hippie and given him a buzz cut – it is scorched earth tactics.

“When are we going to start putting nature first? We always mess around with it. It is always very short-term and later on it is always nature that pays the price.”

He pointed out that huge swathes of trees had been cleared only weeks away from nesting season, with river plants dredged out when some species of fish are starting to spawn.

“It makes them vulnerable to predators – fish need places to hide,” he said.

Mark Barrow, a film-maker who has specialised in productions about the freshwater species in the UK’s rivers and lakes for the past 20 years, tweeted: “Shocked to find this today on the River Tone.

“Complete devastation, courtesy of the Environment Agency. Scorched earth work the Russian Army would be proud of!

“Those stumps were decades old trees where I used to watch the local kingfisher. Everything is now disappearing.”

When the complex was originally built a large lake was created, in part, according to Mr Garnett, to “appease” locals angered by the loss of the marshland.

But he says that due to a lack of maintenance, the lake, which could have helped flood control efforts, is now silted up and only two or three inches deep in places.

Dr Nick Chappell, an expert in the hydrological processes associated with nature-based solutions at the University of Lancaster, explained that while so-called “green infrastructure” can be used to mitigate flood risk successfully, it has to be done on the same scale as an engineering project.

“Natural solutions are not magic, you have to do enough, and of course there are co-benefits in terms of water quality, carbon sequestration and biodiversity, but you need to do them on the same scale as traditional infrastructure schemes,” he said.

However in many other areas, green infrastructure may replace or complement some of the hard engineering.

He added that as well as delivering reductions in flood risk, it is important that the Environment Agency explains to locals why particular works are undertaken.

A spokeswoman for the Environment Agency said: “Essential work to manage flood risk and protect properties in Bathpool and the upstream town of Taunton is ongoing.

“We always work to minimise any impact to the environment when carrying out work and have measures in place to compensate, such as new tree planting

“Flooding and coastal erosion can have terrible consequences for people, businesses and the environment.

It is understood the trees at water level were deemed to be creating a flood risk by catching debris and restricting the flow of water.

The area is due to be sown with a wild flower seed mix and replanted with native trees.