Labour unveils a bold vision for the UK. 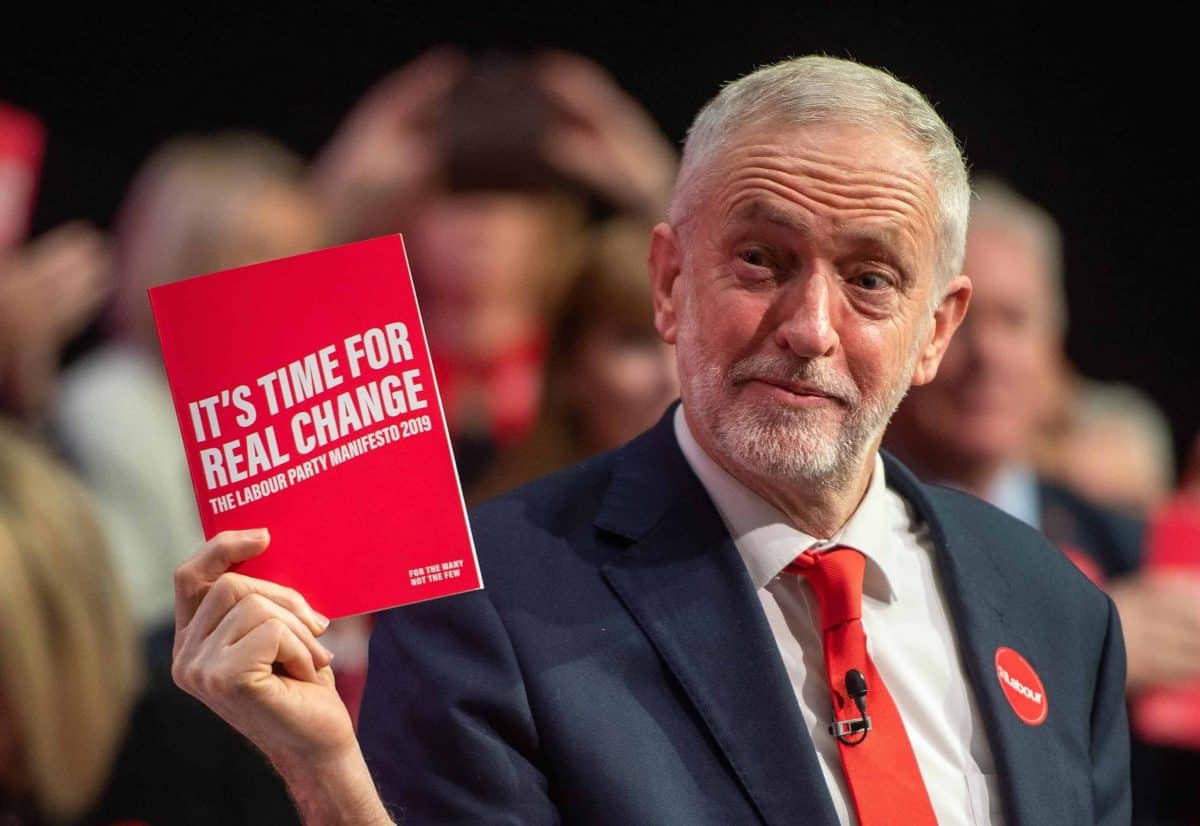 Labour leader Jeremy Corbyn has laid out his vision for government during a half-hour speech in Birmingham.

The manifesto, titled It’s time For Real Change, depicts what Mr Corbyn called the “most radical and ambitious plan to transform our country in decades”.

The 105-page document contains a host of already-announced policy proposals, along with a smattering of debut measures.

The Labour Party manifesto at a glance

Jeremy Corbyn vows to re-negotiate a new withdrawal agreement with the European Union by March and put his deal to a public vote within six months of the election.

The referendum would be “legally binding” and implemented “immediately”.

The hefty list of proposals does not commit to keeping free movement, even if the public voted to Remain, simply acknowledging the benefits of immigration.

Rail, mail, water and energy will all be brought back into public ownership like in many European countries, while delivering full-fibre broadband, via a publicly owned company, free to everyone in the country.

A commitment has been made to introduce a “real living wage” of at least £10-an-hour while ending zero hours contracts and strengthening trade union rights.

In a move which would be popular parents – and children, Ofsted and SATS tests at Key Stage 1 and 2 would be scrapped, while power over the running of schools would be returned to councils and head teachers, rather than academy bosses.

Labour has promised to re-invest in technical training.

For early years, the party has pledged to provide 30 hours of free childcare to all pre-school aged youngsters and has guaranteed a Sure Start centre in every community.

In higher education, the 2017 vow to get rid of university tuition fees is back and maintenance grants would be returned but there was no mention of clearing graduate debt.

The leadership has set out proposals for a so-called “green industrial revolution” that is designed to create one million jobs in the UK, with the aim of shifting industry, home gas and electricity, transport, agriculture and construction onto renewable energy modes. There would be a windfall tax on oil companies to pay for many measures as part of plans for a low-carbon, green economy.

The manifesto stops short, however, of signing up to the motion passed at the party conference of establishing a net-zero carbon economy by 2030.

Instead, it states a Labour government would “aim to achieve the substantial majority of our emissions reductions” by that target date.

Unpopular Tory policies linked with horrific increases in poverty over the past decade, especially working poverty, will be scrapped. Universal Credit, the two-child limit for benefits and the welfare cap would all be for the cutting floor, if Labour wins power next month.

For women impacted by the change in pension age to 66, Labour has promised to review the retirement age “for physically arduous and stressful occupations”, with a focus on shift workers.

There would also be a royal commission established to look at de-criminalising drugs.

The NHS would see a 4.3% increase in its expenditure every year, with privatisation reversed.

Free annual dental care check-ups would be re-introduced, mental health services would receive £1.6 billion extra a year and free personal care for elderly people would be on offer.

Labour’s manifesto promised a “lifetime cap” on the amount people have to pay for social care.

A £1 billion fire safety fund would be introduced to fit sprinklers and other safety measures in council and housing association tower blocks to avoid a repeat of the Grenfell Tower tragedy.

Jeremy Corbyn vowed to take on the “rich and powerful” as he launched the Labour manifesto in Birmingham.

Jeremy Corbyn gave a breathless run through his party’s manifesto in 60 seconds.

Do Labour’s manifesto figures add up?

Labour has committed the government to paying for a lot more when it comes to scrapping university tuition fees, providing more cash for healthcare and funding free television licences for over-75s.

The pledges, according to the party’s own figures, are estimated to cost up to £83 billion.

Abolishing tuition fees and re-establishing maintenance grants alone would cost £13 billion, while rolling out free personal care for all over-65s would cost £10 billion.

The 4.3% annual budget rise for the NHS would see Labour spend a bit more than the Conservatives – 2.3% overall.

The Institute for Fiscal Studies (IFS) worked out that spending under a Jeremy Corbyn-led administration would increase NHS funding by an additional £3.2 billion in real terms over four years, reaching £143.5 billion in 2023/24.

– How will this be paid for?

According to shadow chancellor John McDonnell’s “grey book”, outlining how much each funding pledge will be funded, that investment will come from tax hikes on the wealthy and big businesses.

Other incentives, such as reversing Tory tax cuts, hammering down on tax evasion, and imposing VAT on private schools, would bring that pot up to the required £83 billion, according to Mr McDonnell’s workings. According to the party 95% of people will not pay any more tax.

– Investment in the UK economy

Labour has pledged to renationalise or introduce a publicly owned company in a host of sectors, including rail, mail, energy and internet broadband.

The grey book does not set out how these government takeovers would be funded, although the cost of acquiring BT Openreach, the company currently tasked with rolling out high-speed broadband across the UK, has previously been estimated at £20 billion.

The 105-page manifesto also pledges that a Labour administration would build 150,000 homes every year if elected, with 100,000 built by councils.

That investment is set to come out of the party’s £150 billion “social transformation fund” that would pay towards upgrades for schools and hospitals, as well as moving the investment arm of the Treasury to the north of England.

Much of the money would be allocated over a five-year period and half of the pot – £75 billion – would go towards paying for the proposed housebuilding boom.

The fund, according to Labour’s Treasury team, would be created by borrowing while interest rates are at an all-time low.

The leadership has set out proposals for a so-called “green industrial revolution” that is designed to create one million jobs and another 800,000 apprenticeships in the UK, with the aim of shifting industry, home gas and electricity, transport, agriculture and construction on to renewable energy modes.

That too would be paid for through borrowing, along with an £11 billion windfall tax on the oil and gas sector – a move only announced on Thursday.

A “green transformation fund”, worth £250 billion, would be focused on upgrading energy and transport networks to help Britain meet its tight decarbonisation targets.

The manifesto states a Labour government would “aim to achieve the substantial majority of emissions reductions” by 2030.

The green fund would include providing loans for people to buy electric cars, investment in wind farms and grants for home insulation.

The social and green transformation funds combined would take borrowing to an extra £55 billion per year, on top of the current Government levels of £47 billion of borrowing in 2019/20.

– The cost  of a Tory Brexit

Much of the cost is investment in the country however, and Labour promise to negotiate a Brexit deal that will wreak far less damage to the UK economy and jobs than Boris Johnson’s Withdrawal Deal.

Boris Johnson’s deal will leave the UK £70 billion worse off a year than if it remained in the EU, a leading economic think tank has warned, so if the Conservative Party manifesto is costed unlike their last one, that will be on top of an eye-watering £70 billion a year.

The National Institute of Economic and Social Research (NIESR) says the Prime Minister’s plan would shave nearly 4 per cent off of the economy by the end of the 2020s.

That is the equivalent of about £1,100 per person a year.