French fury was sparked after the Government in London announced last month that it had approved just 12 of the 47 applications it had received from French small boats. 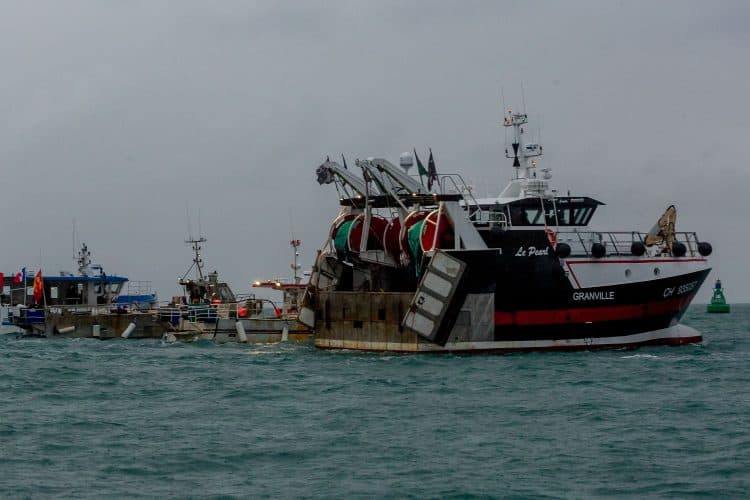 Just as you thought the plight of the UK couldn’t get any worse, there could be a blockade tomorrow.

French fishermen have set a deadline of tomorrow for the UK Government to sort out the quarrel over licenses or they will cause even more pain to British shores.

French fury was sparked after the Government in London announced last month that it had approved just 12 of the 47 applications it had received from French small boats.

Those denied licences were unable to prove a track record of fishing activity in the six-to-12 nautical mile zone in the years before the UK’s departure from the EU, according to a UK Government spokesman.

The spokesman added that the approach had been “fully in line” with the UK’s commitments in the Trade and Co-operation Agreement (TCA) agreed as part of the Brexit divorce deal.

The cross-Channel tensions over fishing have been long-running, with earlier rows leading to Navy ships being scrambled to Jersey amid concerns of a blockade of the island.

They have indicated they would blockade of Calais, Dunkirk and the Channel Tunnel which could halt the flow of goods across the Channel.

Laurent Merlin told the BBC: “We’ll create as much disruption as we can, by blocking the things Britain needs the most,” he said.

“We saw the [impact of the] gas shortage; we’ll try to create another shortage of something else. We’re ready to block everything: Calais, Dunkirk, the Channel Tunnel. We need this fishing licence and we’ll do anything to get it.”

Benoît Firmin, of the Hauts de France fishing committee, said that the planned action would be larger than any previous protest.

On the impact on Christmas supplies, he told the BBC: ”Already there’s a lack of food, petrol and staff (in the UK).

“Are we going to make things worse? Maybe, but there’s a lot of frustration among the community, so fair enough.”

Britain has “no God-given right” to rule the waves

Britain has “no God-given right” to rule the waves and we should stop “strutting our importance” across the world, a peer has claimed.

Lord Singh of Wimbledon said such an attitude belongs to the 19th century and only increases the risk of “serious conflict” in the present day.

Money earmarked for military ships should instead be diverted to fund social care, the independent crossbench peer added.

The Government dismissed Lord Singh’s remarks and insisted it has a duty to keep the nation safe and secure.

Speaking in the House of Lords during question time, Lord Singh said: “The less money we spend on ships, the more we have to spend on social care.

“Would the minister agree that despite what we hear on the Last Night of the Proms, Britain has no God-given right to rule the waves?

“Strutting our importance across the world was questionable but understandable in the 19th century, but today it simply encourages others to do the same with an increasing risk of serious conflict.”

Lord Singh was referring to Rule Britannia, a song associated with the Last Night of the Proms.

Questions have been raised over whether it should be used at the event, given some of its lyrics, which include: “Britons never, never, never shall be slaves.”

Responding for the Government, defence minister Baroness Goldie said: “What this Government has got is a fundamental democratic responsibility to keep this nation secure and safe, and to work with our allies and partners globally to contribute to a safer world.

“I have to say to (Lord Singh), with the greatest of respect, it is very difficult to do that with an inadequate defence capability and we have seen over decades what happens when our defence capability frankly drops below what is needed.

“I think it’s a matter of great commendation to the people of the United Kingdom, and to the very skilled people in these shipyards throughout the United Kingdom, that we are forging ahead with this imaginative, innovative, constructive, effective ship-building programme.”