The Prime Minister and other Cabinet ministers have hit back at Mr Welby for his intervention, but he defended the decision to address the immigration policy. 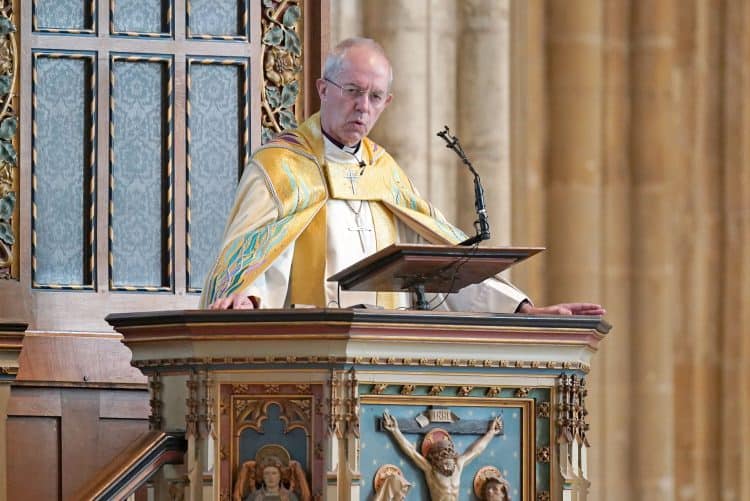 The Archbishop of Canterbury has said it would have been “cowardly” not to have spoken out against the plan to send failed asylum seekers to Rwanda.

The Rt Rev Justin Welby used his Easter sermon to criticise the UK Government’s intention to send people to East Africa in a bid to deter migrants from attempting to cross the English Channel to Britain in small boats.

In his Easter Sunday sermon in April, the head of the Church of England said there were “serious ethical questions about sending asylum seekers overseas”.

Mr Welby said “sub-contracting out our responsibilities, even to a country that seeks to do well, like Rwanda, is the opposite of the nature of God who himself took responsibility for our failures”.

The Prime Minister and other Cabinet ministers have hit back at Mr Welby for his intervention, but he defended the decision to address the immigration policy, which he said cannot “stand the judgment of God”, during his homily.

He told Channel 4 News: “On Maundy Thursday, which was three days before Easter, there was this announcement.

“I need to say something because it is the high-profile sermon of the year.

“I remember writing it – it was about six lines – and just wishing I didn’t have to.

“To have avoided those issues would have been cowardly.”

Boris Johnson, according to sources who attended a private meeting between the Prime Minister and Tory MPs after Easter, claimed the senior clergyman had “misconstrued the policy”.

The new immigration proposal will see selected adult asylum seekers who cross the Channel in small boats sent for processing to Rwanda, where they will have the right to apply to live.

Despite facing criticism for the remarks, Mr Welby has not shied away from commenting further this week on what has been happening in Government.

Following the publication of the Sue Gray report into lockdown-breaking parties in Downing Street, the archbishop said the country needed to “rediscover” good standards in public life.

Mr Welby said the senior civil servant’s review showed that “culture, behaviour and standards in public life” matter, in comments that have been criticised by Tory peer Lord Goldsmith.

Asked why he waded into the affair, the archbishop told Channel 4: “There is a very strong moral and ethical component to the discussion.”

He added: “The main point I was making, and it was carefully not personalised, is let’s look forward and say whatever happens with the Prime Minister or political figures is a matter for politicians, so it wasn’t commenting on that in any way at all.

“What it was saying is one of the things the Sue Gray report shows us is a need for a renewal of the default reactions within our institutions so that the default reaction when someone says the rules were x but we’ll do y is to say, ‘It would be lovely to do it but it is not a good idea’.

“It is a systematic problem in many institutions, including the Church of England.”