The windmill was constructed sometime between 1835 and 1850 and milled corn until 1925, when it was damaged by a storm and fell into disrepair. 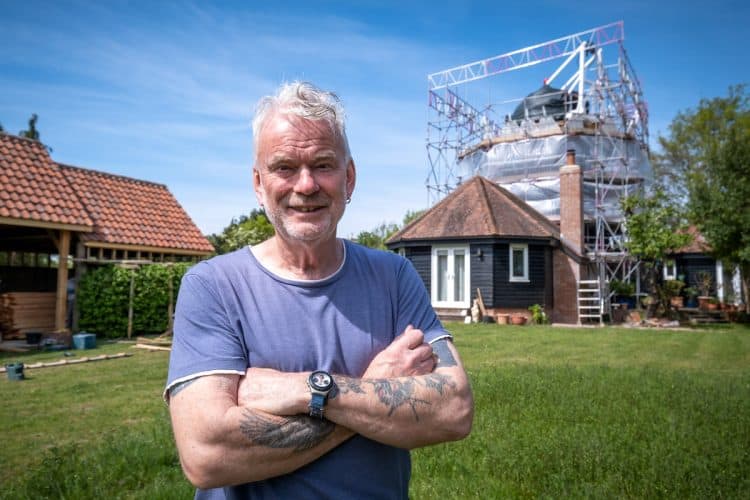 A villager is grinding out the energy bill crisis and generating his own electricity by restoring an 1830s WINDMILL – and he’ll even sell excess power back to the grid.

James Forsyth, 66, lives at a corn mill site in Cambridgeshire that has been defunct since 1925.

The retired boat builder is undertaking an ambitious project to restore a defunct windmill that he says will cut out his £200-a-month electricity bill.

James said the 40-foot (12-metre) windmill, which will use its sails to feed a generator on the top floor, will also produce enough electricity to sell back to energy firm Octopus.

He said: “It’s a huge project both financially and physically. This mill hasn’t turned for well over 100 years.

“Hopefully this will promote a more zero-carbon existence for others.”

James, who lives with wife Shell, 54, started the project after buying the three-bedroom mill in Swaffham Prior five years ago and hopes it will be functional by 2023.

He said: “We use around 30 kilowatts a day and our electricity bill was £178 last month.

“I think the windmill will easily cover that, with any surplus going to the National Grid.

“It’s not going to be huge amounts but it’s never been our idea to support the village or country in that way.

“If our house isn’t drawing from the grid then in some way it’s our contribution to getting the country to net zero [carbon] by 2050.

“It will take many, many years for us to get the money back but it’s not done for that reason.”

James has also signed up to benefit from a pioneering green energy scheme that is being trialed in his village.

The £12million project, which is partly funded by the government, will use ground source and air source heat pumps to provide thermal energy throughout the village.

Cambridgeshire County Council has said that 68 out of around 300 households in the village have registered for the scheme, which offers energy at variable and fixed rates depending on property size and usage.

James, from Devon, said that he expects to pay 9.7p per kilowatt under the scheme to heat his home, which he bought in 2019.

His windmill project, which began in late 2019, is now moving into its final stages after four years of work that were “difficult during the pandemic”.

James declined to reveal the total cost of the project, saying “it will take many, many years – if ever – to get the money back”.

He added: “Saving on bills is the icing on the cake but we’ve still had to buy the cake.”

James is now looking to weatherproof the building after adding its cap this week, which rotates to follow the wind direction.

Four sails – each measuring 25ft (7.5 metres) – are due to be fitted by the end of August, leaving just the generator to be installed on the top deck ahead of it being functional by 2023.

Other restoration work carried out has included replacing cladding and windows, and having a new wooden cap built to go on top of the windmill.

The windmill was constructed sometime between 1835 and 1850 and milled corn until 1925, when it was damaged by a storm and fell into disrepair.

During the Second World War, the cap was removed as it was believed that German planes used it as an aerial landmark to find bombing locations.

In the 1980s, English Heritage refurbished the mill “from the bricks up” to restore it to its original appearance.

James said: “In the 70s the mill was completely derelict. The windmill had been left to rot.

“English Heritage restored the windmill tower. They rebuilt it from the bricks up exactly as it was in the 1830s.

“If they didn’t do that we couldn’t put the cap on it now.”

James, who works part-time in property maintenance, is getting hands-on with the project and has enlisted help from friends.

He said the project cost could have run into triple-figures but – using his and wife Shell’s savings – has stayed below that.

James said: “If I didn’t have the skills that I have and friends to help it could be a six-figure sum for the windmill.

“For us this is fun, we enjoy working on things. It’s really my retirement project.”