Oh deary dear. Deary deary deary me. So it turns out that the bit of Theresa May’s car crash Conservative Party Conference keynote speech that wasn’t marred by being handed a P45, her constant miserable coughing or the new slogan she got in to replace “strong and stable” falling off the wall behind here letter […] 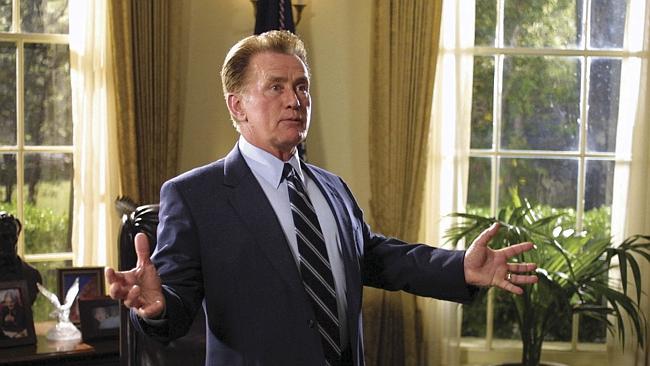 So it turns out that the bit of Theresa May’s car crash Conservative Party Conference keynote speech that wasn’t marred by being handed a P45, her constant miserable coughing or the new slogan she got in to replace “strong and stable” falling off the wall behind here letter by letter… well that uplifting, inspiring bit appears lifted of an uplifting, inspiring speech in hit political TV show The West Wing.

“There is no question of plagiarism, but if you are interested in the PM’s choice of US television shows, she is not interested in The West Wing … She prefers Friends,” a source told BreakingNews.ie.

Labour Deputy Leader Tom Watson spotted it too. In his blog he wrote: “It looks like she, or one of her speechwriters, is an Aaron Sorkin fan. Compare the (fictional) President Jed Bartlet with the (still real, just about) Prime Minister Theresa May.

Here’s Bartlet: “Every time we think we have measured our capacity to meet a challenge, we look up and we’re reminded that that capacity may well be limitless”.

And here’s May, in a line given to the media in advance of her speech: “And it is when tested the most that we reach deep within ourselves and find that our capacity to rise to the challenge before us may well be limitless”.

As Theresa May said during her first PMQs: remind you of anyone?

People have said a lot of things about our Prime Minister, but I don’t think even her strongest admirers would say she has a limitless capacity to rise to a challenge. Not since the election campaign, anyway.

The problem is that this isn’t the only example of plagiarism from the Conservative Party and the Prime Minister this week. Their whole policy agenda now consists of a series of low-quality bootleg versions of better Labour ideas.

Take the big announcements in her speech. A “rebirth” of council house building – we wait for the detail, but it sounds very like a policy from Labour’s manifesto. Action on energy prices – I’m old enough to remember when Ed Miliband announced that and got accused by the Tories of living in a “Marxist universe”. Stopping further rises in student fees – it’s pretty weak compared to Labour’s plan to scrap tuition fees, but at least the Tories have finally noticed the problem.

The Tories have realised Jeremy Corbyn is onto something, but they have no idea what to do about it. This time last year the Tories were laughing at him. Now they’re copying him.”

And it didn’t escape a certain Mr Miliband either. 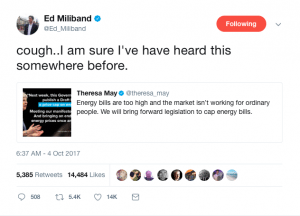 Theresa, I think you owe Ed an apology too now…