Why perform a menial task yourself, when there are dozens of helpers to do it for you? King Charles is fully into the swing of things... 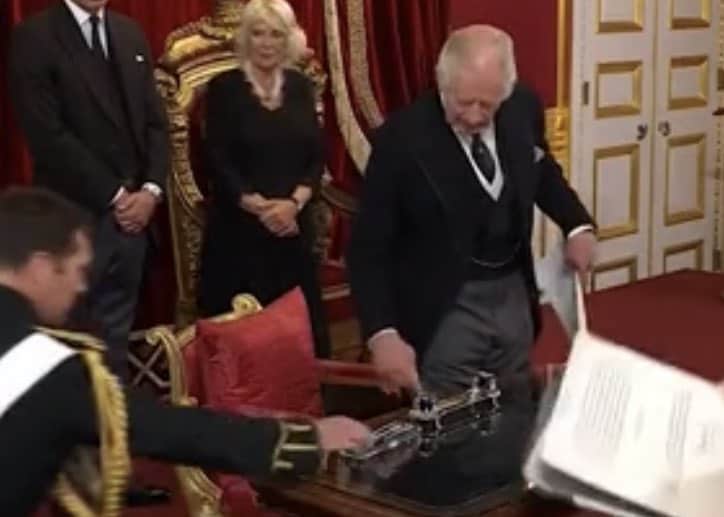 What’s the old saying… start as you mean to go on? King Charles – or, ‘the royal formerly known as Prince’ – has officially succeeded Elizabeth II as the ruling monarch of Britain, during a historic ceremony on Saturday.

With the sad news of Liz’s death breaking just two days ago, attention has now turned to the succession. Our new head of state will now rule as ‘King Charles III’, supported ably by his consort Camilla. The pair were given a taste of their new roles earlier today.

All seemed to be fine and dandy at the solemn event, and with pages and pages of royal proclamations to sign, King Charles needed plenty of room for manoeuvre. Unfortunately for him, a pen tray was sitting in the way – sparking an immediate reaction.

Rather than move the pen tray himself, like some sort of peasant, King Charles asked a nearby aid to move it. His gestures were frantic, as he twice flapped at the royal helper. Eventually, the item was moved to his satisfaction.

Are you not amused, your highness?

The job didn’t seem too laborious, though – and this pesky pen tray ended up just a few inches away from its original setting. Half-a-minute later, Charles III realised the folly of his request, and got to grips with the equipment itself, sliding it back into the centre.

Social media users have had a field day with the footage, suggesting that this behaviour is what we’ve come to expect from senior figures in the state-funded family. One account joked that King Charles ‘could not be expected to move things’.

Still, we’ll go easy on old Charlie boy – he has confirmed there will be a bank holiday on the official date of The Queen’s funeral. This will give the nation a real opportunity to mourn the beloved figure, without also being required to head into work.

WATCH: King Charles gets in a flap about items on his desk