The BBC presenter Victoria Derbyshire was quick to respond after the deputy PM called her impartiality into question. 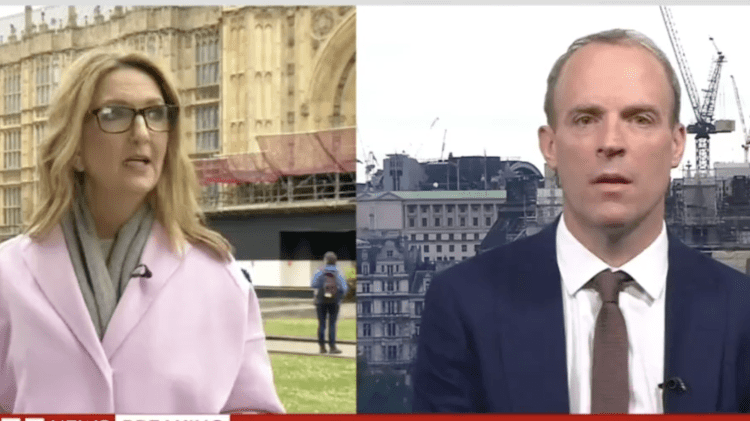 BBC’s Victoria Derbyshire slapped down accusations from Dominic Raab during an interview.

It comes as she also had to suffer an excruciating 80 seconds on camera, but more of that later.

Raab said to Derbyshire: “I think it’s easy to criticise from the luxury of being an armchair commentator or media commentator.”

Victoria said: “I’m just saying there are a lot of calls you didn’t get right. And if you were being honest with the voters, you might also mention the big calls where you made mistakes.”

Raab replied: “Well, Victoria. You’re [being] your usual partisan self about all of this, and that’s fine. But what I would say and the message and the feedback I get is that people recognise that we went through a pandemic the likes of which we’d never seen before.”

Victoria then hit back at his accusation of being “partisan”, adding: “Forgive me for pushing back on you, Mr Raab, but just because I ask questions you don’t like, it doesn’t mean I’m partisan.”

Derbyshire had just finished talking to the Work and Pensions minister Thérèse Coffey, who had been holding an umbrella for her.

Then anti-Brexit campaigner Steve Bray appeared, as he does, and made some comments at Coffey.

Derbyshire noted: “So, that’s Steve who you may actually remember through the whole Brexit referendum. Steve was a regular feature down here at College Green and I think me and Steve are on good relations so hopefully he won’t be too loud.”

Victoria then attempted to read something on her phone.

However, she then drops it before struggling to open it with the pin code. “Oh my gosh, I can’t remember my pin code. So annoying.”

Eventually, a fellow BBC reporter steps in to save her blushes.