"He using his own body to stop a tank. GOD BLESS THIS WAR HERO," wrote one person after watching the powerful clips of brave Ukrainians. 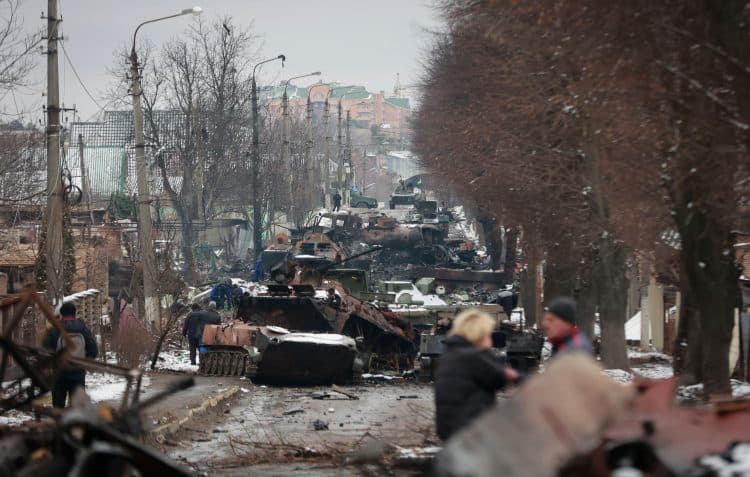 Brave and furious Ukrainians have been filmed screaming “invaders, killers” while blocking an army convoy as a Russian soldier fires warning shots in the air.

Videos shared on social media show citizens forming a human barricade in front of the advancing artillery, despite being completely unarmed and unprotected.

Footage has also emerged showing another group of fearless Ukrainians leaping on a Russian military vehicle while waving blue and yellow flags.

It comes as the UK’s defence secretary warned Vladimir Putin knows “no limit” and will use indiscriminate carpet bombing against Ukrainian cities as his forces close in on the capital Kyiv.

Ben Wallace said the leadership of the Russian military was “ruthless” and was prepared to lay siege to Ukraine’s population centres.

Mr Wallace told Sky News that meant a plan to “carpet-bomb cities, indiscriminately in some cases” and on BBC Radio 4’s Today he warned they would “pummel these cities with artillery and then hope to break the city”.

He told the BBC that siege tactics were in the Russian military doctrine, with forces surrounding a city before they “bombard it indiscriminately and then eventually close in on a population that they hope to have broken, and indeed take over what’s left of the city”.

“We’ve seen that in Chechnya before,” he said.