Watch: Tommy Robinson fined for contempt of court as video of him asking for money emerges

In June, Robinson appeared at the High Court to be questioned over his finances at the postponed hearing, where he told the court that, in a two-year period prior to declaring bankruptcy, he spent around £100,000 on gambling – largely in casinos. 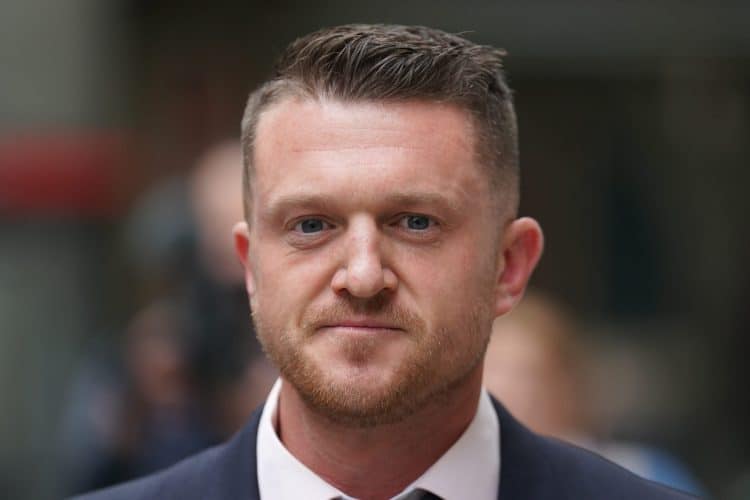 Tommy Robinson has been fined £900 for failing to turn up at a High Court hearing to be questioned about his finances.

Robinson, whose real name is Stephen Yaxley-Lennon, had been expected at a hearing in March over an unpaid legal bill after he lost a libel case brought against him by a Syrian teenager last year.

Jamal Hijazi successfully sued Robinson after the then-schoolboy was assaulted at Almondbury Community School in Huddersfield, West Yorkshire, in October 2018.

After the incident went viral, Robinson made false claims, including about Mr Hijazi attacking girls in his school, leading to the libel case.

Following a pre-trial hearing in November 2020, the English Defence League founder was ordered to pay more than £43,000 in legal costs.

Earlier this year, Mr Hijazi’s lawyers successfully applied for an order requiring Robinson to return to court to answer questions about his finances on March 22, but the 39-year-old failed to attend.

He was summonsed to court to face contempt proceedings in April and, at hearing on Monday, was handed a £900 penalty after admitting being in contempt of court.

He added that Robinson now has 14 days to pay and could be liable to serve 28 days in prison if he fails to do so.

The High Court was previously told that Robinson was facing mental health issues at the time of the March hearing, which he claimed were a result of being harassed.

However, on Monday, Mr Justice Nicklin said: “Whatever psychiatric issues Mr Lennon had, they did not prevent him from coming to the hearing that he failed to turn up at.”

The judge later said Robinson had recently published a video asking for support, including the words “Don’t let them lock Tommy up again” and “Keep him free of the clutches of the corrupt establishment”.

Mr Justice Nicklin said he had decided to fine Robinson prior to seeing the video and that “it was never serious enough to justify a period of imprisonment”.

The High Court judge also noted that Robinson had legal aid for his barrister for Monday’s hearing, adding: “He was in no need for donations for his representation today, the state was paying for it.”

In June, Robinson appeared at the High Court to be questioned over his finances at the postponed hearing, where he told the court that, in a two-year period prior to declaring bankruptcy, he spent around £100,000 on gambling – largely in casinos.

He was sentenced to 13 months in jail after being found in contempt of court on the day of the broadcast but served just two months before being freed after that finding of contempt was overturned by the Court of Appeal in August 2018.

The case was then referred back to the Attorney General and he was jailed again in July 2019.

Following Mr Hijazi’s successful libel claim, Mr Justice Nicklin ordered Robinson to pay him damages of £100,000 and his legal costs, thought to be around £500,000.

Related: Huge sum squandered by Tommy Robinson on gambling while getting supporter donations revealed in court