"Labour’s Kier Starmer and David Lammy using the Holocaust memorial as a backdrop for their party political video. This is a massive faux pas in Germany." 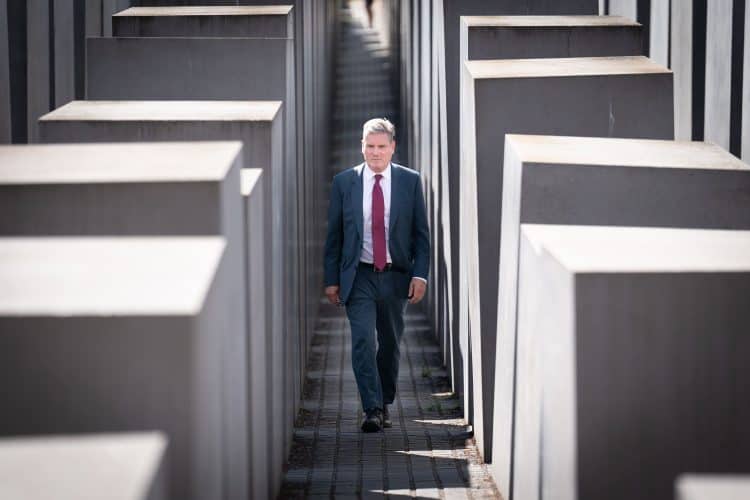 Sir Keir Starmer has rejected accusations that he used a visit to Berlin’s Holocaust Memorial for political campaigning purposes.

The Labour leader said the tour was part of his duty as a political leader to prevent such atrocities from happening again, after he was criticised for using the memorial as a backdrop for a promotional video that does not mention the Holocaust.

He said: “I think going to a memorial like that is very important for senior politicians.

“We have a duty not just to look back and remember and learn – of course we’ve got that duty.

“But we have the duty now to make sure that we never get into a situation where that could possibly happen again.

“So I think it’s very, very important that I went to that memorial.

“I’m very glad I did and I found it very, very moving.”

James Jackson tweeted: “Labour’s Kier Starmer and David Lammy using the Holocaust memorial as a backdrop for their party political video This is a massive faux pas in Germany.”

During a two-day trip to the German capital, Sir Keir and shadow foreign secretary David Lammy took a guided tour of the Memorial To The Murdered Jews Of Europe.

They are seen walking between the structure’s concrete slabs in the video, which focuses on Labour’s hopes to draw inspiration from German Chancellor Olaf Scholz’s Social Democrat Party.

The Campaign Against Antisemitism accused Sir Keir of “exploiting” a visit to the memorial for campaigning purposes, calling the move as “manipulative and repulsive”.

Joe Glasman, the organisation’s head of political and government investigations, said: “It is a matter of decency and long-established convention in Germany that you never stoop to using the Berlin Holocaust Memorial as some kind of a prop”.

“But to incorporate the Memorial as the backdrop for a political clip that does not even mention the Holocaust is an insult”.

He visited the Holocaust memorial and spoke about it at the time.

“This attack is not only wrong, but completely disingenuous and deeply unfair.

“And attempts to politicise something that simply shouldn’t be”.

Speaking to reporters at a central London bank on Monday, the Labour leader described it as an “extraordinary” memorial that “forces you to think and think again about all the murdered Jews in Europe”, as well as the “shared determination that we have as leaders now to make sure that that should never ever be repeated”.

It came after he met young entrepreneurs and business leaders taking part in a NatWest accelerator programme to discuss their challenges and required support from Government.