One protestor said: “We have opened the building to house Ukrainian refugees and refugees from all nations.” 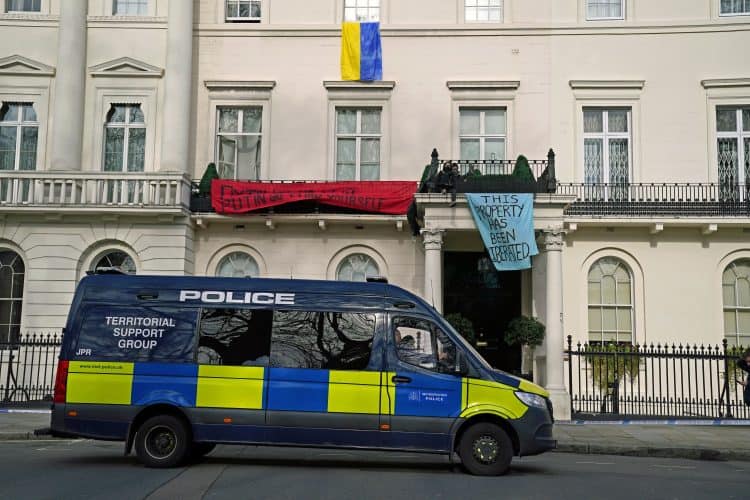 Riot police are attempting to evict squatters who have occupied the London mansion of a Russian billionaire who has been hit by sanctions.

Banners on the £25,000,000 property in Belgrave Square, near Knightsbridge, read: ‘This property has been liberated’, Putin go f*** yourself’ and ‘power breed parasites’.

Answering reporters’ questions, one of the men said there are five of them inside the mansion but they have a “way bigger group coming”.

He added that they broke into the property at around 1am.

“We stay here until Putin stops the war,” one man said.

He continued: “We have opened the building to house Ukrainian refugees and refugees from all nations.”

He also said the owner of the building “wants to destroy Ukraine homes”.

“He supported the wars. This home belongs to Ukrainian refugees. There are families dying. Their land has gone. This is the least we can do.”

Talking about finding housing for refugees, another said: “Priti Patel, do not worry. We did your job.

Asked whether they have enough food and drink, one protestor said: “This bastard left the basement full of alcohol but left no food.

“We have everything we need but we do not have food, so if anyone could provide us with food and we can lift it up with a rope, that would be really appreciated.”

However,now officers from the Metropolitan Police moved in en masse, in an apparent attempt to end the demonstration at the property.

However, the levelling up minister conceded there would be a “high legal bar to cross” in using frozen assets – and suggested it could only house refugees temporarily.

London Mayor Sadiq Khan said it would be a form of “poetic justice” to repurpose the mansions.

He told Times Radio: “I, for some time, with others, have been complaining about those Russian oligarchs close to (Vladimir) Putin, using our city to launder money by buying homes or businesses. And what’s doubly heart-breaking about the homes they buy is they’re left empty for years. They’re not homes, they’re gold bricks used to launder money.

“I think the Government should be seizing them, and before selling them – because they’ll take some time – they should be using them to house those Ukrainians who are fleeing Ukraine, who we’ll be offering a safe haven in London.

“It’s a form of poetic justice, but also it’s a good use of these many, many empty properties sitting across London simply with dust being gathered inside rather than them being used to house people who need homes.”

Asked if he would be willing to host a refugee, Mr Khan told Good Morning Britain: “Personally we won’t be able to because of space and other security issues, but I admire the generosity of those Londoners, and we know our city is a very generous city.”