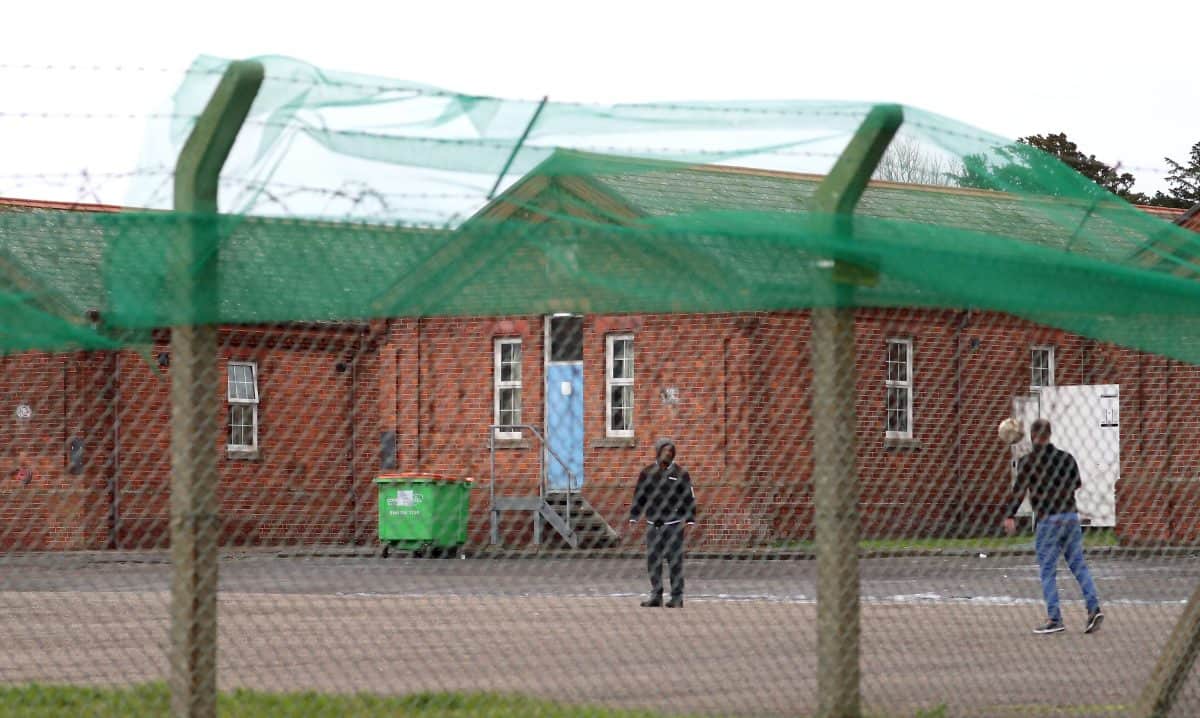 Police have defended using force on an asylum seeker to move him back into Napier Barracks after a video of the incident drew criticism.

The man, believed to be a resident of the controversial Kent barracks, is seen being lifted by his arms and legs and forcibly moved back through the gates.

Police say “reasonable force” was used to “return him safely back inside” because they say he had been directed to self-isolate.

However, human rights barrister Adam Wagner said the footage was “very troubling”, adding that he was “dubious” about the legal basis for the use of force.

Bella Sankey, from charity Detention Action, likened the conditions at Napier Barracks and the enforcement to an “internment camp”.

Asylum seekers are not detained at the army barracks and are free to leave, but must obey lockdown restrictions.

In recent weeks an outbreak of coronavirus at the barracks in Folkestone, Kent, has seen 120 people test positive for the virus.

The incident caught on video is believed to have happened on Wednesday.

According to the National Police Chiefs’ Council, if a constable or PCSO considers that a notified person is away from the place where they are self-isolating (and that no exceptions apply), they can:

Reasonable force may only be used by a constable, where necessary, in the exercise of the power to remove.

The guidance states that such powers should only be used where it is a “necessary and proportionate means of ensuring compliance with the requirement to self-isolate”.

The 1 minute 16 second video clip, shared with the PA news agency by migrant charity Care4Calais, appears to show a number of police gathered outside the barracks gates.

Towards the end of the video, the man is seen being lifted through the open gate and set down on the wet tarmac a few feet inside.

Kent Police said officers “engaged with a man to explain and encourage him to follow government regulations and return to the site”.

However the force said he refused and officers were required to use “reasonable force to physically return him safely back inside” and no enforcement action was taken.

On the use of force, Kent Police added: “Service users at the Napier Barracks site are currently required by law to self-isolate within the grounds of the site following a localised outbreak of Covid-19.

“As such, when officers attended the site on 3 February following reports of a service user leaving the site, officers were required to use reasonable force to return the individual back to the venue.

“Police officers are permitted to use reasonable force in circumstances where they believe it to be appropriate in the prevention of crime under the Criminal Law Act 1967.”

Mr Wagner commented on the video on Twitter, saying: “This is very troubling footage. These are not detainees. I am dubious that there is a legal basis for the police using force.

“There is a power under the self-isolation regulations to use reasonable force to return somebody to the place they are supposed to be isolating but as far as I know, people at barracks weren’t given formal notifications to self-isolate… and therefore there was no power of enforcement”.

Bella Sankey, director of Detention Action, said: “It was only a matter of time before Covid ripped through Napier barracks.

“Now the heavy-handed police enforcement of regulations turns this facility into an internment camp, detaining some of the world’s most traumatised people.”

Sam Grant, head of policy and campaigns at human rights advocacy group Liberty, said: “While coronavirus regulations are framed as being for the good of public health, that is meaningless if the places people are forced to stay in are dangerous.

“This is the sharp end of the hostile environment and a pandemic response that has abandoned and put at risk some of the most marginalised people in the UK.”

Police said the asylum seeker was later seen outside the barracks again and allegedly assaulted an officer and was arrested and taken into custody.

Related: This thread from a refugee held in ‘prison camp’ barracks is harrowing